Irish immigrant John H. Smith completed the section of four Federal row houses, originally five, in 1837. The fifth was destroyed in 1950. The properties are steeped in history. This Federal style set of buildings has endured stages of disrepair and fire, but remains one of the storied set of buildings in the city. 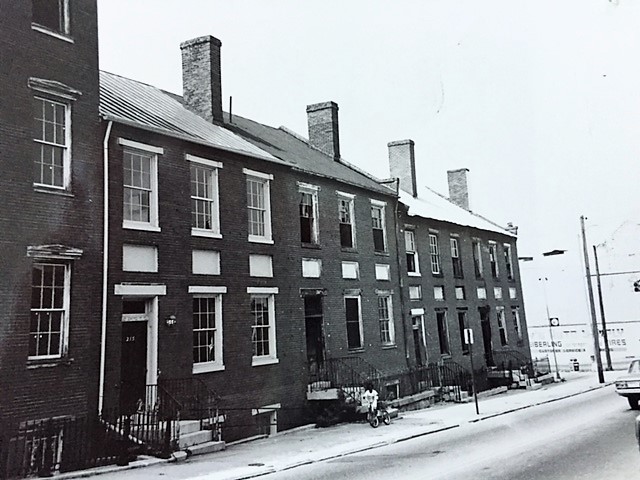 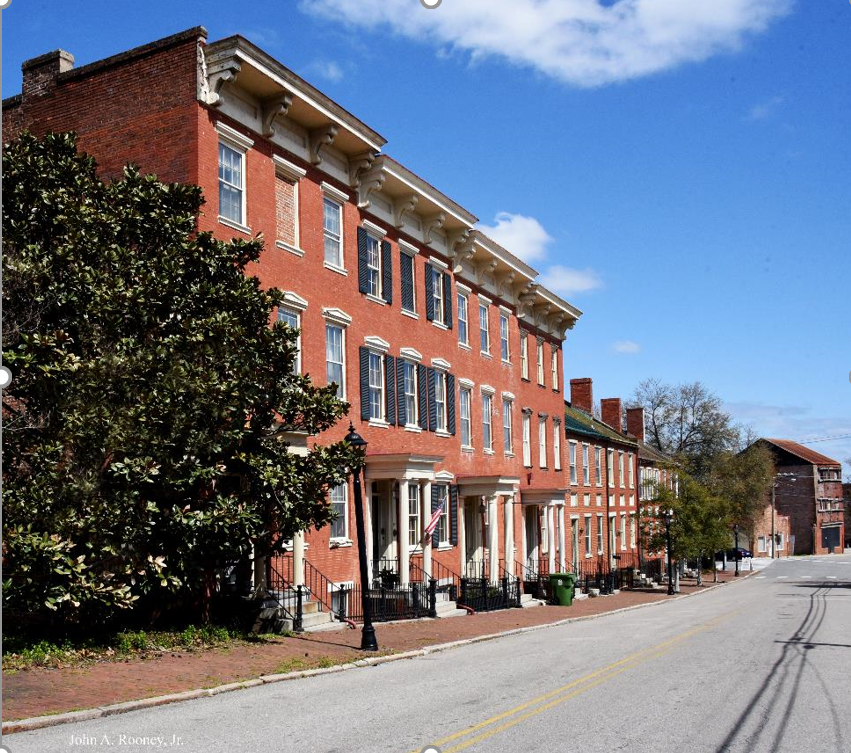 Irish immigrant John H. Smith completed the section of four Federal row houses, originally five, in 1837. The fifth was destroyed in 1950. The properties are steeped in history. Smith was a significant stockholder in railroad and manufacturing companies. He was also involved with the Petersburg Theatre. The 211 unit was occupied by members of the Shippen family from Pennsylvania who held political office there and had substantial influence in medical science development. One notable individual, born at 215 High Street, was Charles Jackson Pannill. He is known as a pioneer in the field of radio. In 1912, Pannill was the recipient of the first certificate of skill in radio communication issued by the United States government, which licensed him as a wireless operator. He sent the first wireless message across the Atlantic Ocean from Massachusetts to Scotland in 1906. Subsequent positions included superintendent of installation and operation of the Marconi Wireless Telegraph Company of American, assistant to the director of naval communications, and president of the Independent Wireless Telegraph Company and the Radiomarine Corporation of America (RCA). Pannill received numerous awards for his work, including the decoration by King of the Belgians as a Chevalier of the Order of Leopold. His father had been a Captain in the Confederate States Army. William Pannill, his grandfather, was mayor of Petersburg and president of the Southside Railroad from 1850-1857.

This Federal style set of buildings has endured stages of disrepair and fire, but remains one of the storied set of buildings in the city. The gabled roofing has a tin covering with ribs 18” to 24” and steps down with the sloping streetscape. Between the first- and second-story windows are recessed panels and bull’s-eye blocks at either end exists on the lintels of every opening. These two-story homes are constructed over raised basements with five-course American-bond brickwork. Three dormers are on the four units, each centered about the unit and all on the rear. Unit 213 has a trapdoor to the roof in the same location as the dormers. Eight brick chimneys are located along the entire row, two for each unit. They are located along party walls to the left of the front entrance of each. Iron fencing with antherion-motif and elaborate wood carvings still exist on the exterior. A transom exists over the door in number 213. It is a moulded wood lattice set in glass and painted. Original windows have thick wooden sills and lintels set in the brick wall, with moulded wood roundels at each side of the lintel. These windows are double hung with six lights and four bays per unit.

Interior floor plans are similar, but not alike depending on the modifications throughout its lifespan. The first floor plan is box-shaped with a single loaded entry corridor along the left party wall. High ceilings are in the two rooms, along with a fireplace. The stairs to the second floor are directly opposite the front door, and at the rear of the entry hall. Second floors have two rooms off of the hallway and a smaller room at the end of the hall. One room exists in the attic and basement. Several have additions at the rear. Ornamental newel posts exists at the base of the rail on the first floor, with scrolled wood moulding on the side of each riser. Original wood plank flooring exists in many rooms. All walls were originally plaster on brick. Several fireplaces have ornate cast-iron mantels. Cast-iron fencing along the sidewalks in the front of the row are capped by flowered palmette. Some have had the gates removed and other modifications have been made.