Dead Horse Point State Park is a state park of Utah featuring a beautiful overlook of the Colorado River and Canyonlands National Park. The park covers 5,362 acres of high desert at an altitude of 5,900ft. The park is known for it's amazing views and recreational opportunity. the legend of the wild mustangs is how the state park received it's current name, Dead Horse Point State Park. 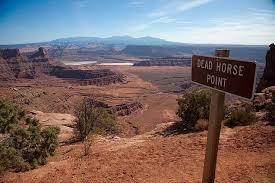 Dead Horse Point State Park is a famous overlook above the the Colorado River and Canyonlands National Park. The park covers 5,362 acres of high desert at an altitude of 5,900ft. Millions of years of geologic activity created the beautiful views at Dead Horse Point State Park. Deposition of sediments by ancient oceans, freshwater lakes, streams and wind blown sand dunes created the rock layers of canyon country of this park. Igneous activity formed the high mountains in this park that rise like "cool blue islands" from the desert below.

The legend of Dead Horse Point says that before the turn of the 19th century, the point was used as a corral for wild mustangs roaming the mesa top. Cowboys herded the mustangs across the narrow neck of land and onto the point.  The neck was then fenced off with branches and brush.  For an unknown reason, horses were left corralled on the waterless point where they died of thirst within view of the Colorado River 2,000 ft. below.

The park is known for various recreational activity, including a scenci drive, hiking, biking, and camping. Mountain Biking enthusits are known to love the Intrepid Trail System at Dead Horse Point.  With slickrock sections, looping singletrack, sandy washes, and incredible scenery, the Intrepid Trail System provides a great  idea of what Moab mountain biking consists of. There are miles of pet-friendly developed hiking trails in the park, including a paved trail that provides easy access to some of the park's most scenic views.