Kodachrome Basin is a state park of Utah, United States. It is situated 5,800 feet above sea level, 12 miles south of Utah Route 12, and 20 miles southeast of Bryce Canyon National Park 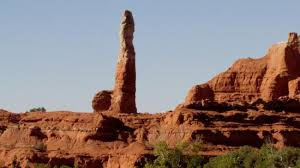 Kodachrome Basin State Park is a state park known for its scenic sand pipes. These sand pipes are the main attraction, with the Chimney Rock being the largest spire towering at 170ft. tall. Various recreational activities are enjoyed at this park such as hiking, biking, and camping. Several trails run throughout the park, including the Grand Parade Trail in which is an easy, 1 mile scneic trail. Hikers are known to enjoy the Shakespeare Arch, Angel’s Palace, Eagle’s View Overlook, Panorama Trail, Ballerina Slipper formation, and the Big Bear Geyser/Cool Cave Trail.

The park's landscape resembles that of the Yellowstone National Park. The well-known sand pipes are believed to be remnants of solidified sediment that filled the ancient geysers and dominated the landscape. It is believed that the red, brown, white, and yellow layers of sediment became exposed as outer layers of Entrada sandstone eroded. These multi-colored sand pipes range in height from 6 ft. to 170 ft.