Established in 1968 by poet Margaret Walker, this organization headquartered at Jackson State's Ayer Hall serves as both an archive and museum of African American culture and history. The organization sponsors a variety of public programs throughout the year and also serves as the library of record and repository for several important archival collections.

The Center was founded by the poet Margaret Walker in 1968 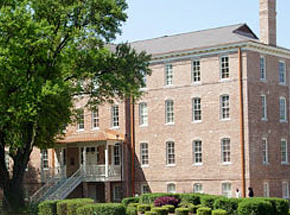 Ayer Hall was constructed in 1903 and named after college president Charles Ayer. The building is the oldest remaining structure on the Jackson State campus. The university dates back to a small church-operated school organized by the American Baptist Home Mission Society in 1877 for recently-emancipated former slaves in Natchez, Mississippi. Five years after that small school was established, the school transferred to Jackson and construction of the first campus building began a few years later. The college became known as Mississippi Negro Training School in 1940 and became Jackson State College in 1967.