During the era of segregation, traveling African Americans had few options for lodging. In Jackson, many Black musicians stayed at the Summers Hotel, established in 1944 by W.J. Summers. In 1966, Summers opened a club in the hotel basement that he called the Subway Lounge. The Subway began as a regular jazz venue and offered popular late night blues shows from the mid-1980s until the hotel's demolition in 2004. 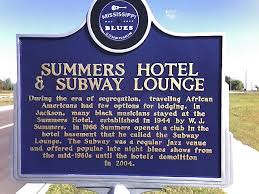 During the segregated 1940s, ’50s, and ’60s, the two main Jackson hotels open to African Americans were the Edward Lee Hotel on Church Street and the Summers Hotel. The Summers Hotel, originally the Maples, a rooming house for whites, stood here at 619 W. Pearl Street. The building was remodeled and renamed the Summers Hotel in 1943 after its purchase by W. J. Summers (1897-1977), a prominent African American businessman, who ran the hotel with his wife Elma. The hotel was popular among touring musicians, including James Brown, Hank Ballard, and Nat "King" Cole.