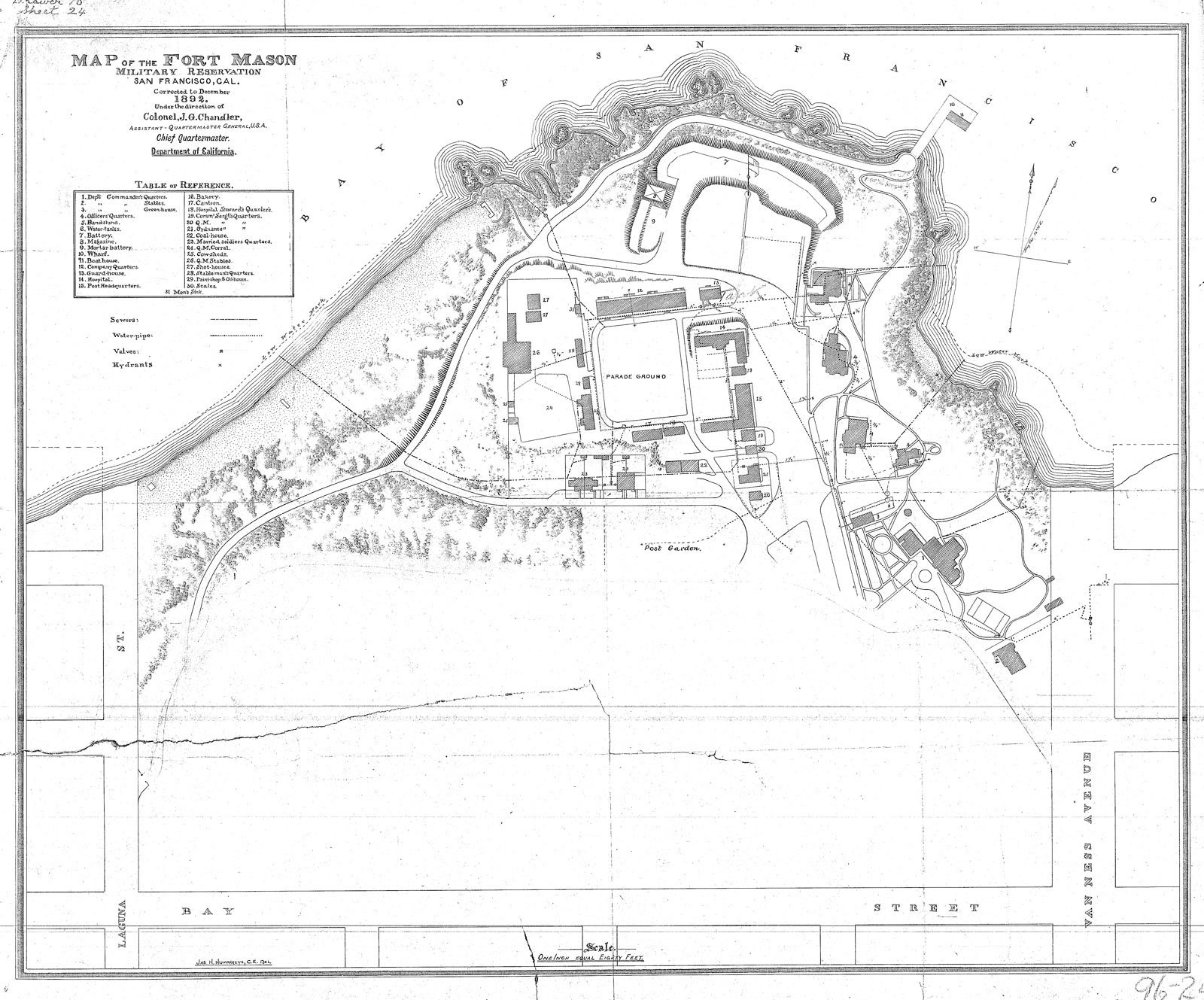 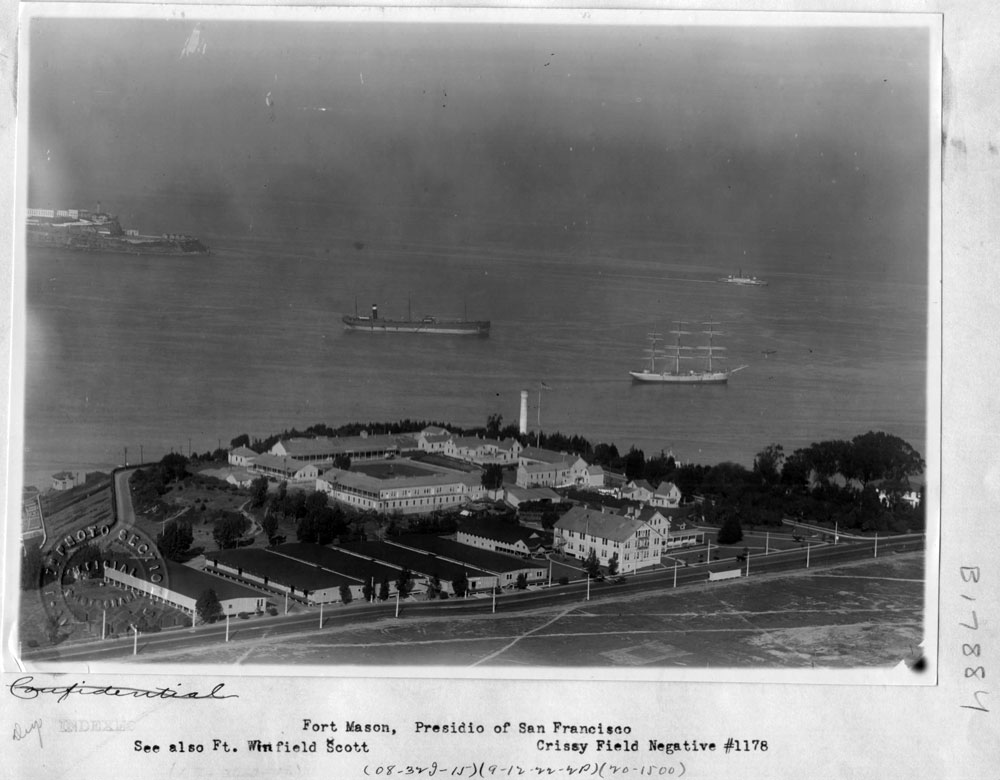 Soldiers being fed cookies and coffee by the American Red Cross 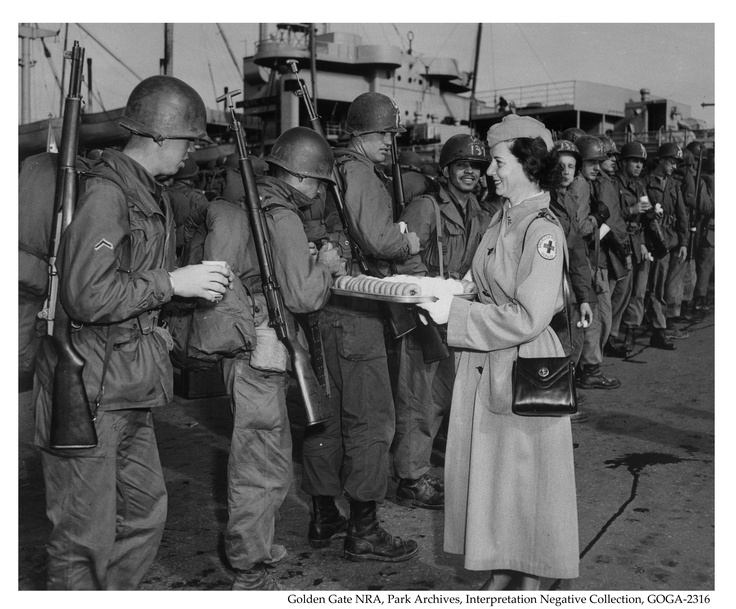 This photo shows the San Francisco Port of Embarkation in action: 4 large army transport ships are docked alongside the loading piers, ready to accept goods from the adjacent warehouses. Photo circa 1920s. 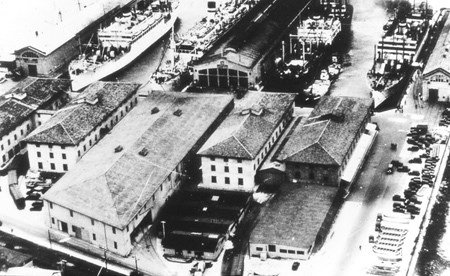 During the Spanish and Mexican periods, the governments recognized it as an ideal spot to fortify; in 1797, the Spanish built the Bateria de Yerba Buena, equipped with five eight-pound cannons. In an effort to strengthen the defenses of San Francisco Bay, Governor Diego de Borica decided to construct a battery to protect the quiet cove immediately to the east of Point Medanos (now known as Fort Mason). The new installation was named Bateria San Jose but soon became known as Bateria de Yerba Buena. In 1806 Governor Arrillega's inspection of the fort reported that three of its five cannons were functional, and there was substantial damage to the battery structures. In 1822, after a successful Mexican revolt against the Spanish empire, the derelict Bateria de Yerba Buena came under the auspices of the Mexican government.

After the Bear Flag Revolt in 1846, the United States took control of California, and three years later, gold was discovered in California. San Francisco had evolved from a sleepy port town into a very rich and profitable city; a city within a state that the U.S. government now had a great interest in protecting. In an effort to protect what was now theirs, in 1851 the U.S. Army established this overlook area as a United States military reservation, designating it Point San Jose.

Until the breakout of the American Civil War, Fort Mason was known to the local population as "Black Point". Black Point became a home to a group of wealthy, well-educated civilians, many who were committed to the anti-slavery movement. While this land belonged to the War Department they never created any buildings or installations to house soldiers. With the discovery of gold in California the San Francisco Bay area surged in population and housing was required to hold these people, so ambitious real estate developers quietly moved onto the military land and began to construct their own private homes.

With the of the outbreak of the Civil War the War Department was forced to take back Black Point rename it back to Point San Jose and evict all residents from the area. Point San Jose would be remade into the typical late 19th-century style fort with main parade ground, an open grassy square dedicated to drills, marches, parades and public ceremonies. The most significant military buildings, like the post headquarters, the hospital, the barracks and the mess halls were constructed on a rectangular grid around the main parade ground. Unlike other forts around the country, the officers quarters would become the homes of the evicted residents who were forced to leave their homes. Fearing an attack from Confederate ships on merchant shipping the Union in 1864 fortified Point San Jose with more coastal defenses. In 1882, the post was renamed Fort Mason to honor Colonel Richard Barnes Mason, the second military governor and commander of California.

By the start of WWII, Fort Mason would be transformed from a harbor defense post into a logistical and transport hub for American military operations in the Pacific. During World War II, Fort Mason served as the headquarters for the San Francisco Port of Embarkation, the nerve center of a vast network of shipping facilities that spread throughout the Bay Area. After the war's end and throughout the 1960s many forts along with Fort Mason would be deemed unfit for military use and be turned into national parks for recreational oppurtunities for all citizens.