Rosedown Plantation was established in the 1830s by Daniel and Martha Turnbull and encompassed 3,455 acres during the antebellum period. 450 enslaved African Americans lived and labored to build and maintain the property, including the gardens which have been restored to almost their original form. The massive plantation included living quarters and a church for enslaved laborers. After the Civil War, the plantation was home to sharecroppers and the property stayed in the Turnball family until the 1950s. The plantation has been operated by the state of Louisiana as a historic park and encompasses 374 acres off Louisiana Highway 10.

Front view of the main house at the plantation

Front view of the main house through the alley of oaks 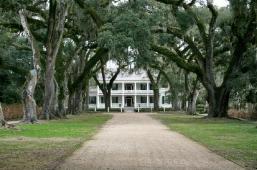 Doctor's office on the property

Statue of the Personification of Africa in the Rosedown gardens, by Francis Benjamin Johnston 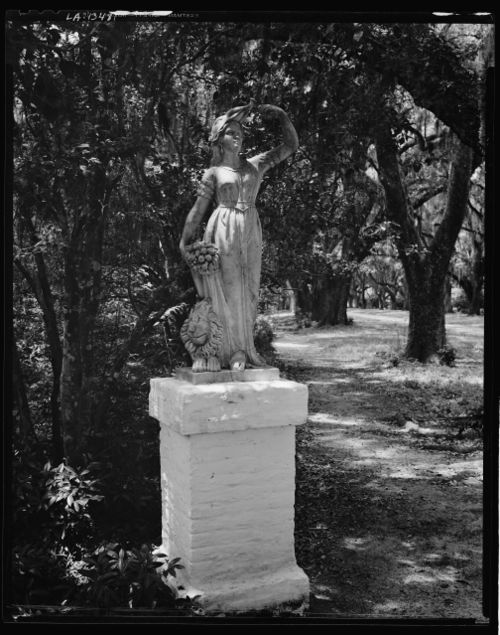 The Rosedown Plantation in St. Francisville, Louisiana, is known as part of a “plantation corridor” stretching from Natchez, Mississippi into Louisiana. Before construction on the main house began in 1834 by then-owners Daniel and Martha Hilliard Barrow Turnbull, and constructed by Wendell Wright, the land was originally part of a Spanish Land Grant issued when the “Florida Parishes” were under control of Spain. After seven more purchases from the 1820s to 1840s, the plantation was 3,455 acres. Well-traveled, the Turnbulls named the plantation after a play they had seen on their honeymoon, designing the estate in a Federal-Greek Revival style with two Grecian-style wings added by T.S. Williams around 1844-1845. It was furnished with imported pieces from the North and Europe, some of which are still on display today.

At least 450 people were enslaved to maintain the property, which was partially funded with profits from the Turnbull’s other plantations: Inheritance, Desoto, and Styopa. A 660-foot-long avenue of oaks leads up to the house with statues from Italy purchased by the Turnbulls in 1851 standing between them; in the 19th century, properties were measured in 66-foot-long chains, making it 10 chains long. There were other structures surrounding the property as well: a Greek temple-style doctor’s office, three summer houses, a hot house, a milk house, a wood shed, a kitchen, a barn, and it may have also included a cemetery. The land also extended beyond the structures, with space for fodder crops, pastureland for cattle, yards and pens for farm animals, horse stables, and a church and living quarters for enslaved African Americans. By 1860, 145 slaves lived in 25 houses on the farm.

Slave work on the plantation was noted as carpenters, Blacksmiths, cooks, carriage drivers, house servants, and washer women; yet, the most essential job was likely those of the gardeners. It is believed the gardens began in 1836 when Martha Turnbull started a garden diary, which lasted until 1895, one year before her death, and they remain as one of the most prominent features of the plantation. Sitting on 28 acres, the gardens contained fountains, winding paths, statues, ornamental plants and flowers, and the summer houses, making it one of the largest private formal gardens of the 19th century. Most notably, however, was the type of plants in the garden. Martha relied heavily on imports from Asia, such as azaleas and crepe myrtles; one of the first plantings of camellias in the Deep South took place at Rosedown. The only professional gardener in her diary was Samuel Richardson, who left her service in November of 1847. However, Martha noted by name several enslaved workers: Moses, Charles, Ben, Primus, Augustus, Dave, Jane, and Jim, ranging from 16 to 31 years old. The gardens were so important, Martha continued to tend to them after the death of her husband, Daniel, in 1861, after the Civil War, and after the emancipation of her enslaved workers.

The Turnbull family continued to live on the property through the 1950s, despite a nearby battle at Port Hudson during the Civil War. In 1956, the estate was purchased by Catherine Fondren Underwood, and she began an eight-year restoration of the house and formal gardens. The gardens were reconstructed by Ralph Ellis Gunn using Martha’s diaries. When plants from Martha’s inventory were unavailable, they were propagated from plant stock surviving in the gardens, returning them to almost their exact original state, which can be viewed today.

The house, formal gardens, and 13 other structures now remain on about 364 preserved acres of land. It was purchased by the state of Louisiana in 2000 and is now maintained by the Office of State Parks. The site is a National Historic Landmark.