Camp William Penn was the first and biggest military training camp created for African American troops during the Civil War. The troops started to enlist in the Union army in 1863, after President Lincoln signed the Emancipation Proclamation in January of that year. The camp was created in June of 1863 and over 10,500 troops and 11 regiments trained at the camp. Today, the camp's location is part of the La Mott Historic District in Pennsylvania.

Camp William Penn was created in June of 1863 and was the first and biggest military training camp for African American troops in the country. 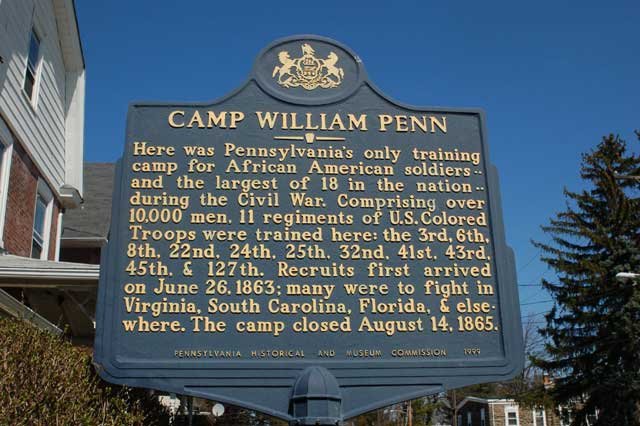 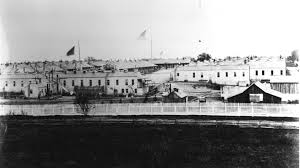 Over 10,500 troops and 11 regiments were trained at Camp William Penn. 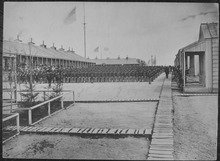 During the beginning of the Civil War, President Abraham Lincoln did not want African American men enlisted in the Union army due to his fear that people in the border states would officially side with the Confederacy. Another factor in Lincoln’s anxiety was the fact that many people in the North still discriminated against Blacks and were uneasy about the idea of arming African Americans. However, Lincoln soon started to believe that the Union could lose the war if Blacks were not allowed to enlist or be recruited. When Lincoln passed the Emancipation Proclamation in January 1863, African American regiments were officially allowed in the Union army. The U.S. War Department passed General Order 143 on May 22, 1863, creating the United States Bureau of Colored Troops.

In the first half of 1863, the Confederate army marched through Lancaster and Gettysburg, where they took African American Pennsylvanians as slaves. Fearing enslavement, several African American men in the state enlisted with the Union army. In response to the number of African American men enlisting, Camp William Penn was created in June as the first and biggest place built to train African American troops only, in the Civil War. Over 10,500 troops and 11 regiments were trained at the camp in the Cheltenham Township in Pennsylvania. The Union League, a group of white men who were allied with Lincoln and the Union, provided $100,000 to create Camp William Penn. The Supervisory Committee to Recruit Officers for Negro Troops created the Free Military School for the Applicants for the Command of Colored Troops. The officers chosen to lead the regiments were white and had to undergo a fitness test to see if they were able to train Black troops.

The camp was constructed on land belonging to Edward M. Davis, Lucretia Mott’s son-in-law. Mott was a famous abolitionist in the area, and before the camp was built, its tents were placed alongside Mott’s home, which was a significant place on the Underground Railroad. The home and camp brought in significant anti-slavery abolitionists and Underground Railroad leaders like Frederick Douglass, Harriet Tubman, Sojourner Truth, Robert Purvis, and William Still. During drills, the Black troops occasionally saluted Lucretia Mott as she gazed from her home. Churches and women’s groups provided supplies to the troops at the camp while an African American artist, David Bustill Bowser, created the regimental flags.

The troops that were trained at Camp William Penn were part of over 180,000 African American troops who took part in battles in the Civil War and experienced deep casualties. The troops from the camp also chased President Lincoln’s assassins and took part in his funeral procession. Following the war, Edward Davis split the land and sold it. Among some of the buyers were the African American and Irish servants who were employed on local properties. The town became La Mott, after Lucretia Mott, and was known as one of the initial interracial communities in the country. In response, the town was added to the National Register of Historic Places and was certified as a historic district by the Cheltenham Township. In present day La Mott, only parts of the camp remain; the repaired front gates are still there.