Built in 1929 by a local carpenter, Hampton Colored School served to educate the black children of Hampton, South Carolina. The schoolhouse replaced an older standing building and, until 1947, was the lone educational structure for African-Americans in Hampton. Today the building has been renovated and restored to its former glory, and it stands to serve as a historical presence, showing the history of American education and the African-American history of Hampton. The schoolhouse is marked with a standing plaque near the road and also a marker for the National Register of Historic Places.

Marker on the building, located between the two front doors, for The National Register of Historic Places 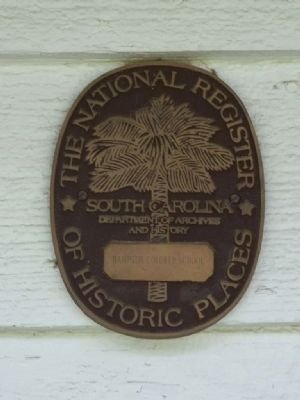 Photo of the front of the school, taken before any renovations 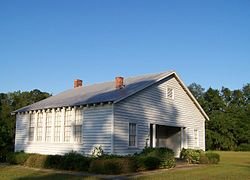 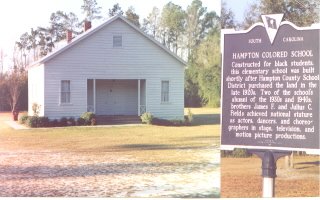 With the first and only African-American schoolhouse in Hampton being made in 1898, by 1927 the time had come to look to replace the dilapidated learning center. With plans being made, the board of education would purchase an acre of land to set aside for the planned building. In 1929, an additional two acres was donated generously by C.H. Hazel, Hallie Youmans, and Ervin Johnson, the latter of which was a carpenter who would help to construct the facility that would become Hampton Colored School.
Finally, that year, with three acres of land procured for the school's grounds, construction began. Johnson and local African-American volunteers would go on to build the then two room school house. The design is simple and models what many educational buildings were like at the time. The building is one story, had two rooms at the time of construction, and consists of a metal roof, clapboard siding, exposed rafters, as well as a brick pier foundation. The school was separated by a wall that split the building right down the center with each door in the front of the building opening up to that specific half, although part of the wall was made to be removable to open up the floor if need be.
When the school opened officially for the 1929 school year, it housed children through eighth grade and was open October through March. Because of a lack of funding, there were not enough resources to keep the school open the full duration of a normal term, therefore the children started later and ended earlier than neighboring schools. But through many donations from the local black community, the funds were raised to teach children the full school year. The school would be Hampton's primary and only source of learning for African-American children until 1947. Hampton Colored High School would be constructed, and Hampton Colored School would then, after having a doorway made between walls and a wall creating three rooms, become a cafeteria to serve the new high school.
After many years of use, Hampton Colored School today stands to serve as an important piece and symbol of history. There is a marker near the road in front of the school, pictured above, which was erected in 1989 by the Hampton County Historical Society, and there is also another one in between the two front doors claiming its place in the National Register of Historic Places, which became official on Feburary 28, 1991. The school has been renovated much to its former glory, appearing as a quaint, small, and simple building sitting in an open area of green grass. Today it gives a picture of what life was like in early 20th century schools and serves as an important piece of African-American history in the town of Hampton.