Located on land that was once home to the Piro, Fort Craig is located on the west bank of the Rio Grande River and was built by the US Army in 1854 to house troops who sought to control the lands and tribes in the region. Fort Craig was constructed also to defend recent settlers from powerful tribes such as the Apache and Comanche whose raids on area tribes and settlers continued for many years. The soldiers at the fort were given the mission of safeguarding traders and travelers on El Camino Real (Spanish for "The Royal Road") which was also known as "The King's Highway" given its connection to California's Spanish missions. The fort was also the site of first western battle of the Civil War. The Bureau of Land Management owns and operates Fort Craig. The site is a year-round family destination for hiking, photography, picnicking and self-guided tours. Like many stops on El Camino Real, Fort Craig Historic Site reflects on the Indian Wars, the Civil War, and the Western development of the United States of America. The outlines of the fort's remain and visitors are free to explore the area and learn more of the history of Native American tribes nd America's western expansion at the small visitors center.

Fort Craig Ruins. The fort was manned by Buffalo Soldiers of the 9th Cavalry and 38th and 125th Infantry as well as the New Mexico Volunteers-local men of Hispanic origin. 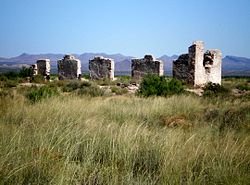 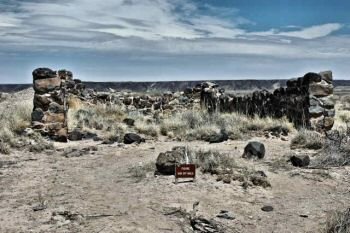 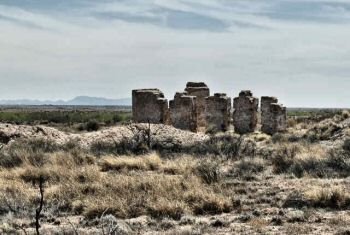 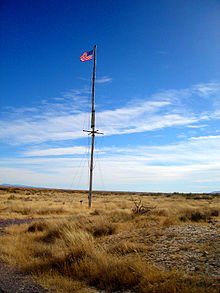 Fort Craig was established in 1854 and named after Captain Louis Craig of the 3rd US Infantry. In February of 1862, the fort supplied U.S. troops to stop the invasion of Texas Confederates under the command of General Henry H. Sibley and a contingent of New Mexico volunteers, commanded by Kit Carson. The day long Battle of Valverde on February 21, 1862, was a decisive Confederate victory. However, U.S. troops retreated into the fort, which was never attacked. Sibley's Confederates pressed northward to attack Albuquerque and Santa Fe.

The U.S. expansion westward following the Mexican-American War brought Spanish emigrants into this region. Naturally, the Native American Tribes did not appreciate the expansion that brought, what they considered, trespassers on their land. During the early 1860s, to defend against Indians, nearly 4,000 troops lived, worked, and socialized at the stone-and-adobe complex on the rugged outskirts of the San Mateo and Magdalena Mountains. Fort Craig was built as both a military fortress and a self-contained community and had everything from officers’ quarters, storehouses and horse stables; to a hospital, sutler’s store, blacksmith’s shop, carpentry shop, and more. Fort Craig's cottonwood-desert setting and rugged mountain outline were once a popular stationing request of troops. Officers’ children attended school, while enlisted men’s wives worked as laundresses for the community. Among the infantry and cavalry units who lived there were African American members of the Buffalo Soldiers who served within a segregated army that reflected the racial injustice of the nation they defended.

Fort Craig was the site of numerous campaigns against the Apache, Navajo and Comanche in order to both protect settlers from aggressive raids while also preserve the power of the United States and advance western expansion. Under the fort’s watchful eye, settlements like San Marcial to the north and Paraje to the south flourished as centers of the El Camino Real trade route. With the start of the Civil War in April of 1861, Fort Craig's location on the Royal Road led to it being the site of the first western battle of the Civil War.

US Department of the Interior Bureau of Land Management. For Craig Historic Site. . Accessed March 21, 2018. https://www.blm.gov/visit/fort-craig-historic-site.

This entry has been edited 33 times.