This historic complex of four buildings is home to the oldest community arts space in the United States. The organization dates back to the establishment of free art courses for workers at a woolen mill. Today, the organization continues to offer courses in art as well as a community art museum. The center of the complex is the former Church of the Evangelists constructed in 1857 as a mission for the poor and the adjacent former home of St. Martin's College for Indigent Boys which was constructed by the mission in 1906.

Sketch of the Museum documented in the NRHP Nomination Documents 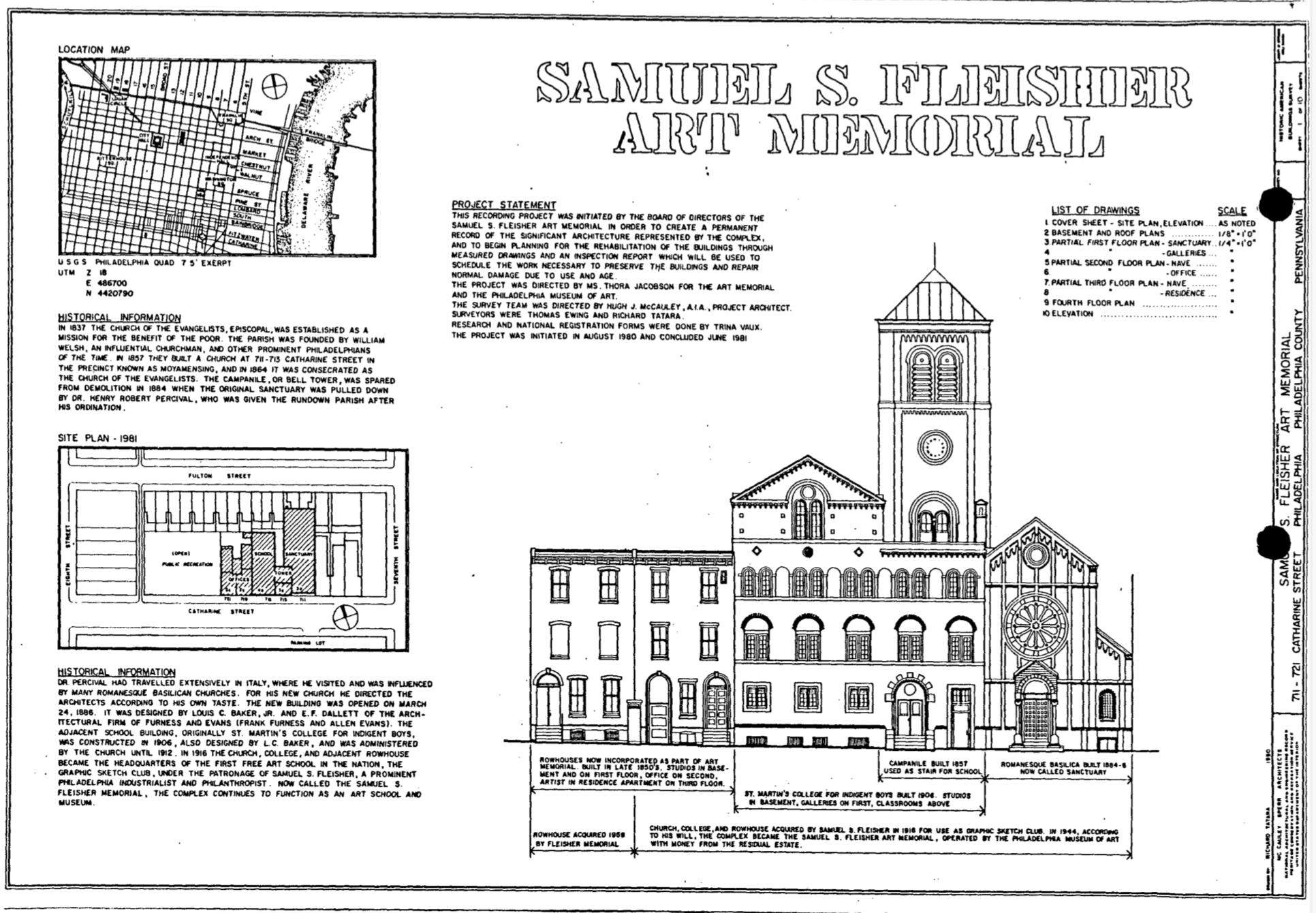 The Samuel S. Fleisher Art Memorial of South Philadelphia is housed within a historic complex of four buildings on Catherine Street. The art museum, still active to this day, represents the oldest community arts space in the United States. The organization itself dates back to the establishment of free art courses for workers at a nearby woolen mill. Today, the very same organization continues to offer courses in art as well as running a community art museum in the four-building complex. The center of the complex is the former Church of the Evangelists constructed in 1857 as a mission for the poor and the adjacent former home of St. Martin's College for Indigent Boys which was constructed by the mission in 1906.

The origins of this school date back to the Fleisher Yarn Company, founded by Jewish immigrants Simon B. and Moyer Fleisher in the late 19th century. Simon's son Samuel Fleisher became the Vice President of the company in 1892. A graduate of the University of Pennsylvania where he became familiar with the arts and humanities, Simon Fleisher expressed concern for many of the workers and their children. While he believed that "the world's work must be done" he had sympathy for the workers and wanted to offer a creative outlet to balance the rather dull routines of labor required to create his company's products. Hoping to create "playgrounds for the soul," Fleischer financed free art courses for mill workers and neighborhood children at the Jewish Union building in 1898.

Fleisher program grew into an organization known as the “Graphic Sketch Club” and soon acquired its own building at 740 Catherine Street.  Next door to the club building was the home of the Church of the Evangelists, Episcopal, a mission founded in the late 1830s to serve the poor populace of Catherine Street.  After years of congregation, the attendance (and, therefore, the funding) of the mission had begun to falter and nearly closed its doors.

In the mid-1880s, the congregation began to flourish again. Under the leadership of Henry Robert Percival, a young clergyman with a vision for the church that was both theological and architectural, the Catherine Street congregation grew.

Percival was something of a socialite, having many friends across the city who he encouraged to attend the congregation and to contribute to the vision he had for the building that housed it.  The newly-bolstered flock of believers brought a flow of financial support that enabled Percival to pursue the second half of his goals for the church: the architectural reimagining of the building.

In the redesign of the church, Percival set out to create a building he defined as such: “[The church] will have the same relative proportions of the Cathedral at Pisa, the square pillars will be like those in Saint Mark’s, Venice, and the Sanctuary shall be square as in the Cathedral, Orvieto.”  He hoped to see the church built in the Romanesque style of architecture; however, the final product was something much different yet no less incredible.

The architects hired, Louis C. Baker and E.J. Dallett created a building which was, as described by Trina Vaux in the official NRHP nomination registration, “more like San Zeno Maggiore in Verona, with a rood screen copied from St. Mark’s, Venice.”  Portions of the exterior, including two stone lions, were left uncarved to create the illusion that the building was ancient and gracefully worn.

The interior of the church was adorned with frescoes painted by members of the church interspersed with others created by well-known artists Robert Henri and Nicola d’Ascenzio, and the Italian marble of the interior came from Percival’s own collection.

When Percival finally retired in 1897, the church came under the care of Reverend Charles W. Robinson.  Robinson had a charitable heart, and this characteristic motivated him to found “St. Martin’s College for Indigent Boys,” a school which was intended to educate poor young men.  The organization was blind to faith, serving any young men that it could house, and was supported by the church.

The college, however, could not share space with the church, so Robinson commissioned Louis C. Baker to design the school building in a style that would match well with the design of the church itself.  The result was, architecturally, ideal.

Unfortunately, the church had begun to experience a flagging attendance, which was largely fueled by the fact that so many of the church’s attendees had come from beyond the neighborhood to hear and see Henry Robert Percival.  With Percival having retired, fewer and fewer were making the trip into the neighborhood.

As the church’s attendance waned, so did the college’s funding. By 1911, the college had all but failed. When Robinson retired that year, a Polish mission took up residence in the college building until 1913, at which point the buildings were sold.  The church, college, and adjacent buildings were purchased by Samuel S. Fleisher in 1916.

Fleisher’s Graphic Sketch Club would move into the building that year with the goal to become the first and only free, public, art school in the country.  The Club grew rapidly and was soon giving lessons and creative space to thousands of students.  Many of Philadelphia’s most accomplished and well-loved artists attended the school.

Over the years, Fleisher’s club grew into a foundational part of the neighborhood, acting as a solid, steady avenue for artists to learn, display their art, and meet other artists.  Fleisher’s convictions informed his leadership of the club; he very much believed that the world was a difficult place made easier by the arts.

Samuel Fleisher led the club until his death in 1944, leaving the school under the care of the Philadelphia Museum of Art.  In his will he requested the following message be placed outside the building:

“To the patrons of the busy streets of Philadelphia: Enter this Sanctuary for rest, meditation, and prayer; may the beauty within speak of the past and ever-continuing ways of God.”

In 1959, the Fleisher Art Memorial expanded, purchasing the row house nearby.  Through the decades, the Fleisher Art Memorial has flourished, celebrating the artistic legacy and heralding the artistic future of South Philadelphia. To this day, it is a thriving art museum that upholds the will of its founder, acting as a respite and refuge for the arts amidst the bustle of the city.