For over two centuries, visitors to Cazenovia have enjoyed strolling along the charming storefronts on Albany Street. The unique character of each building adds to a romantic sense of a time before big box stores, when local merchants served the needs of their community. The current buildings all date from the mid to late 1800’s, when they were rebuilt after a fire swept the area. Their styles run the gamut from a late Federal interpretation to a high Victorian, each one distinct in its design yet harmonious with the other buildings on the street. Traveling west from Lincklaen Street toward the lake on the north side of Albany Street, you first encounter what was known as the Hough block. Built in the 1830’s it originally served as a general store, and later as office space for William J. Hough. The third floor of the building was occupied by the studio of Cazenovia’s famed artist, William Boardman during the 1840’s and the village’s first entertainment hall, known as Hough’s Hall occupied the second floor during the middle of the 19th century. In 1871, a devastating fire ravaged the buildings to the west, leading the owners to add a then-popular mansard roof. Next door is a brick building, occupied by Cazenovia Abroad for over 50 years. It was rebuilt in 1872 by John Reymon with locally made bricks, the same as those used to build the Methodist Church on Lincklaen Street. Travelling west you arrive at Mulligan’s, which has occupied the wooden building since 1896. The building itself was rebuilt by Henry Groff in 1873 and was originally only two stories high. When Groff learned the building next door west would be four stories high, he had his structure cut horizontally and another floor added between, giving him three stories instead of two. The next two buildings were each rebuilt following the fire of 1871. The lot of the four-story Fairchild building, currently occupied by the Subway restaurant, was vacant for a number of years after the fire and was occasionally engaged by a peanut wagon until the current building was constructed. The largest structure on this side of Albany Street is the Dwyer building, which was built by Henry Ten Eyck in 1871 with bricks from the Bingley factory. It was within the original buildings on this site that the devastating fire of 1871 began. The handsome Federal style stone building just west of the Dwyer building was originally built as a banking house for the Madison County Bank in 1831. When the building was damaged in the fire of 1871, the stone façade was removed, and the structure rebuilt. Sometime later, the original façade was put back onto the building, though when or why it was replaced remains a mystery. The next two addresses, currently the home of Cazenovia Jewelry and Emma’s Café on Main, are part of the building built by Jacob Ten Eyck in 1832. The stone for the structure was quarried at Chittenango Falls and the carvers who worked on the building were said to be recently laid off by the completion of the nearby Erie Canal. Legend has it that an unknown man was buried at this site sometime before the construction of the storefronts. The final building on the north side of Albany Street is known as the Burr block, as it was built in 1871 by William M. Burr. It was built with bricks from the same Bingley factory as many other buildings throughout Cazenovia, including the Methodist Church. In 1894, the building was remodeled by Syracuse architect Archimedes Russell into the Cazenovia Arms hotel, and featured a veranda on the second and third floors. A wooden building behind the Burr block housed Cazenovia’s original newspaper, The Pilot, which eventually became the Cazenovia Republican of today. 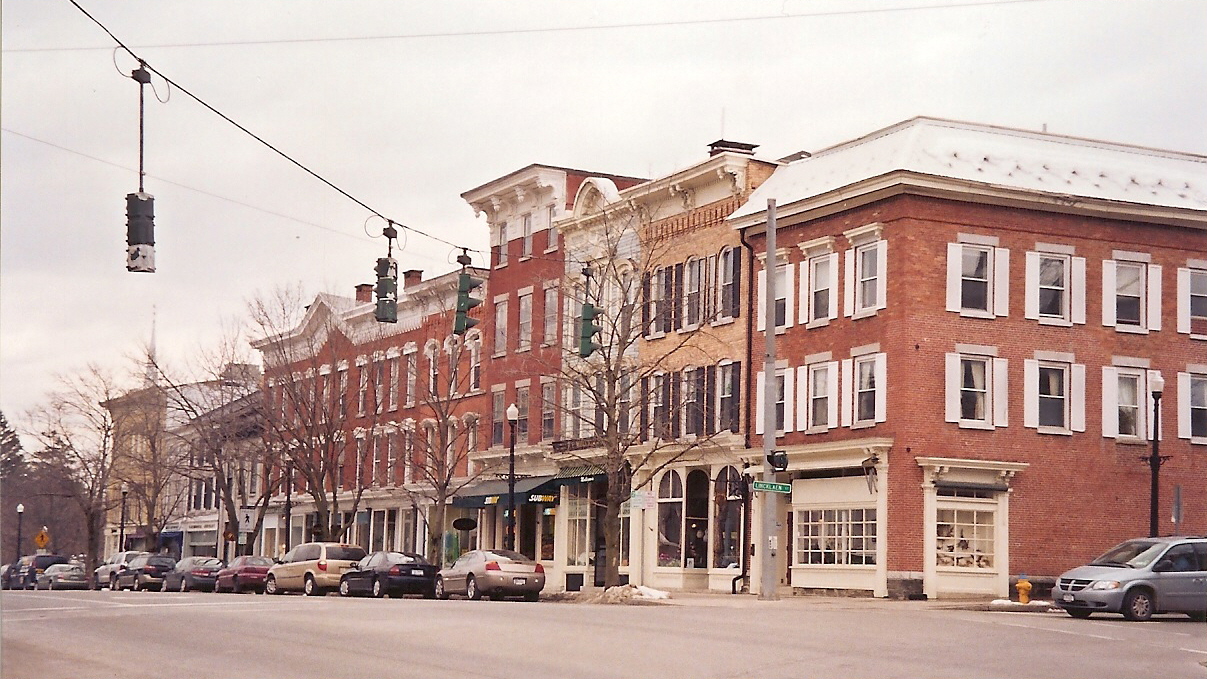