This statue was erected in 2005 to honor settler Joseph Whitford who is regarded as the founder of Fergus Falls. Born in 1830 near Montreal Canada, Whitford worked for James Fergus. In January of 1857, Fergus outfitted Whitford and two Métis Indians with a dog sled and gave them the assignment of finding a suitable townsite. He planned a city near what is now Central Dam in Fergus Falls and became the first resident of European descent. Whitford died near Fort Abercrombie, North Dakota during the U.S. and Dakota War of 1862. The statue marks the location where his log cabin stood. 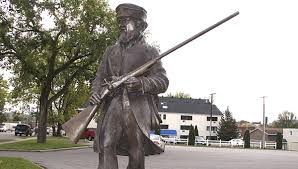 James Fergus was a businessman and land speculator who emigrated from Scotland.