Completed in 1895, the Confederate Monument in Louisville was built with funding from the Kentucky Women's Confederate Monument Association. In 2002 plans were initiated to make the monument part of a "Freedom Park" a public park that would include monuments to African American leaders and trees from historic Civil War battlefields. On November 17, 2008, funding was approved for that park. However, in 2016 the monument was removed to Brandenburg, Kentucky at the request of city and university leaders. The transformation of this urban landscape began with the creation of Charles H. Parrish, Jr. Freedom Park in 2012. Once located in the shadow of the Confederate Monument, Freedom Park commemorates the contributions of African American leaders in the city's civil rights era.

The monument is now located in Brandenburg, Kentucky 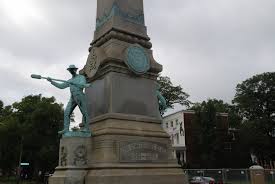 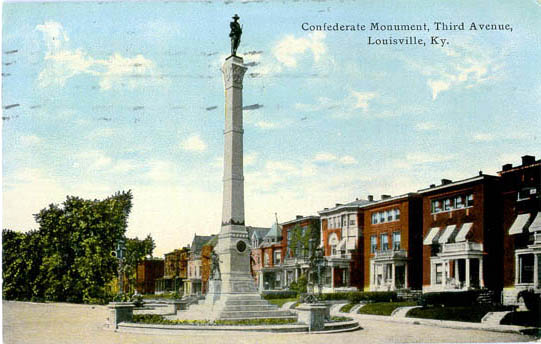 Since 2012, this interpretive memorial includes ten obelisks and ten panels that share the history of people and events related to African American history in Kentucky

This and other Confederate monuments continue were erected in the 1890s to both honor aging veterans and to defend the "Lost Cause" of the Confederacy. The connection between slavery and secession and the Confederacy, as well as the South's violent reaction to Reconstruction, serve as reminders of the relevance of the past and the meaning of monuments. For example, despite the fact that Kentucky rejected secession, there were more Confederate Monuments in Kentucky than Union monuments at the start of the 21st century. The city of Louisville's decision to remove this monument does not alter that ratio, as the monument was eagerly accepted by city leaders in Brandenburg, Kentucky. The Sons of Confederate Veterans attempted to stop the removal with a lawsuit, but a circuit court judge upheld the city's right to make the decision to remove the monument.