On August 30, 1856, a battle at this location pitted Free State men against those who hoped to extend slavery into Kansas Territory. One of several violent conflicts that led to Kansas Territory's nickname of "Bleeding Kansas" in 1856, this event also spread the fame of anti-slavery warrior John Brown. After pro-slavery men killed his son, and after hearing that they also planned to attack the anti-slavery settlers at Osawatomie, Brown and about thirty men moved to defend the community. Although outnumbered, John Brown's force attacked John Reid and his pro-slavery force of at least 250 "Border Ruffians"-a nickname given by local residents to Missouri men who hoped to extend slavery into the territory by violence and fraud. The battle lasted until Brown's men used most of their ammunition repelling the first wave of attackers. Before Reid could bring his cannon to bear against Brown and his men, the Free State men retreated in different routes to lure the pro-slavery forces away from the city. When the pro-slavery forces could not catch Brown's men, they returned and destroyed most of the town of Osawatomie simply because it was home to many Free State settlers who also opposed the extension of slavery into Kansas.

After recieving the news of his son's murder, John Brown took up arms to fight against the proslavery forces that invaded Osawatomie. 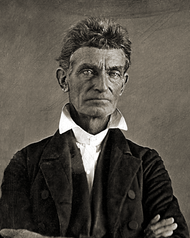 After John Brown's men fled, the proslavery forces burned the majority of the buildings in Osawatomie. 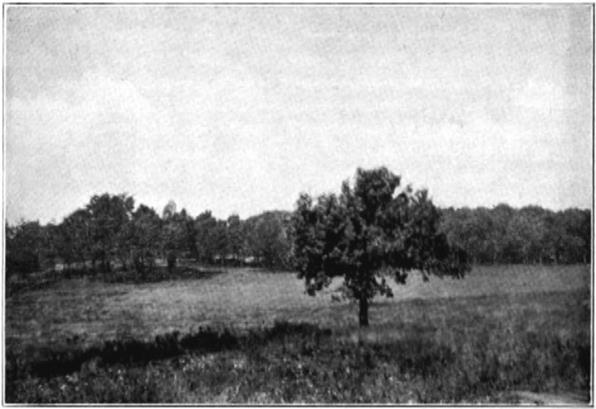 Several historical markers related to the battle have been placed in the area around the Adair Cabin. Photo by William Fischer, Jr. August 31, 2013 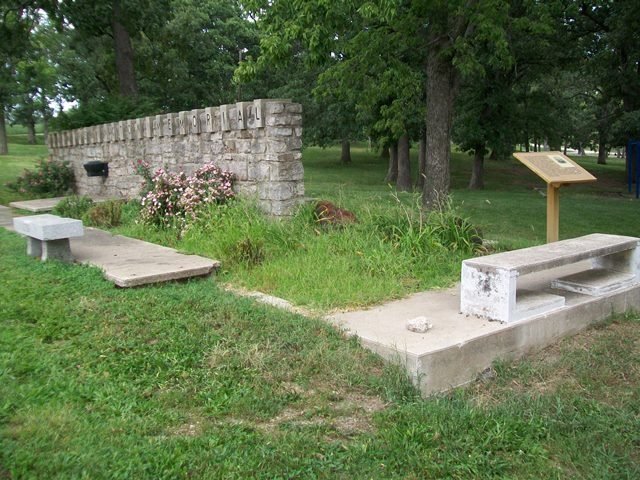 This marker was dedicated in 1909 and made possible by the efforts of the Kansas Woman's Relief Corps. Photo by William Fischer, Jr. August 31, 2013 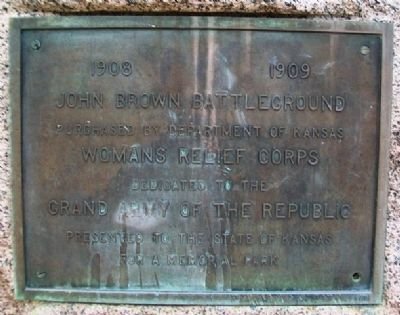 The term “Bleeding Kansas” was coined by newspaper editor Horace Greeley and was a reference to the violence that followed the Kansas-Nebraska Act of 1854. A compromise by politicians who hoped to avoid the controversy surrounding the question of slavery's extension into the West, the Kansas-Nebraska Act left the question of slavery in the territory up to the settlers. The practice was known as "popular sovereignty" and sounded democratic, but it also left many unanswered questions about when these elections would take place and how the vote might be monitored.

Most settlers who came to Kansas Territory did so in search of farmland and wished to avoid any political conflict-especially one stemming from an issue as controversial as slavery in the 1850s. However, pro-slavery men from neighboring Missouri and strong anti-slavery settlers from Northern states sought to guide the free or slave state decision in the favor of their side. By 1856, hundreds of pro-slavery men and thousands of Border Ruffians were resorting to violent methods-either to support slavery or simply as an excuse to rad frontier settlements. Free State settlers like Brown and his supporters responded in kind.

By the end of 1855 two different governments—one pro-slavery and one antislavery—were  in operation the Kansas territory. While Presidents Pierce and Buchanan supported the pro-slavery government, Republicans and several northern Democrats called it a fraud that was created by Missouri's Border Ruffians. The political strife soon turned to violence that would last for the rest of the decade. At the end of 1855 several people from Missouri had crossed into Kansas and were terrorizing Lawrence.

On May 21, 1856, the Missouri invaders attacked Lawrence. After this, John Brown and some of his supporters murdered five proslavery men at Pottawatomie Creek as retaliation. Over the next four months, a series of skirmished pitted Free State men against pro-slavery partisans at Black Jack, Franklin, Hickory Point, Slough Creek, and Osawatomie.

In September of 1856, John W. Geary was chosen as territorial governor and with the help of the federal army, the governor largely ended the war that had occurred along the border for the last four months. Despite this, and following the veto of the pro-slavery Lecompton Constitution in 1858, violence continued in Kansas from September 1856 to 1861.

The Battle of Osawatomie took place on August 30, 1856. By this time, several of Osawatomie’s residents had fled the city in response to constant from pro-slavery men who threatened this and other Free State communities. Skirmishes close to the town occurred between Free State and pro-slavery forces. Residents appealed to John Brown and his men as they learned that Border Ruffians from Missouri were preparing for a major attack on their community. Meanwhile in Lawrence, General James Lane was gathering a free state militia to protect free state supporters, he asked Frederick Brown and four more to come to Lawrence so that they would be aware of this plan.

John Reid led the pro-slavery forces and they initially chose this time to attack because they believed that John Brown and his men would be in Lawrence. Before launching the attack, Reid and his men met to decide which town to target. Captain Hiram Bledsoe believed that because of their superior numbers, they should make a point to annihilate Brown and his men. They also planned to burn Osawatomie. On August 30, the pro-slavery Baptist Reverend Martin White guided Reid’s 250-400 men into Osawatomie and they killed John Brown's son Frederick Brown. Upon learning of his son’s murder, Brown gathered forty of his supporters, including other sons, and defended the town. Although heavily outnumbered, Brown and his men had the protection of a stone corral that shielded them from the first wave of attack. Reid’s men charged towards the corral where Brown and his men were firing their rifles. The battle stopped when Brown’s men ran out of bullets, at which point they retreated through different routes.

After Reid’s men could not catch Brown’s men, they burned the majority of the buildings in Osawatomie and took six citizens as captives. From Osawatomie, Reid’s men marched to Topeka.  Along with Frederick Brown, four other free state supporters were killed. The battle strengthened John Brown’s resolve and he began to be called “Osawatomie Brown.”