In the heart of downtown San Antonio stands the Alamo Cenotaph. The Battle of the Alamo is the most well-known battle in the Texas Revolution. In fact, most would agree that the Battle of the Alamo is the pivotal point in the revolution and was essential to the victory of gaining independence from Mexico. Soaring sixty feet high and located alongside the surviving mission, San Antonio’s “Alamo Cenotaph” praises the men who gave their lives to defend the mission, rather than succumb and surrender to the overwhelming odds.

Front view of Travis and Crockett on the East side ledge. 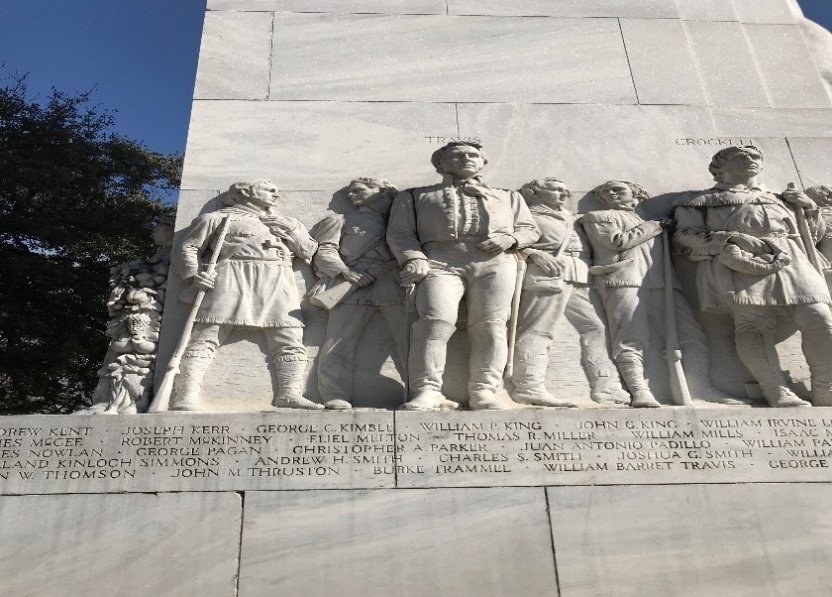 Front view of Bonham and Bowie on the West side ledge. 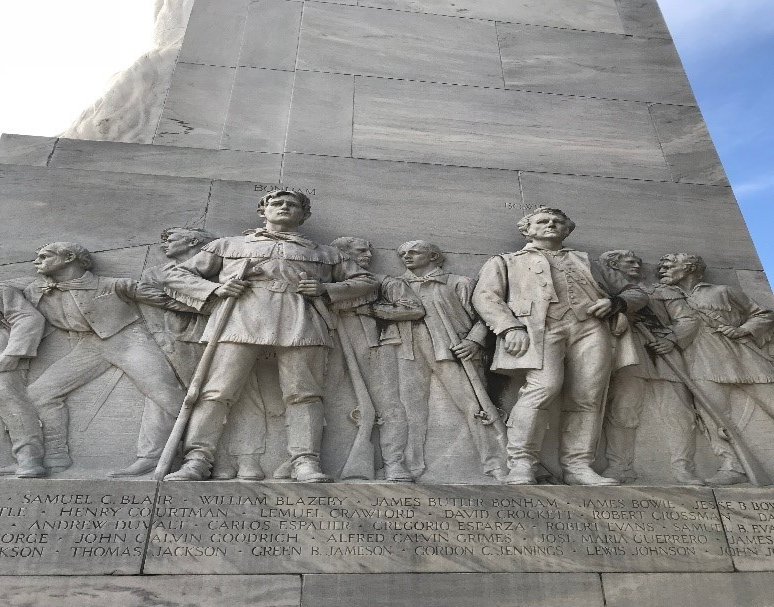 Side angle of Travis, Crockett, the eight soldiers, and the inscribed names of the fallen heroes.

Side angle view of Bonham, Bowie, the eight soldiers, and the inscribed names of the deceased soldiers. 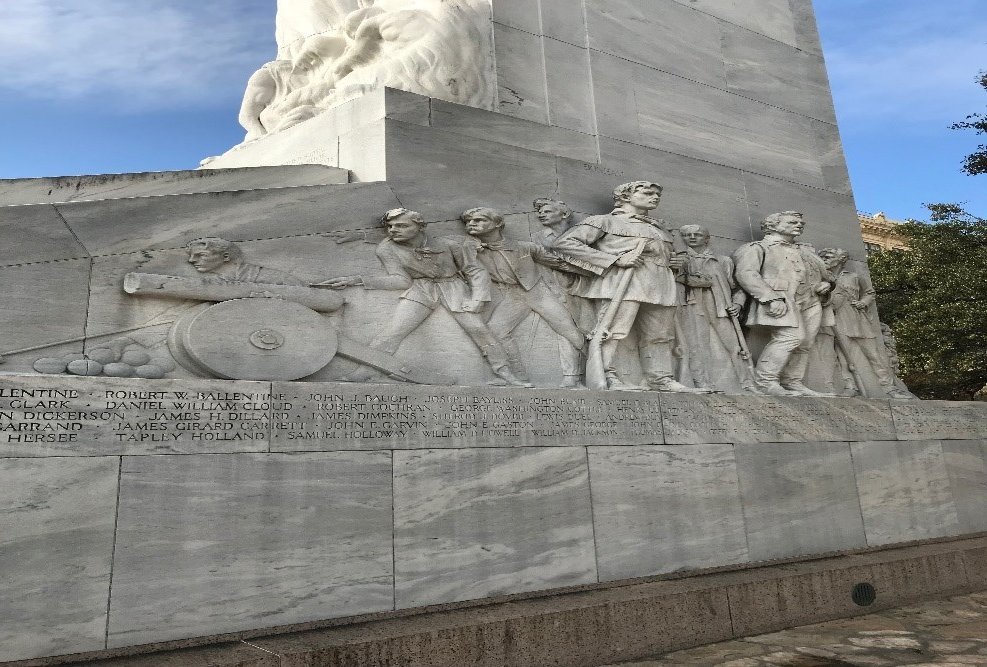 Man emerging from the flames on the Southern main face of the monument. 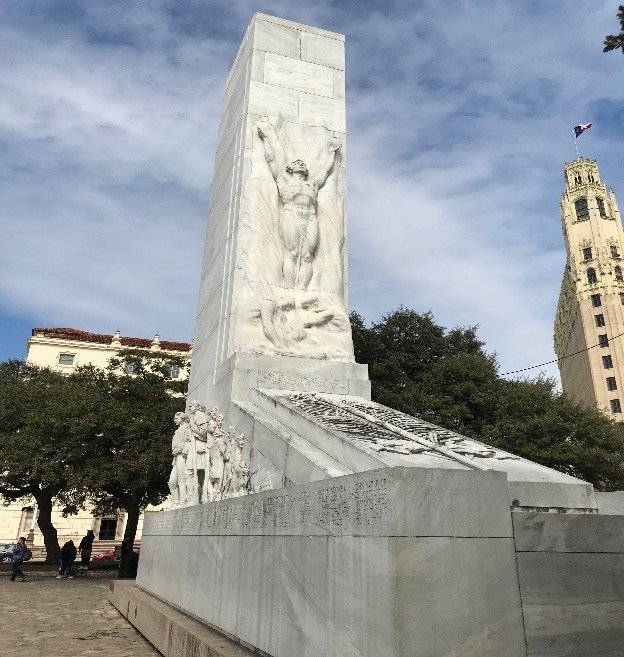 Northern main face: female figure depicting Texas with the shield of the United States and Texas under her arms. 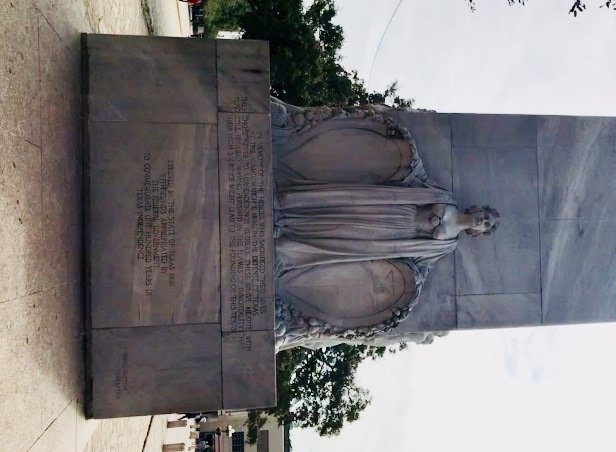 Titled “The Spirit of Sacrifice,” the Alamo Cenotaph is known as an empty tomb because it resides in the spot where the massacred defenders of the Alamo were placed and burned in mass pyres by Santa Anna’s army.1 There was a later discovery on the site, where remains from men who were believed to be Alamo soldiers were found. After this discovery, the San Antonio History Preservation Society, or SAHPS, placed the remains in a casket located inside the San Fernando Cathedral in San Antonio, Texas. With the help of SAHPS, some believed that they had given the heroes the proper burial they deserved. However, most Texans felt as if this wasn’t enough.

There had always been plans to develop an Alamo monument for the fallen, however plans always seemed to fall through. This was until 1937 when the city of San Antonio raised 100,000 dollars to fund a project to offer a memorial to the heroes of the Alamo.2 After three years of construction, 1940 marked the completion of the Cenotaph and the monument was presented to the public on the hundredth anniversary of Texas. Italian Sculptor Pompeo Coppini with the assistance of a local San Antonio architect Carlton Adams built the Cenotaph to acknowledge the soldier’s dedication and commemorate the sacrifice of war. The memorial is made from Georgia white marble and sits upon a slab of Texan pink granite. Many believe the artists used the white marble because when sculpted it “resembles ancient Greco- roman sculptures. The artists wanted to make the defenders of the Alamo resemble the great Greek and Roman warriors.”3 Additionally, Texans admired this Greco-Roman look because they felt as if the Alamo heroes deserved the same recognition and status as the famous Greek and roman gods and warriors they resembled. Dimensionally, the Cenotaph’s shaft stands proudly at sixty feet tall, forty feet long, and twelve feet wide. Circling the entire Cenotaph, are engraved names of every man who fought and gave his life at the battle of the Alamo. To this day, the descendants of the fighters’, travel great distances to see their engraved ancestors name.

The theme of the monument is “the spirit of sacrifice” 4 and is displayed on the southern main face of the monument. The following is inscribed on the southern main face: “from the fire that burned their bodies, rose the eternal spirit of sublime heroic sacrifice, which gave birth to an empire state.”5  Above the etched marble plaque, a figure is raising promptly and proudly out of flames and is raising is hands up in praise. There are two men below him who appear to be emerging from the fire. This figure is not a recognizable person but is assumed to represent Jesus on the cross. This man emerging from the flames is stretching his arms in a cross-like fashion to resemble Jesus dying for his follower’s sins. When he died, Jesus was next to two sinners on smaller crosses, this is mirrored on the Cenotaph as there are two smaller men emerging from the flames towards the bottom of the southern face. The artist mirrored Jesus’s sacrifice to the figures emerging from the flames to symbolize that like Jesus the Alamo soldiers died for the better wellbeing of their people. The northern main face presents a feminine figure thought to symbolize the state of Texas. She holds the shield of Texas and the United States.

On the east side ledge of the monument, there are decorations of eight men that are sculpted in low relief and appear to be fighting a battle. Above the fighters are two men depicted in high relief which symbolizes that these men are of a more renowned position. These celebrated men are William B. Travis and David Crockett. William B. Travis was a famous Texan war commander. In his early days he was a lawyer and soldier and at twenty-six years old , he was granted the position of lieutenant colonel for the Texas Army of independence. Travis was most well-known for his letter asking for help as the Alamo volunteers were surrounded by enemy forces. He addressed his letter to “the people of Texas and all Americans in the world” where he devised the famous phrase “victory or death”.6 Despite being outnumbered by the Mexican army, Travis never ceased to encourage, and hearten his men. He gave them hope for a better future as a lone star republic. Next to Travis sculpture stands the well-known David Crockett. Crockett was a well-known frontiersman and politician. Most importantly, he was a skilled soldier and oversaw the Tennessee volunteers who he trained and commanded in the Battle of the Alamo. Unfortunately however, like many others, Travis and Crockett died at the Battle of the Alamo and will be remembered as two of the greatest officers in Texas history.

The west side resembles the east with eight men in low relief and two brute men stand before them: James B. Bonham and William B. Bowie. Bonham was an American born citizen who played the part of a “messenger, soldier and officer at the battle of the Alamo.”7  He was great acquaintances with Sam Houston and he devoted his life to giving Texas the independence it deserves. William B. Bowie received word of Mexican troops planning to take the Alamo. Following this news, he offered to take his men to Texas as volunteers to defend the mission from the Mexican attack. Throughout the battle Bowie gained respect from soldiers because of his marriage to a wealthy Mexican woman who chose to stay loyal to Texas during the fight for independence. In addition, he was fluent in Spanish and had close ties with few Mexicans soldiers who often provided information about the plans of Santa Anna’s army. Both Bonham and Bowie died in battle and will be remembered as great Alamo war heroes and their faces will remain in stone on the cenotaph forever.

Since the 1980s there has been quite some speculation surrounding the Cenotaph. Just this past year the city was attempting to remove and relocate the cenotaph. The possibility of displacing the Cenotaph left Texans outraged. San Antonio citizens argue that the monument “sits in the correct spot. This is an empty tomb and it is commemorating the defenders. Because of this I don’t want it moved an inch”8  It has become apparent that the Alamo Cenotaph represents much more than just a monument to Texans. It represents selfless service and encourages Texans to defend what is important. Because of its significance and the display of Texas strength, the Alamo Cenotaph will always be a valued monument to Texans.