E.B. Hamrick Hall is currently located on the campus of Gardner-Webb University in Boiling Springs, North Carolina. Hamrick Hall as it is commonly known, was first built in 1925 and underwent renovations in the 1940s and in 1998. While the building has served many purposes over its almost 100 year existence, it currently houses the Godbold School of Business. In it are all of the classrooms for the School of Business as well as the offices for the faculty in the school. Additionally, Hamrick Hall is home to Blanton Auditorium, a 300 seat venue designed for various types of events including recitals, and academic lectures. 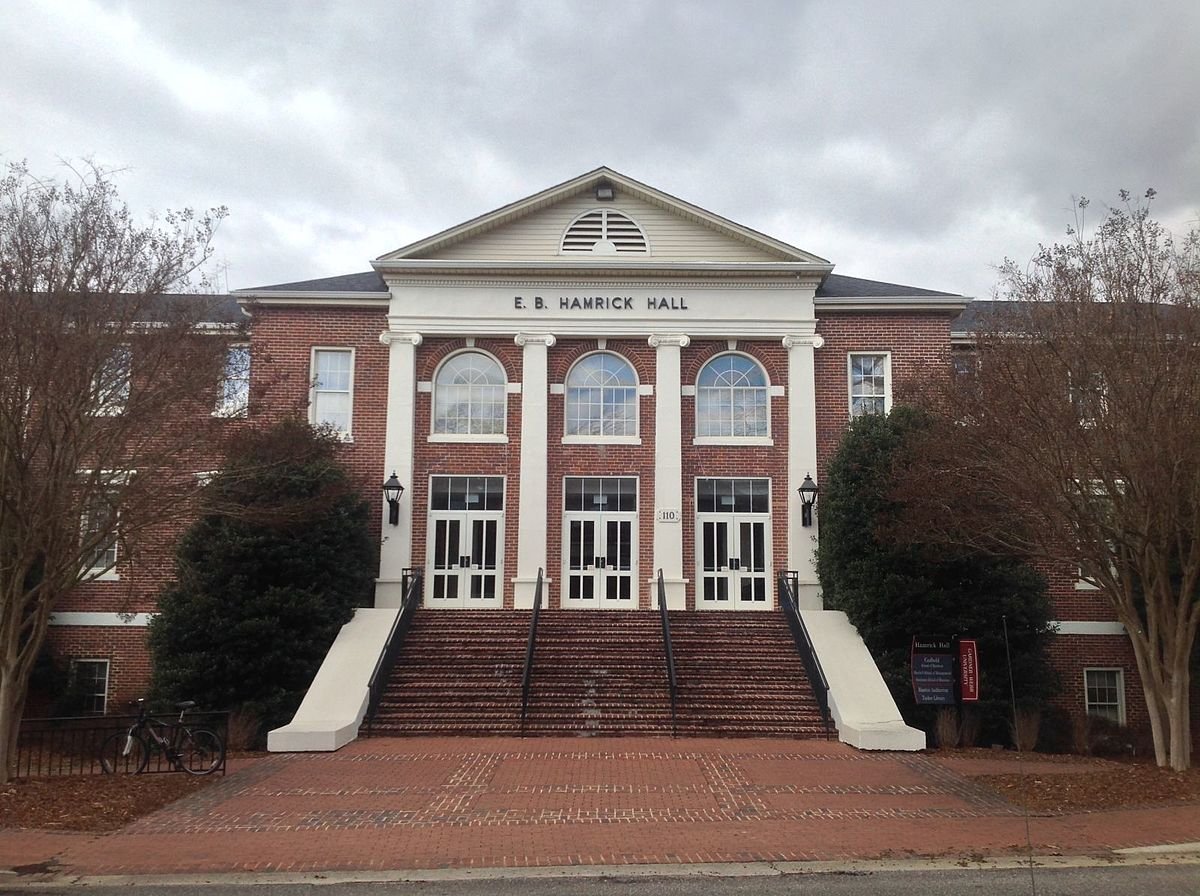 Originally named the Memorial Building, E.B. Hamrick Hall was first built in 1925 on the campus of what was then known as Boiling Springs High School.  The school transitioned to a Junior College in 1928.  In 1937 while already suffering the plagues of the Great Depression, the College took a serious blow when the Memorial Building as it was still known, burned.  Fortunately, only the inside of the building was lost and the exterior remained.

Due to financial hardships, the renovation of the building was not completed until 1943, however upon its completion, the building was renamed E.B. Hamrick Hall after Elijah Bly Hamrick.  Hamrick was a prominent businessman in the Boiling Springs community and had been a significant contributor to the school as well as serving on its board of trustees since its inception.

The building remained a central part of the campus as the College grew and prospered.  In 1942 its name was changed to Gardner-Webb College in honor of former North Carolina Governor O. Max Gardner and his wife.  Additionally, in 1948, the school became a member of the Baptist Colleges of the North Carolina Baptist State Convention.  The College’s crowning achievement came in 1971 however when it gained status as an accredited four-year college.  In 1982, Hamrick Hall gained status on the list of the National Register of Historic Places.  In 1993 the College became known as Gardner-Webb University.

The building however in 1981 suffered another fire that once again damaged the interior of the building.  The building set empty for many years until in 1998 renovations in it were completed and it reopened to the state it is in today.  The building now serves as the home to the Graduate and Undergraduate programs of the Godbold School of Business.  The building houses many multimedia classrooms for theses programs, a computer lab, as well as faculty offices.  Also found in the building is the Tucker Library, a library that houses literature specific to the Business School and also provides place for students to study.  Blanton Auditorium, a 300 seat venue designed for various types of events including recitals, and academic lectures can also be found on the main floor of the building.