This historical marker shares the history of a part of the Second Battle of Manassas or Second Bull Run. The two-day battle on August 29-30th 1862 was a battle during the Civil War between Union forces, led by General John Pope, and Confederate forces, led by General Stonewall Jackson. Brigadier General Maxcy Gregg, on August 29th, 1862, withheld six separate attacks from the Union by setting his 1,200 troops atop a rocky knoll behind a railroad grade. Although his Brigade nearly collapsed, General Gregg rallied his troops and held his defensive line for the Confederates.

By J. Makali Bruton, September 4, 2015 Depicts the marker for this site which holds information about the battle. 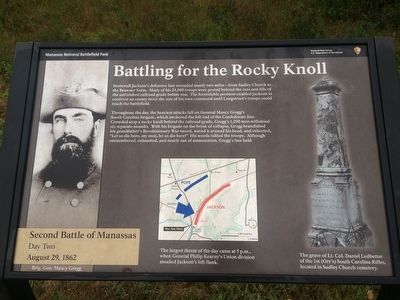 By J. Makali Bruton, September 4, 2015 The unfinsihed railroad grade can be seen roughly in the background og this image, right before the treeline. 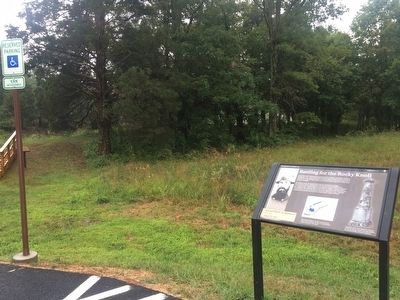 President Lincoln and Henry Halleck decided to recall the Army of the Potomac and unite it with the newly formed Army of Virginia, then under the command of General John Pope, this new army would then make a combined offensive towards Richmond. Knowing General McClellan’s army was on its way to join Pope, which would create an overwhelming numerical advantage for Union troops, Confederate General Robert E. Lee decided to attack Pope’s forces before the two could meet. General Lee decided to divide his Army of Northern between Generals Jackson and Longstreet. Although Jackson’s troops were detected by Union scouts, their movement was misjudged and within two days Jackson’s troops had struck the Federal supply base at Manassas Junction.

General Pope’s troops turned to face General Jackson but they were unable to locate his forces initially until Pope’s cavalry engaged in a small skirmish at dusk on the 28th. Pope began to prepare his army for an attack on Jackson the next morning, assuming that General Jackson would be retreating in order to join back with the rest of the Confederate army. Unbeknown to General Pope, Jackson had actually taken up defensive positions and General Longstreet was moving to join Jackson’s forces against Pope.

On the 29th, Pope found Jackson’s forces posted on an unfinished railroad grade and prepared for a defensive. Although in some places the Confederate line was broken throughout the day, Union forces were quickly pushed back again. During so, General Gregg withheld heavy attacks upon his rocky knoll and rallied his troops by brandishing his grandfather’s Revolutionary War sword and saying, "Let us die here, my men, let us die here!" John Fitz Porter defied an order from Pope in fear that General Longstreet’s troops had already arrived and that his forces would be outnumbered. This assumption has safe as Longstreet did in fact arrive by noon, unknown to Pope and overpowered the Union’s left flank. General Lee urged Longstreet to advance but General Longstreet refused and maintained defensive positioning.

On August 30th, General Pope had yet again misjudged a Confederate retreat with the adjustment of defensive positioning the previous night and urged another assault on Confederate positions. General Pope sent word to Washington of an imminent victory and of his plans to pursue the retreating Confederates prior to his troop movement. General Pope’s troops were turned back by Confederate artillery and then adjust to the right to attack Jackson’s right flank. General Longstreet took advantage of this and ordered an aggressive counterattack on the Union’s left flank. These attacks forced the Union to fall back and inevitably lead to their retreat.

Although 75,000 Union troops outnumbered 55,000 total Confederate troops, the Confederates maintained their defensive lines and pushed away Pope’s advances. Out of the 22,000 casualties of the battle, 13,000 of those belonged to Union forces.