The home of Rafael "Maestro" Cordero, also purposed as a school, is located at 315 Luna Street, San Juan Puerto Rico and was established in 1810. It is also known as "La Escuela del Maestro," which translates to the School of the Master. Now a museum, it was where young boys received an education for free. Children of all races and social classes gathered in this home to gain an education their parents couldn't afford. The once ran down home, including just a table, papers and material, and other classroom furnishings, was remodeled by the Puerto Rican Government before being made into a museum. The home was also registered as a historical site in the National Register of Historical Places of the United States.

“The School of Master Rafael Cordero” by Francisco Oller, 1890 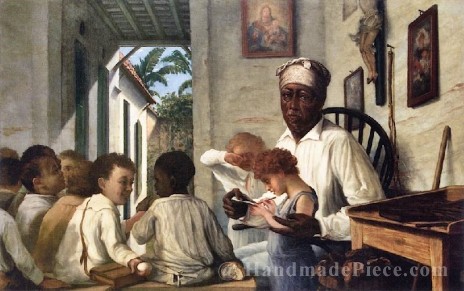 Rafael Cordero was born on October 24th, 1790 in San Juan Puerto Rico, to two free African American parents who were both Artisans. Rafael Cordero also had two sister's whose names are Gregoria and Celesina Cordero. His older sister Celesina was also a self-educator, and later followed in her brother's footsteps and began teaching as well. Unfortunately, even though his parents were free, African Americans were still unable to attend school, where at the time Blacks were not even allowed to be enrolled.

Nevertheless, Cordero took his love to read, learn, and most importantly teach to help mainly poor Black children receive an education. Rafael taught subjects covering mathematics, reading, calligraphy and religious instructions for the Christian faith. Bishop Juan Alejo de Arizmendi presented Cordero with the Sacrament of Confirmation at the age of fourteen where he dedicated his life to being Catholic, which explains why religious instruction would be a part of his teaching curriculum. As time went on, he opened his curriculum to all people of any race or economic class in 1810.

Rafael Cordero worked as a cigar maker and shoemaker to support himself and his love of teaching the children. In fact, Cordero was presented with an award some-time between 1810-1867 which granted him one hundred pesos for his outstanding job of teaching the less fortunate. He took half of this to buy clothes and books for his students rather than using it for himself. He cared for everyone regardless of their background, shown through his actions as well as the different children he taught who were white, Black, Spanish, and from different cultures and social statuses. He proved they could learn together with no problems or hatred to get in the way. In the 1800s this was a great accomplishment to have so many divergent people learning in a room together especially from a Black man.

The school on Luna Street was maintained and thrived for fifty-eight years, teaching any child who needed assistance. Rafael Cordero passed away on July 5th, 1868 in his hometown of San Juan, Puerto Rico. Also known as the "Father of Public Education" in Puerto Rico, the well respected and devoted self-educator had more than 2,000 people attend his funeral. This alone shows the magnitude of his presence and the love people from around the world had for him and his committed work. There are several schools named after Rafael Cordero to honor him, as well as poems, books, paintings, and awards given to teachers in Puerto Rico, called the National Medal of Rafael Cordero. The house is still available to visit in San Juan today, where you will find a famous painting of Cordero teaching as well as leftover materials in his home that he used to teach with.