Underneath the DeLand Museum of Art, in the heart of the historic district of Deland, the location of the first African American Sit-In in Florida resides. Although the building does not hold the Woolworths the protest took place in, the building is still in its original condition and is an important place in DeLand's, and Florida's, History. 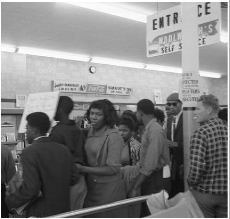 An outside view of the Woolworth’s in downtown DeLand, on the corner of W. New York Ave. & N. Woodland Blvd, 1960 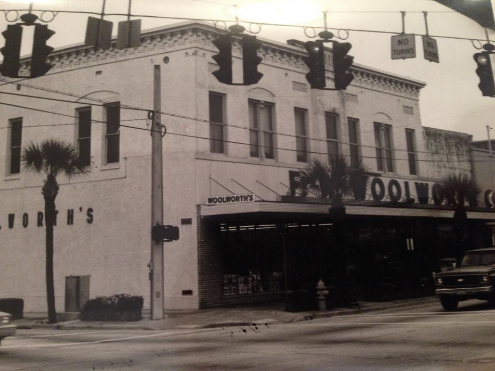 Outside view of the Museum of Art storefront; this is the business that currently occupies the old Woolworth’s 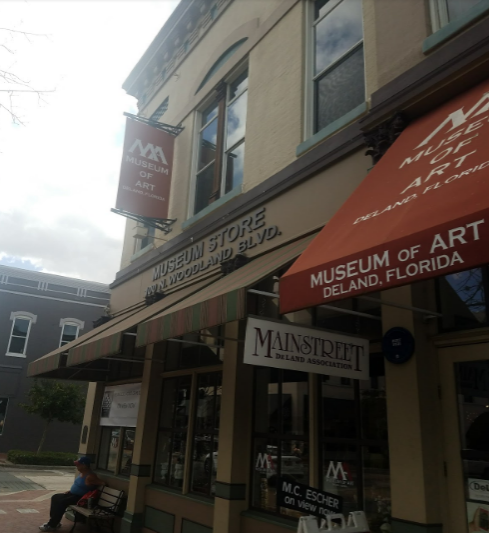 Deland in the 1960 did not have any restaurants, soda fountains or local food shops that allowed Black and white residents to sit together and eat. One of the most popular shops in Deland in 1960 was F.W. Woolworth's on Woodland Boulevard, which was and still is the main street of DeLand. Woolworth's was a lunch counter that served ice cream and daily lunch specials. It was rivaled by McCrory's the other lunch counter in town. Both, as of 1960, were designated as "White Only". Kids came here after school for their ice cream, workers would come during the day for their lunch and high school sweethearts sat together in the corner booths listening to music from the jukebox. The White and African American communities in DeLand walked the same streets and drove the same cars, but for years they were segregated and could not sit and have lunch together at places like Woolworth's. The Sit-Ins aimed to change that.
On February 12,1960 a group of high school students from Euclid High School walked into Woolworths and sat down peacefully in the designated area for whites. They peacefully sat down and filled up all 27 spots at the counter. Some students carried signs, one stating, “What will the tourists think? Why?” They called out the residents living in DeLand who wished to maintain the idyllic image of their mainstreet. The courage of these young students was the first to be seen, for this was the first sit in to occur in the state of Florida. The following day they tried again to repeat their protest in Woolworths but found that the counters were closed. The store would rather close off all business than to serve the African Americans of Deland. These young individuals chose not to go back home but to go across the street to McCrory’s to further protest the injustice of segregation. These peaceful sit ins were the work of young citizens who stood up for what they believed was right.
Today the location where the sit in occurred no longer houses a Woolworth's. Instead it houses the Deland Museum of Art. The museum is housed on the top floor, and a gift shop and offices are located on the bottom floor. With this, the story of the first African American Sit-In of Deland, and the first of Florida, has been all but forgotten. But the African American Museum of the Arts in Deland is working to make sure that story is remembered. Mary Allen, the Director of the museum is working with the community to find sources of the event, and ensure its importance is remembered in DeLand.
Joyce Cusack was one of the persons involved in the protest. Today she is the Volusia County Chairperson at Large, continuing to work for Civil Rights and Social Rights. In 2017 she, and the other members of the class of 1960 of the Euclid High School were honored by the NAACP at the West Volusia NAACP Banquet.
Hundreds of people go through the Museum of Art in DeLand, unknowingly walking into the location of a significant part of Florida’s Civil Rights movement. The African American Museum of Arts is seeking to bring light to this fact, and educate the public on the vital importance of the location in Florida’s history.