This small monument and plaque depicts the beloved cartoon character Beetle Bailey, a creation of 1948 Missouri University graduate Mort Walker. The small monument was created by Walker with his son Neal and donated to the university with the help of alumni and donors. The monument was dedicated in 1992 and depicts Bailey, a fictional army private who was also a student at the University of Missouri like his creator, lounging in a popular student hangout known as The Shack. The Shack remains a popular place in the memory of many MU alumni although it was destroyed by fire on Halloween 1988.

This small monument was dedicated in 1992, and visitors are welcome to sit and have a drink with Beetle Bailey. 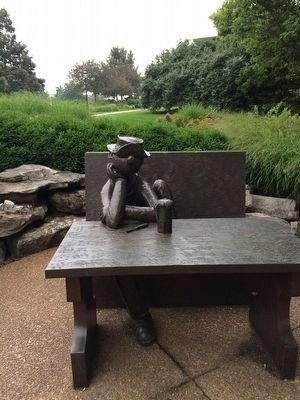 Erected in 1992, this small monument and plaque was created by the author of the popular newspaper comic, Beetle Bailey. The comic centered on the antics of Beetle Bailey, a laid back soldier in a fictional army post that began in 1950. Walker first started drawing Beetle Bailey during his years at the University.

The marker has the character Beetle Bailey resting on a bench and his elbow propped up against the table. Visitors of Missouri and students of the University of Missouri can sit down and have their pictures taken next to the character. Mort designed and produced the statue out of bronze with his son Neal Walker as a gift to the University of Missouri in 1992. Names are carved onto the bench and table of the table of those who financed the statue ranging from Mort himself, the King Features Syndicate, and alumni.

The table and bench the statue of Beetle Bailey is relaxing on is based on a place on the campus called The Shack that Mort used to come to and relax in back in his college years. The statue is currently located the site next where The Shack used to be until it was burned down in 1988 during Halloween.