Pertle Springs was once one of the most luxurious resorts in the Midwest. This small mineral spring became the corner stone to a bustling area of relaxation, learning, rejuvenation, and adventure that infused the local economy of Warrensburg for nearly 25 years. Its impressive grounds provided activities of all kinds until the call of nature was silenced under the newly developed urban amusement parks that were to take the place of natural resorts. Pertle Springs then became the home of the Civilian Conservation Corps, which in its own way helped the local economy when it was desperately needed during the Great Depression and amidst the Dust Bowl. Pertle Springs would be the economic boost Warrensburg urgently needed between the Civil War and World War II to keep the town on the path of prosperity. 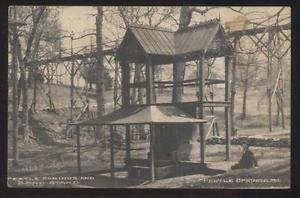 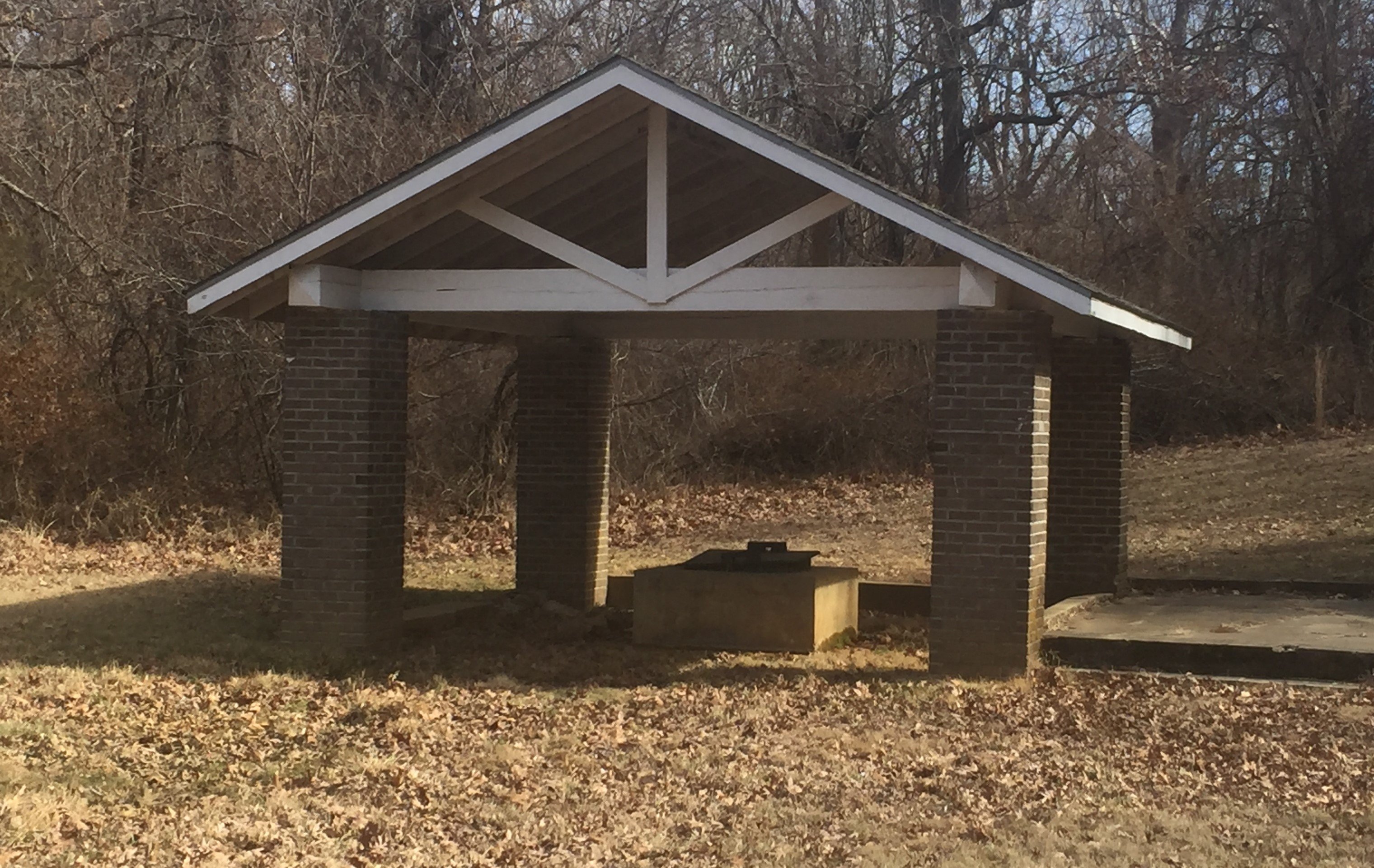 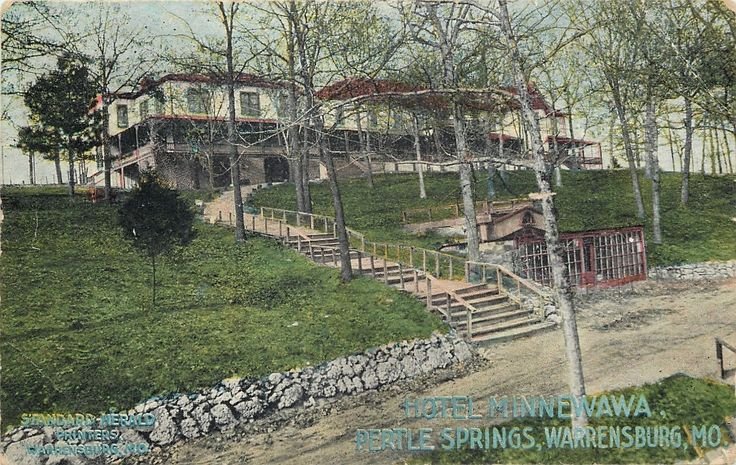 One of the two CCC chimneys in the woods at Pertle Springs. Photo by Mary Frintz 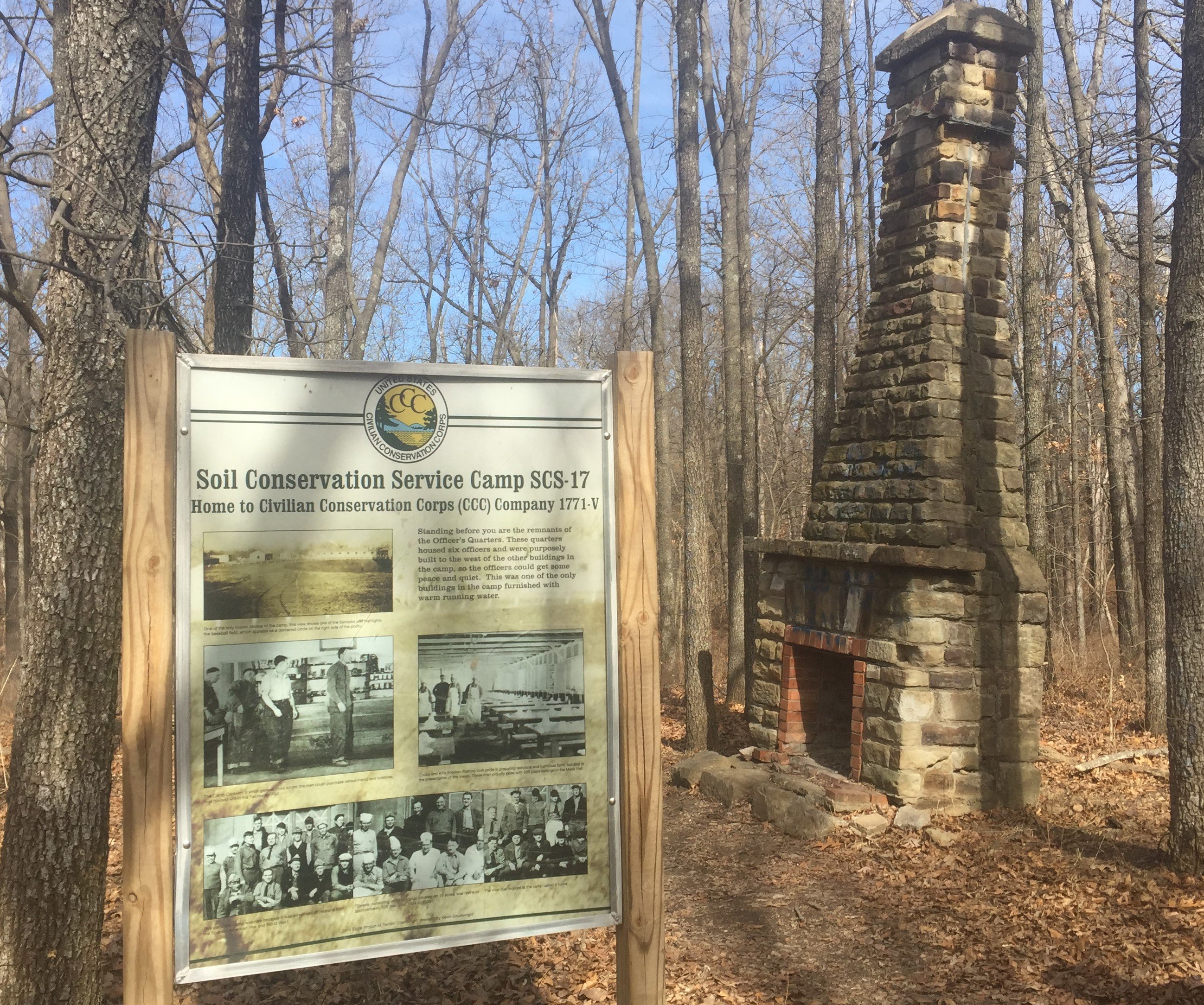 Pertle Springs Park was a popular participant in the recreation and leisure trend of the late nineteenth century. It operated as a mineral spring resort from the 1880s to the 1920s. In its prime, Pertle Springs boasted a bandstand adorning the spring structure, a fountain, a huge open air auditorium, numerous cottages and meetings halls, an elaborate gazebo, a greenhouse, a zoo, a bowling alley, and a colossal 150 room hotel sitting amidst 300 acres of paths, trails, and recreational opportunities on or beside the lakes. There was even a bear living in an atrium that had an artificial cave in which to hibernate in the winter. Sadly, virtually nothing of this enchanting play land remains with a small exception. An unassuming small structure now houses the spring that was once the center of this recreational dynasty of health and leisure. The site is fondly remembered, however, in the numerous photographs, post cards, event programs, and promotional materials produced while it was still in existence. The Warrensburg community also commemorates the site’s importance with occasional newspaper articles, archaeological studies by the University of Central Missouri who presently owns the land, and murals. One large mural in particular located in downtown Warrensburg at East Market and Holden Streets spans the sides of two buildings.

In 1878, A. F. Zimmerman purchased the spring and the 280 acres of land surrounding it from William Purtle, who had made little to no improvements upon it. Zimmerman is believed to have made a few structural improvements on the land, but his focus was selling the mineral water to Warrensburg residents until he sold the land to James H. Christopher in 1884. Christopher changed the name from Purtle Springs to Pertle Springs, thinking the vowel change made the name more marketable and pleasing in print. Exactly when Christopher created and opened his resort is murky in the historical record, but documents indicate development had begun by November of 1885. What is known is he was given an immense amount of community support from local publishers, gaining a great amount of positive publicity from early development up to its closure.

When finally up and running, Pertle Springs became the first Chautauqua gathering location in the state of Missouri. With several other mineral spring resorts already in operation, having this distinction was quite impressive. Chautauqua was a large adult education movement presented in a religious context but with a focus on lectures rather than sermons. The Chautauqua program expanded into the nationally recognized Chautauqua Literary and Scientific Circle, and the local 4 year program’s graduates could attend the annual recognition ceremony held at Pertle Springs. While officially Pertle Springs was nondenominational, the CLSC was definitely instrumental in early interest in the resort.

Over the years, Christopher demonstrated through alterations to the area great ingenuity and creativity. By 1886, he had added at least 4 manufactured lakes and introduced new plants, animals, birds, and fish into the area. He was a marketing genius, and promoted Pertle Springs as a self-improvement opportunity rather than just reckless enjoyment. It was a retreat not for sinful idleness but rather a place to utilize nature’s gifts for better physical health and spiritual rejuvenation. This advertising complemented the national narrative, and the attendance skyrocketed with the addition of the Missouri Pacific Railroad adding easier accessibility with the Dummy Line train extension.

Alas, all good things must come to an end, and so it was with Pertle Springs. Interest began to wane as World War I began. The elaborate and ornate structures Christopher had erected so quickly turned out to be made of rather cheap materials, and buildings slowly began to grow plainer and plainer with each dated postcard, their grandeur slowly breaking off and eroding away.  The punctuation of the resort’s decline was in April 1926 when the hotel burned to the ground. By that time, it was a vacant building. The trend shift from rest and relaxation to more action-filled entertainment was all but completed, and the hotel was never rebuilt.

Skipping ahead to October of 1934, 200 men, many older veterans, moved into their new barracks on that land known as Pertle Springs. This unit of the 1771-V Civilian Conservation Corps (CCC) was tasked with studying soil profiles and erosion under Franklin Delano Roosevelt’s New Deal plan for soil conservation after the Dust Bowl. They would be there 5 years in the camp consisting of barracks, a latrine, a bathhouse, a mess hall, storage sheds, a machine shop, a classroom, a recreation hall, officer’s quarters, a baseball field, and a waste water cistern. Not quite Pertle Springs at its glory, but a substantial arrangement. The UCM archaeological field school has been excavating over 100 acres of the camp since 2001. As with the Pertle Springs resort, the CCC camp has left very little behind. A few notable exceptions are some cement foundations and two brick chimneys standing solidary with no structures around them off a trail that begins beside the spring. The remnants do not portray the magnitude of the camp that records and archaeology of the area have authenticated. The men purchased their foodstuffs and many supplies from local merchants, allowing the inhabitants of Pertle Springs to again assist the economy in a time that income was desperately needed. This was not the only economic benefit. Some of the men’s families that were not local would move to Warrensburg, renting and spending money for entertainment and other shopping. Another added benefit of their presence was the knowledge they shared with local farmers about soil erosion prevention. As these men bettered themselves, they were able to benefit the community of Warrensburg with their both discoveries and financial infusion.

Both the Pertle Springs resort and the CCC camp greatly boosted the economy of Warrensburg during difficult times in the nation’s history. If not for the presence of both on these 300 acres, who knows what would have happened to the city of Warrensburg. Sadly, only traces of these historic places are left, but their impact is felt in Warrensburg to this day.

Pertle Springs presents a well-documented historical demonstration of the increased importance of recreation in the process of social progression. Initially the type of location utilized only by the wealthy in pre-Civil War times, Pertle Springs became the success it was greatly due to community support and Christopher’s ability to attract people from all social classes. Even the African American community came to reenergize themselves at the resort from its opening on, although their enjoyment was limited to segregated areas. This social and racial significance is important, but perhaps what is even more important was the money that was brought into the community by the presence of the resort. The economic opportunities given to Warrensburg due to the popularity of Pertle Springs gave the town a much needed financial boost in the times between Reconstruction and World War I. The residents of Warrensburg enjoyed the resort itself as well as the enhancement to the economy that tourism provided. The men of the CCC camped at Pertle Springs not long after its closure and continued to boost the economy of the community with their presence.