Pittsburgh’s West End Bridge has connected the city’s Chateau neighborhood of its North Side with its West End since 1932. The “first bridge” on the Ohio River, it is located about a mile from Pittsburgh’s Point, where the Monongahela and Allegheny Rivers converge to form the Ohio. Its main 778-foot span is suspended from steel wire-ropes that hang from a massive bowstring through-arch. At both its southern and northern approaches, pony or Warren trusses usher vehicles to the main span making the entire bridge over 1,200 feet in length. The West End Bridge, like many of Pittsburgh’s bridges, is listed on the National Register of Historic Places, an honor it achieved in 1979.

The West End Bridge with downtown Pittsburgh in the background. 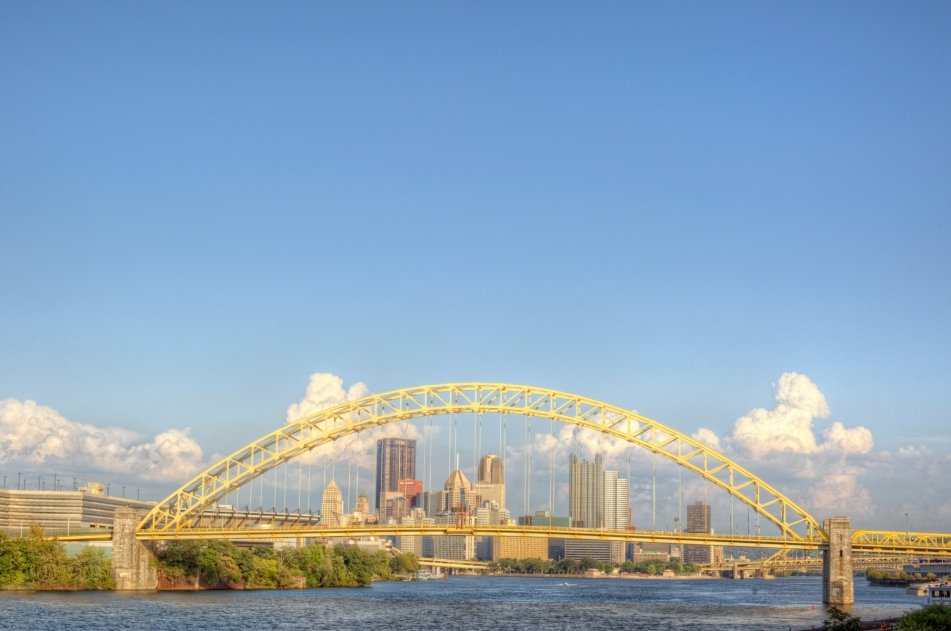 The West End Bridge as seen from Mt. Washington with the Rivers Casino, Carnegie Science Center and Heinz Field in the background. 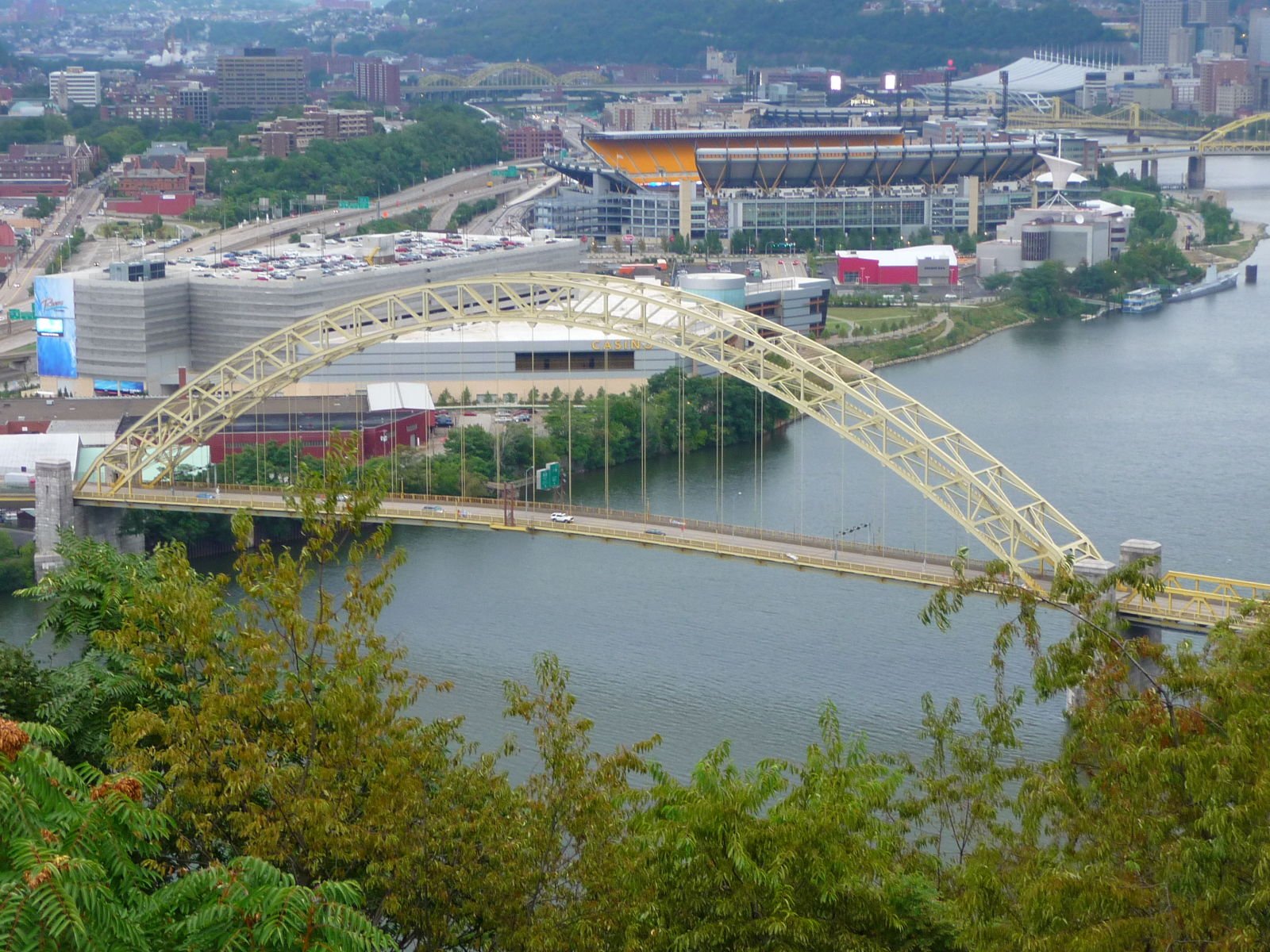 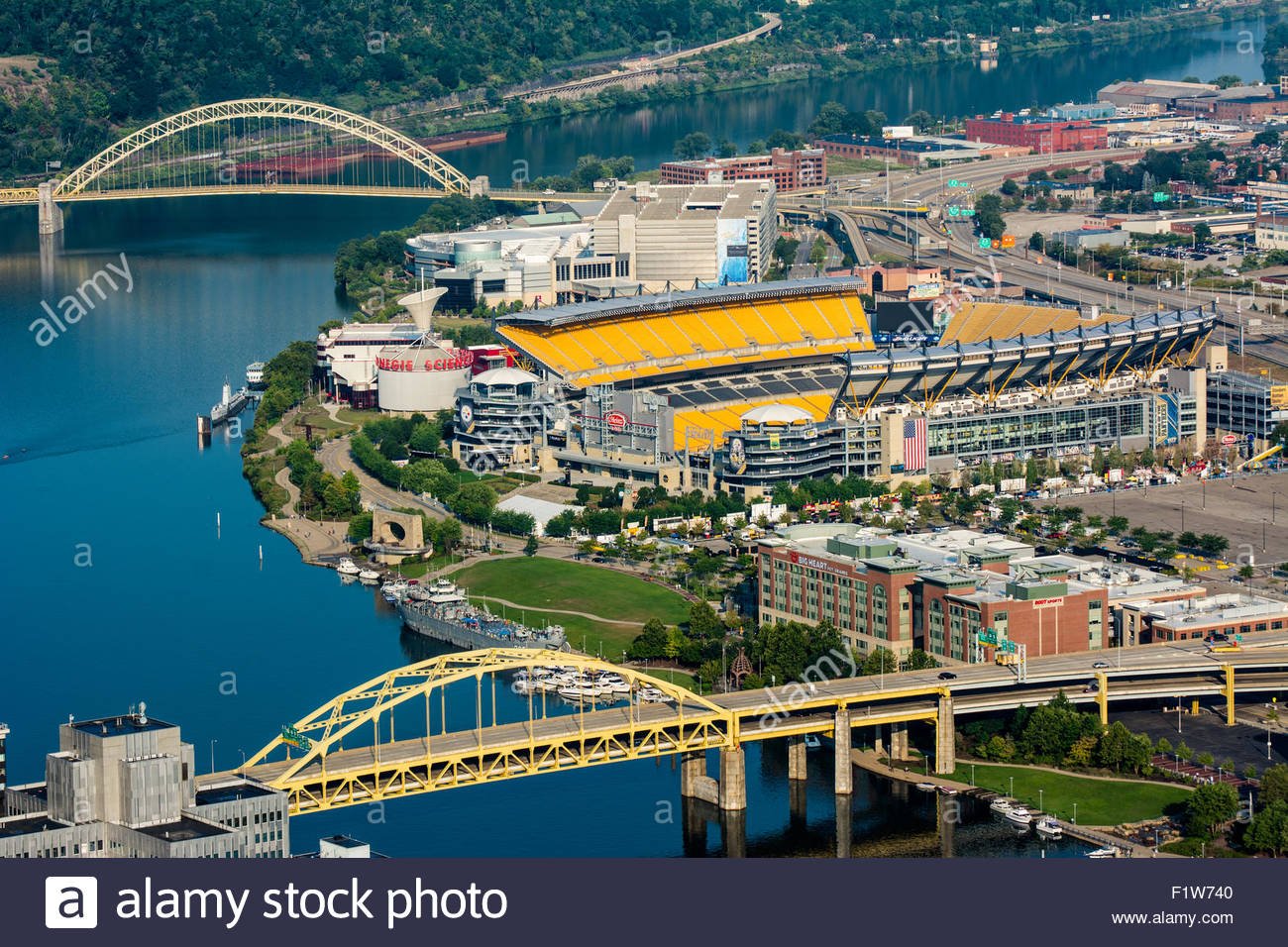 An aerial view of the bridge looking northwest and downriver from Pittsburgh. 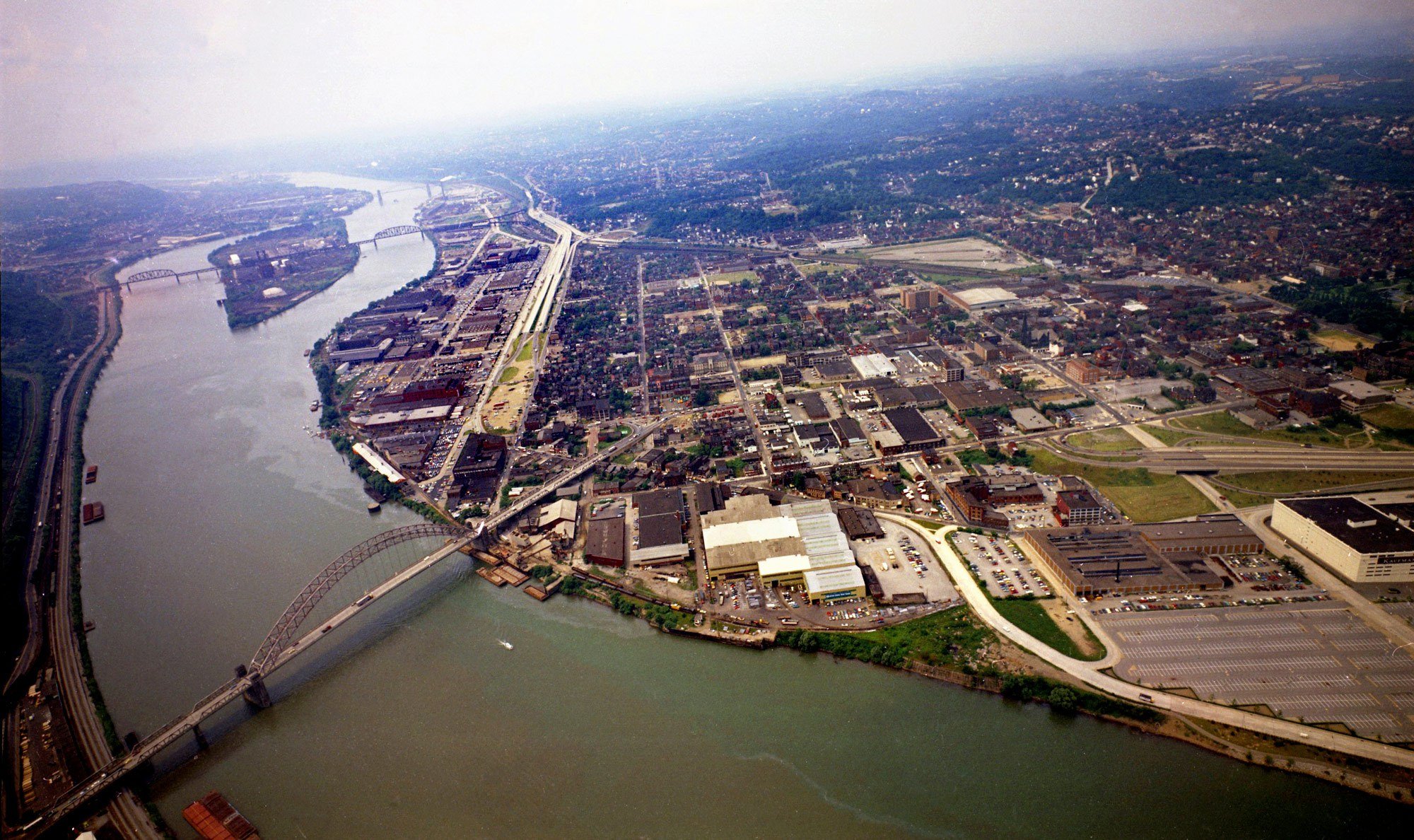 The desire to connect Pittsburgh’s northern suburbs with its West End and southern suburbs, via a bridge across the Ohio River, was first discussed well before the onset of the Great Depression in 1912.  Up until the bridge’s completion, only a ferry served as a connector.  The efforts were led by Henry Tranter, who owned Tranter Manufacturing, a local machine shop.  Tranter served on the Chamber of Commerce’s Bridges and Highways Committee from 1915 until 1935.  After World War I, the city embarked on numerous large-scale infrastructure and transportation projects that included both the Ohio and Allegheny River Boulevards, the Liberty Tunnel and Bridge, the McKees Rocks Bridge, and various locks and dams to increase the depth of its shallow three rivers.  The design and construction of the West End Bridge would be added to that list.

The Allegheny County Commissioners approved its construction in 1929 and George S. Richardson’s design was approved in September of 1930.  Richardson, who worked for the Allegheny Department of Public Works and also designed the city’s Fort Pitt and Fort Duquesne Bridges in the 1950s, developed a tied-arch design rarely used on a bridge of such length.  In fact, the only other such tied-arch design in America exists in the Tacony-Palmyra Bridge that spans the Delaware River in eastern Pennsylvania.

The city contracted with the American Bridge Company to build its superstructure while the Foundation Company of New York built its substructure, to include two large concrete and granite piers near the north and south shores of the Ohio.  Construction took just over two years, at a cost of $3.6 million, and was completed in late 1932.  Its grand opening was heralded by a celbratory gala at the city’s Fort Pitt Hotel and was attended by local and state governmental and business leaders.  The next day, December 2, 1932, Henry Tranter’s granddaughter, Mary Hershberger, cut the ribbon officially opening the bridge.

The bridge has remained largely intact at its current location since that day, with renovations of varying degrees occurring in 1948, 1955, 1958, 1977, 1980, 1991, 2002, and 2017.  Its approaches have been altered numerous times over the years, especially on the south shore of the Ohio where its infamous West End Circle was removed early in the 21st century.  Currently, its main northern approaches are Route 65 and Western Avenue while its southern ones are largely comprised of Route 51 and Saw Mill Run Boulevards.  The West End Bridge still offers one of the most unique views of downtown Pittsburgh, looking straight onto the Point of its Golden Triangle.