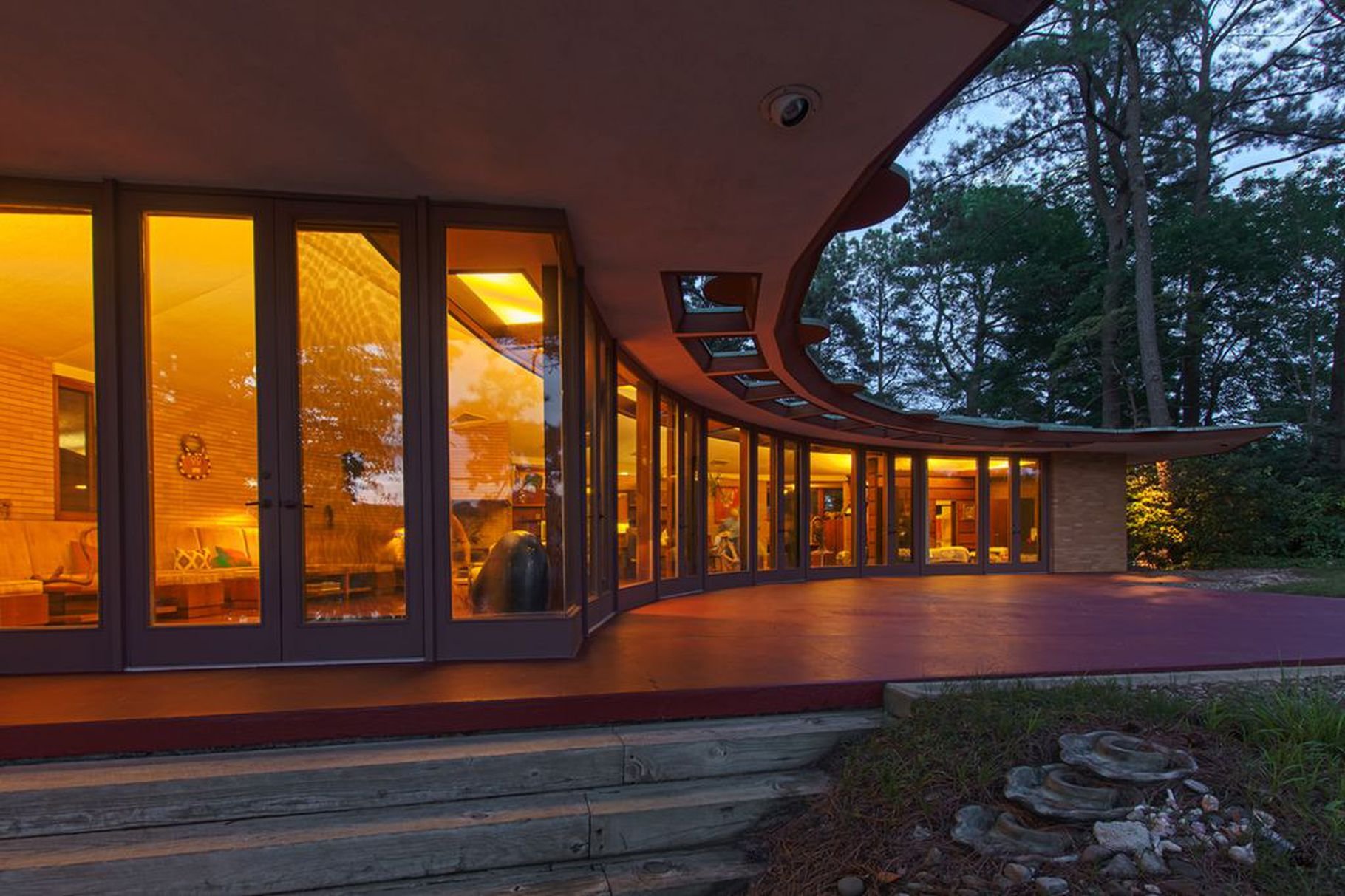 The inside of the curved great room. 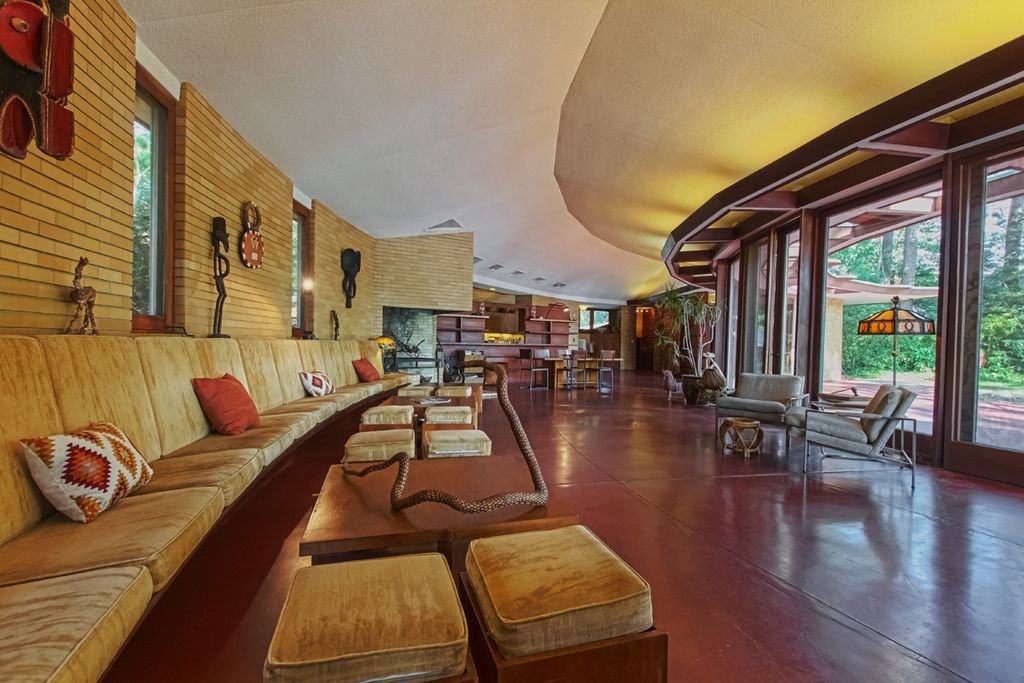 One of the rooms facing Crystal Lake. 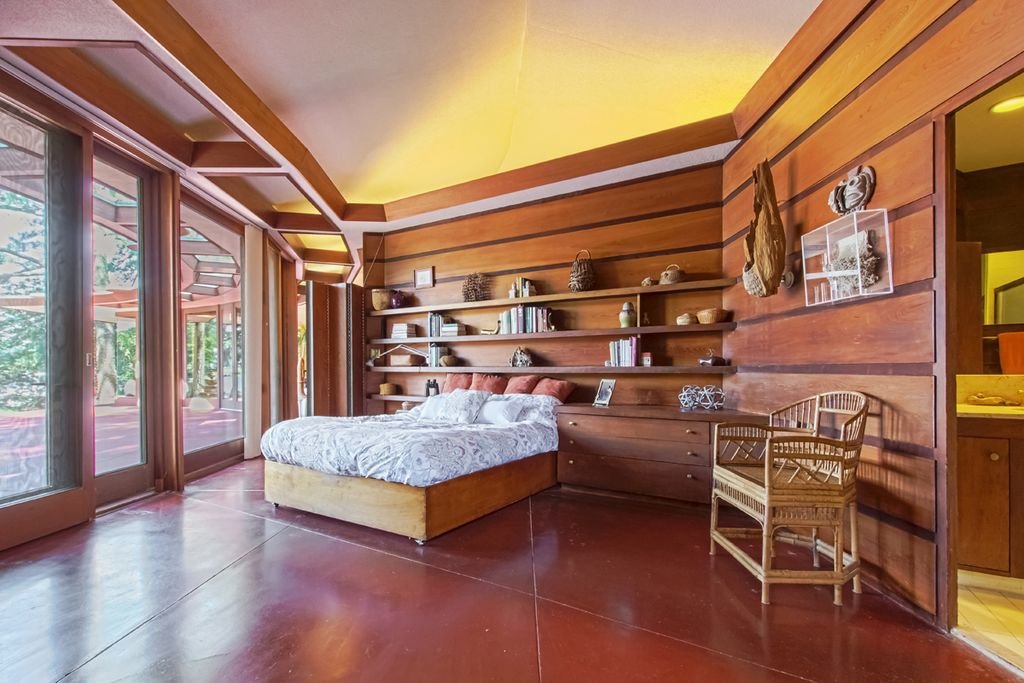 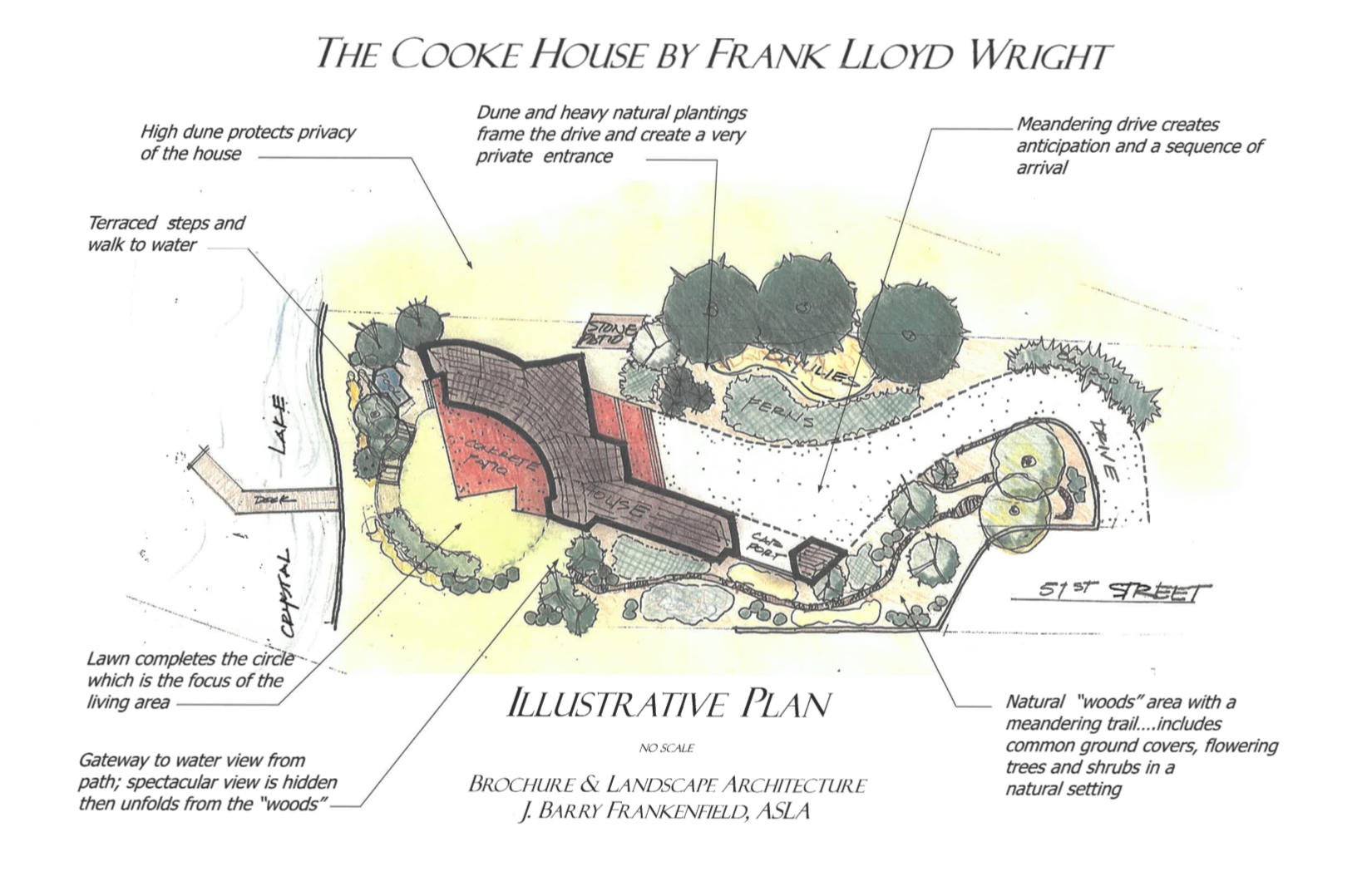 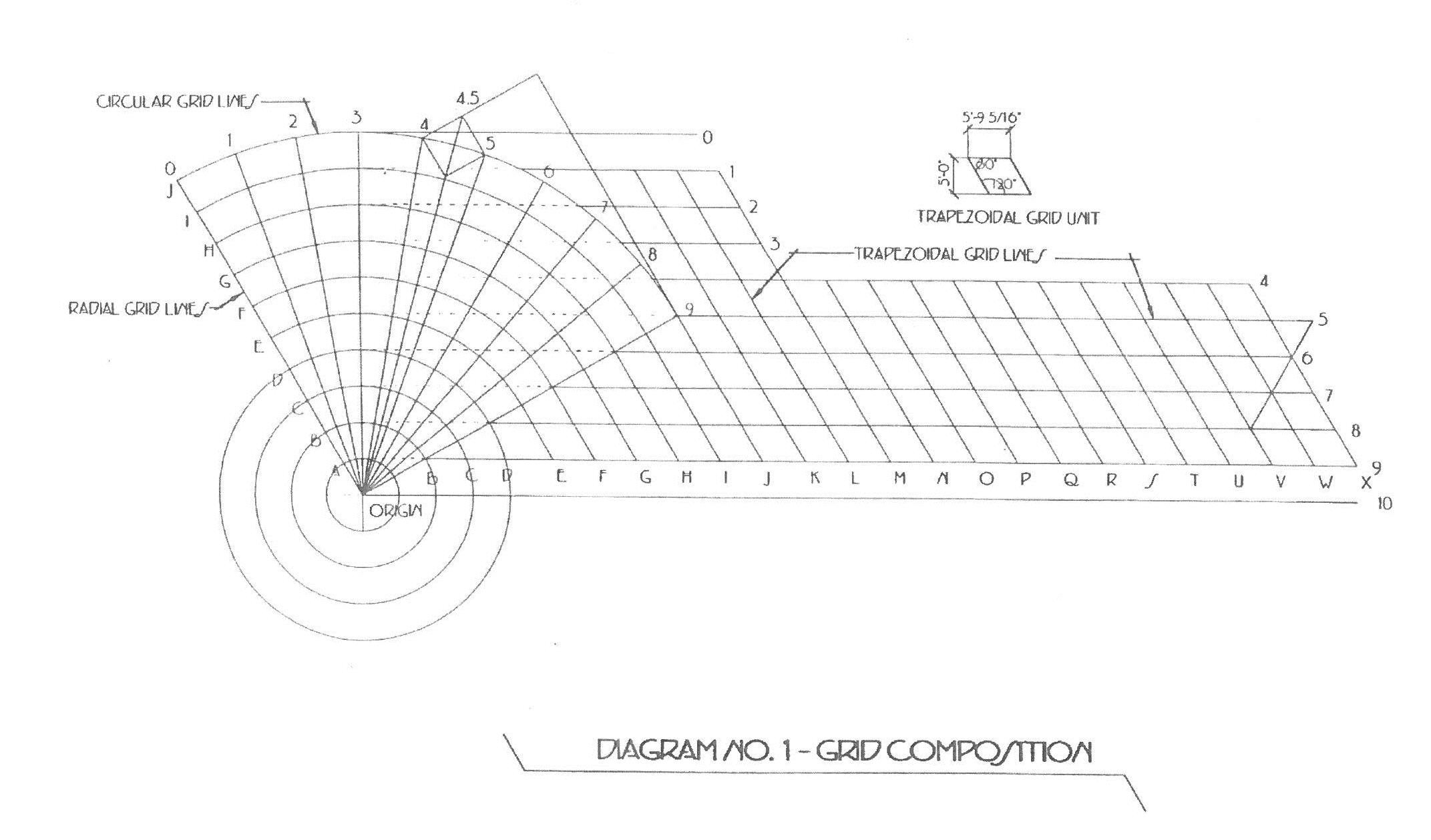 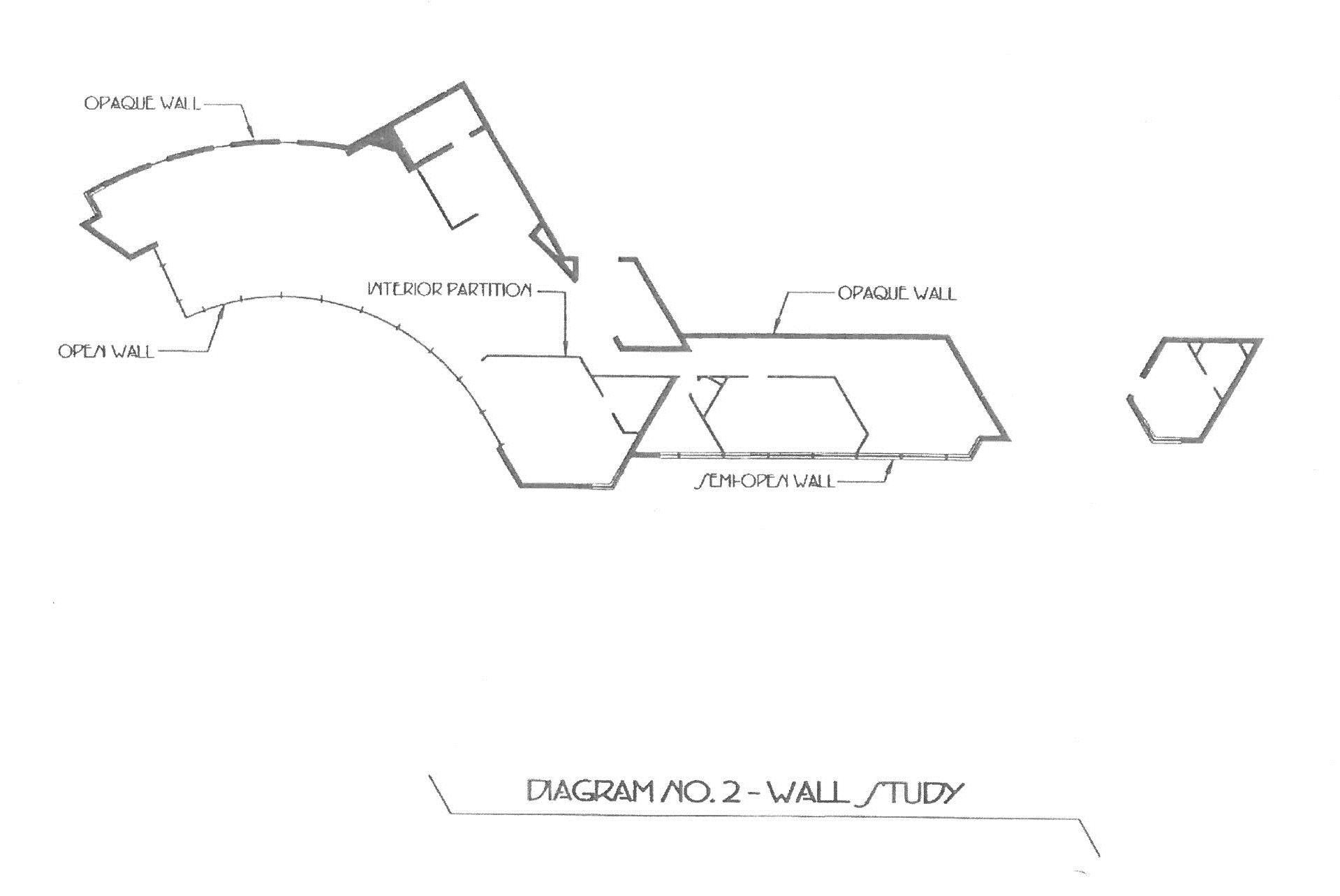 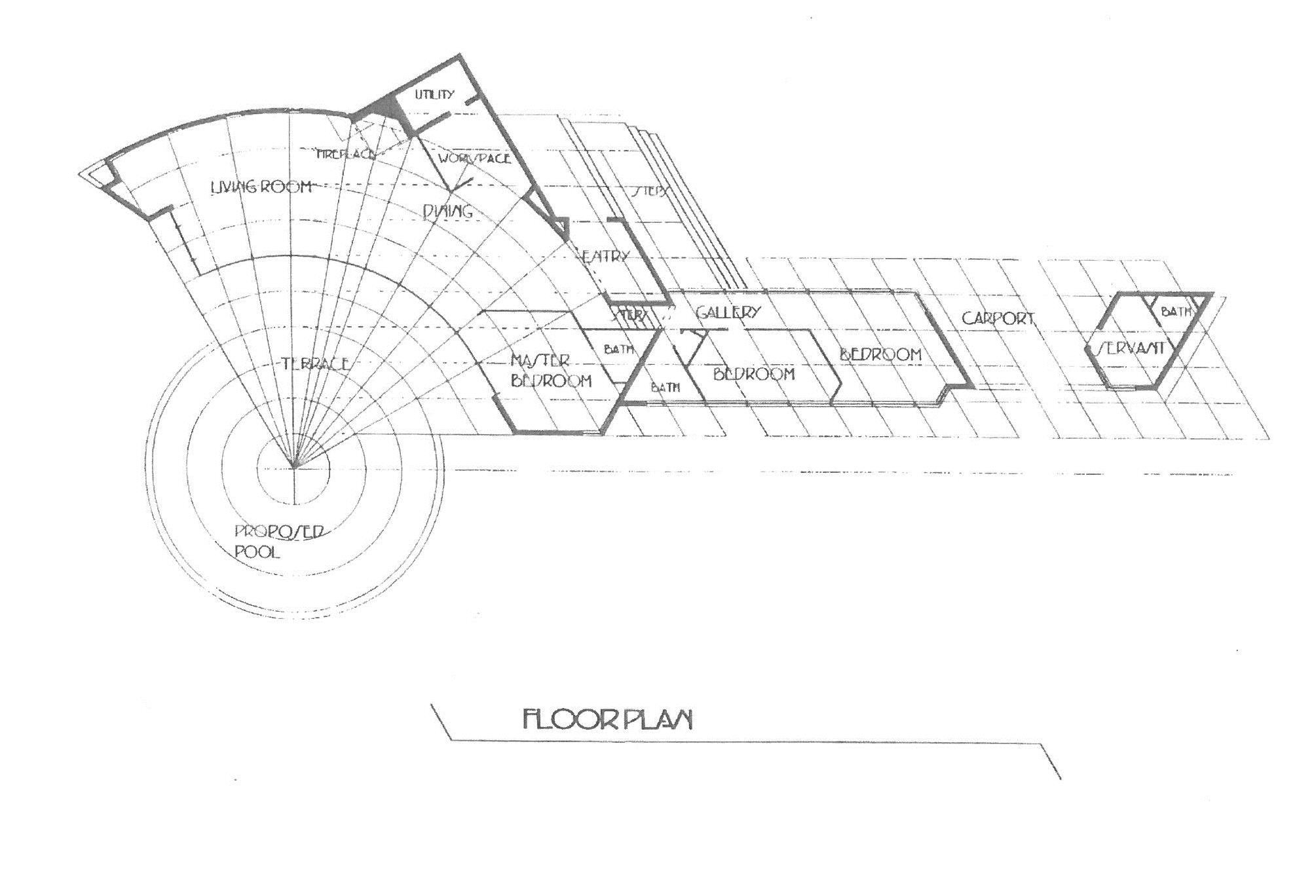 Created in Wright's Hemicycle Period, the Cooke House features a semi-circular layout, yellow-gold brick, and a copper cantilevered roof. The walls of glass and the vaulted ceilings maximize the view looking out onto Crystal Lake. The design features of the house blend seamlessly with the surrounding nature, such as the custom made gold colored bricks and the red concrete floor. When ownership changed, the house underwent light renovations. The Cooke House is now considered a green home. The improvements won an award from the American Institute of Architects.

Achieving a simple harmony with its site, the design is a complex orchestration of form, each element given its position, orientation and purpose within the fabric of an omnipresent grid. Deriving its orientation from the lakefront site, the grid is a classic example of Wright's non-orthagonal methodology of generating a flowing form that allows the inside to flow effortlessly to the outside (see Diagram No. 1.) Meshing a radial grid with a 60/120 degree trapezoidal grid, a hierarchy of spatial relationship is created, with the main living area being ordered by the radial grid, the bedroom wing, carport and servant's quarters composed within the trapezoidal area and the master suite transitioning between the two. Beginning with an origin near the lake, the radial grid is composed of ten major lines at ten degree intervals creating the ninety degree arc of the Living Room and circular lines at five foot intervals providing the nexus. The radial lines are numbered 0 through 9 and the circular lines are lettered A through J.

The walls, doors, windows, mullions and features are placed according to these grids. In some instances half-grid lines are used to achieve the room sizes Wright desired. The Terrace lies within all of the radial lines from the origin to circular F, where the arc of glass lightly separates it from the Living Room. The Living Room is contained by the curved brick wall along circular J. Bisecting the great arc is a radial line (4.5) that generates the fireplace. A perfect square diagonally placed between radial lines 4 and 5, the huge open hearth provides a visual rather than physical· separation between the Living Room and Dining Area with adjacent Workspace.

Wright was famous for emphasizing the horizontal lines of his residences, which he felt tied them to the earth. This feature is instrumental in achieving the desired harmony with the site and the Cooke Residence is an example Of this philosophy. The most obvious manifestation is the long low-pitched hip roof with its generous overhang and continuous fascia band. The copper roofing is also designed to accentuate this character, the seams being fastened on horizontal battens. The specially made bricks were not only ordered for their unique color to blend with the indigenous palette, but were sized to create a small vertical joint. By flushing the vertical mortar joints and raking the horizontal joints, the bricks become another element of long horizontal lines.

Maude and Andrew Cooke, the first owners of the home, sent their first letter to Wright asking for him to design their house in 1951. After several years of correspondence, construction began in 1959 two days before Wright died. The Cooke family, which included Maude, Andrew, and their three children moved into their new home in January 1960. Construction cost three times the Cooke's original $40,000 budget.
In 1983 Daniel and Jame Duhl purchased the house from the Cooke family. The Duhl's diligently restored the house to its former glory and updated it with central air conditioning.

Masterson, Patrick, et al., "The Cooke Residence." an unpublished booklet created for a tour of the Cooke house by the American Institute of Architects, October 3, 1999.