Founded in 1950, this museum started in three classrooms at the University of Miami. Since then it has amassed over 19,000 pieces of art and moved into its own 36,000-square-foot gallery, serving both the university and the general public. Lowe dedicates itself to education - students and faculty have annual exhibitions and tours engage visitors with questions and open dialogue. But this is more than just a student gallery. Five thousand years of art adorn the halls from the museum's permanent collection, which boasts Greco-Roman marble statues and painted pottery, Mayan and Incan carvings, Baroque and Renaissance oil paintings, African textiles and an expansive Asian art collection. There is also a smaller modern and contemporary collection, including work from American pop artist Roy Lichtenstein and printmaker Frank Stella.

Entrance to the Lowe. 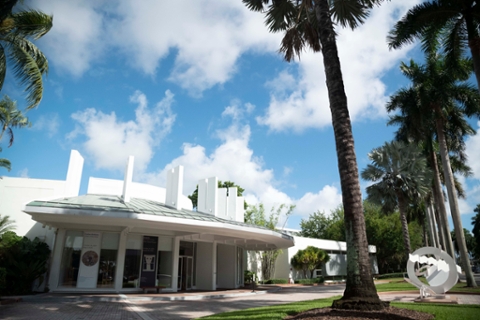 A group of students learn about objects in the museum.

Interior of the 2008 Myrna and Sheldon Palley Pavilion for Contemporary Glass and Studio Arts.

Joel Perlman's "Island Star," one of many public sculptures the Lowe maintains. 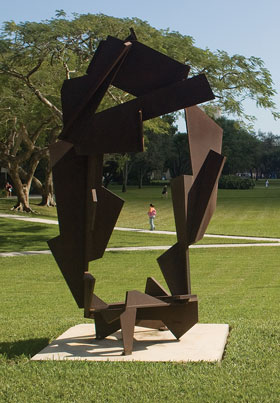 In 1950, the University of Miami created Miami’s first professional art exhibition space called “University of Miami Art Gallery.” Occupying just three cramped classrooms on the university campus, the gallery was the precursor to the Lowe Art Museum. The University of Miami Art Gallery was a smashing success. A year after opening, Joe and Emily Lowe funded construction of a new independent space for the gallery on the campus. The organization was renamed to “Lowe Art Gallery” and officially opened in 1952. Four years later, Alfred I. Barton, a collector of Native American art, donated his collection to the Lowe, establishing a central component of the museum’s permanent collection. A 1,300 square foot addition was added to the museum building to accommodate this donation.

Throughout the middle of the twentieth century, the Lowe Art Gallery continued to acquire new items. In 1961, the Samuel H. Kress Collection of European Renaissance and Baroque art donated forty-three works. These works, like the Barton collection, were also given their own wing. Later donations by Robert M. Bischoff helped establish an Ancient American collection while Stephen Junkunc was instrumental for the Asian collection. In response to the growing permanent collection at the Lowe Art Gallery, it was renamed to “Lowe Art Museum” in 1968. In 1972, the Lowe became the first museum in Miami-Dade County to be accredited by the American Alliance of Museum. It was also the first museum in the county to be honored by the State of Florida as a Major Cultural Institution, which occurred in 1985.

By 1991, the Lowe had grown so much that continuing to append additions was no longer a feasible strategy. Charles Harrison Pawley, a Miami architect, was contracted to design a new central museum space. Completed in 1996, the new structures added 13,000 square feet of space and brought the total floorspace to over 36,000 square feet. In 2008, the most recent addition to the Lowe was completed; the 4,500 square foot Myrna and Sheldon Palley Pavilion for Contemporary Glass and Studio Arts.

The Lowe’s permanent collection of over 19,250 objects includes works of art and culturally significant ethnographic material from every inhabited continent and spanning over 5,000 years. The Lowe is partitioned into eleven collection departments; Africa, Ancient Americas, Ancient Mediterannean, Asia, Caribbean, Central and South America, Egypt and the Near East, Europe, Native Americas, North America, and Pacific Islands. Each department is given exhibition space. Significant works by Lucas Cranach the Elder, El Greco, Thomas Gainsborough, Paul Gaugain, Claude Monet, and Roy Lichtenstein are just a few of the prominent artists represented in the museum. There are additional exhibition spaces for temporary, travelling, and visiting exhibitions. Furthermore, the Lowe also maintains a variety of outdoor public sculptures scattered across University of Miami’s campus. Beyond art viewing opportunities, the museum hosts several lecture series, professional development workshops, and educational programming for learners of all ages and backgrounds.