The Smoky Hill Museum is a regional history museum in the heart of downtown Salina, located in the former downtown post office. The museum is operated by the Saline County Historical Society, which was created just two decades after the city's founding in 1858. The museum has much to offer between its galleries and exhibits that preserve and share the story of central Kansas. The galleries are free and open to the public.

The museum opened to the public at this location in 1986 within the former downtown post office. 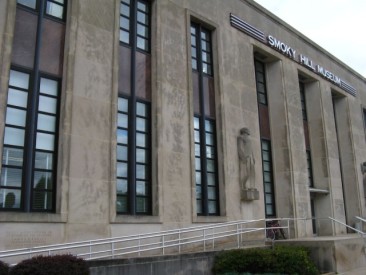 This building itself was built in 1938 and originally served as a U.S. post office and federal building. It is listed on the National Register of Historic Places for the two statues situated on each side of the front entrance. Together, they are called "Land and Communication." Land is a depiction of a strong-looking man looking west who represents agriculture and Communication depicts a woman and child looking east who represent the relationship of the family and community to federal service. Artist Carl Mose created the sculptures.