Constructed in the early 20th century, this striking red tile grain elevator was added to the National Register of Historic Places in 1983. It represents a transitional phase in the construction of Oklahoma's grain elevators, previously built from wood and eventually from concrete. Clay tiles led to greater structural integrity and lower risk of fire than wood. The Ingersoll Tile Elevator is one of very few tile grain elevators to survive today. Oklahoma's grain elevators were essential to wheat farming in the region. They were built in agricultural towns, close to the railway line, so that wheat could easily be transported to markets. 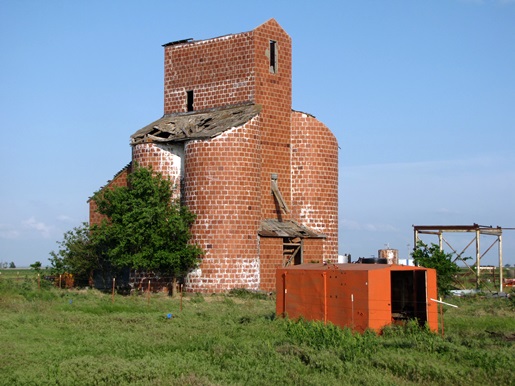 Clay tile elevators are significant because they show the architectural transition of building techniques from wood to concrete structures related to agriculture as well as the permanence and importance of the wheat industry in the commercial development of small rural northwest Oklahoma communities in conjunction with the arrival of railroads in the region. These buildings are unique in their use of hollow red clay tile in that it makes a more durable building material and provides a less combustible storage area than the earlier technique of using wooden structures and this indicates a developing engineering technology that would eventually evolve into large concrete elevators (p. 3).

Structures such as the Ingersoll Tile Elevator were constructed during the 1910s and 20s, early in Oklahoma's history as a state and before the Great Depression. Wheat was a significant product of the region. A number of Oklahoma towns grew as demand for wheat shot up during WWI and its aftermath.