Lucretia Mott was a Quaker and strong abolitionist who lived in the La Mott village, giving the community its name. 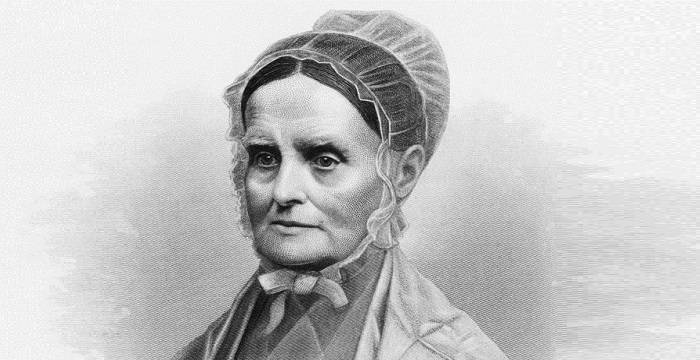 "Roadside," the home of Lucretia Mott, was used by runaway slaves as part of the Ungerground Railroad. 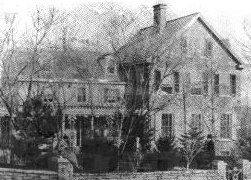 Lucretia Mott's home was destroyed in 1911, but this landmark made possible by the Pennsylvania Historical and Museum Commission serves as a reminder of her work and influence. 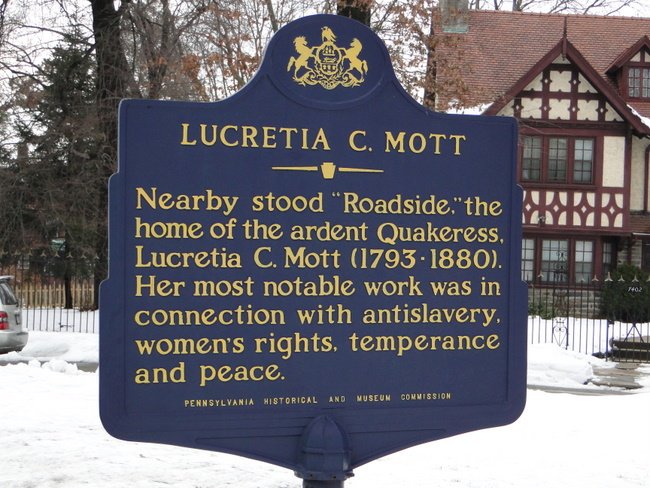 Born in 1793, Lucretia Mott became a Quaker abolitionist and strong supporter of women’s rights. Mott not only believed that slavery was wrong, she also used the wealth of her family to support a nascent boycott movement by Quakers and other abolitionists against any merchant or manufacturer whose products were derived from slave labor. Mott’s home, “Roadside,” served as part of the Underground Railroad for runaway slaves. Following the Civil War, many of Mott’s’ fellow abolitionists considered their movement to have concluded. However, Mott continued to advocate for equality and joined efforts designed to help former slaves secure their economic and political rights. She was especially active in educational efforts and a staunch supporter of the right of former slaves to participate in elections along with other citizens of the republic. In 1866, Mott was elected to lead the American Equal Rights Association.

In 1833, Mott assisted in the creation of the Philadelphia Female Anti-Slavery Society and later served as the president of that organization. Thanks largely to her own efforts to secure greater opportunities for women's leadership in abolitionist organizations, Mott also became a leading speaker and voice inside the growing abolitionist societies of the North. Mott joined her friend Elizabeth Cady Stanton initiated the discussion that started the American women’s rights movement in 1848 in Seneca Falls, New York. In 1850, Mott wrote Discourse on Women in which she explained her beliefs on women’s rights. She believed that women should have the same economic and political liberties as men.

The La Mott Historic District was named in honor of its famed resident, Lucretia Mott, in 1885. The district was largely designed by Mott's son-in-law, Edward M. Davis, who like Mott, was a strong abolitionist. When the Civil War started, Davis allowed part of the land in the community to serve as a military training camp for Black troops for the Union army. Open from 1863 to 1865, the camp was named Camp William Penn and was the first place in the nation built to strictly train Black troops. Following the Civil War, homes were built by Thomas Keenan from the wood that was part of Camp William Penn’s quarters; the village was called Camptown. Originally, members of the white working class lived in the town, but eventually members of the Black working class started to move in as well.  La Mott, then Camptown, became one of the original racially integrated rural neighborhoods.

Lucretia Mott lived in the community until she passed away in 1880. Her home was destroyed in 1911, but the history of her activism and influence has been commemorated by this marker outside the gate to the Latham Park neighborhood.