This historical marker shares the historical significance of the Thomas Farmhouse, which was the location of an important meeting of Union leaders following a victory at Westport. Present at the meeting were Generals Curtis, Blunt, Pleasanton, and Dietzler as well as Governor Corney and Senator Jim Lane of Kansas. The marker was placed in 1964 by the Civil War Round Table of Kansas City.

This historic marker is located near the location of the former Thomas House. 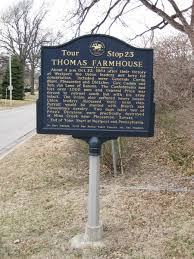 In the Battle of Westport in October of 1864, General Curtis and his Union forces outnumbered and defeated Confederates led by General Sterling Price. This victory proved to be a turning point in Price's Missouri Campaign and ended the last major Confederate offensive west of the Mississippi River. For the remainder of the Civil War, the Union maintained control of Missouri.

At the time of the battle and victory, however, Union leaders feared a return of Confederate raiders and decided upon an aggressive pursuit of Price's army. As a result, Union generals and area government leaders met at the Thomas Farmhouse to make a plan of attack. Curtis wanted a vigorous pursuit while Pleasanton thought his unit was too exhausted for immediate action. Dietzler and Carney wanted their units home in time for the upcoming elections. An agreement was met here, with men under Pleasanton and Blunt pursuing the Confederates. Thanks to this decision, what was left of Price's Confederate army was practically destroyed two days later at Mine Creek near Pleasanton, Kansas.