The McIntyre Building was constructed in 1908–1909 for William H. McIntyre, Sr. who became wealthy in the cattle industry, ranching, and the development of the mammoth mine in Utah’s Tintic Mining District. This building, designed by Salt Lake City's most prominant architect, Richard K. A. Kletting, consisted of reinforced concrete and existed as one of the first fire-proof buildings west of the Mississippi River. 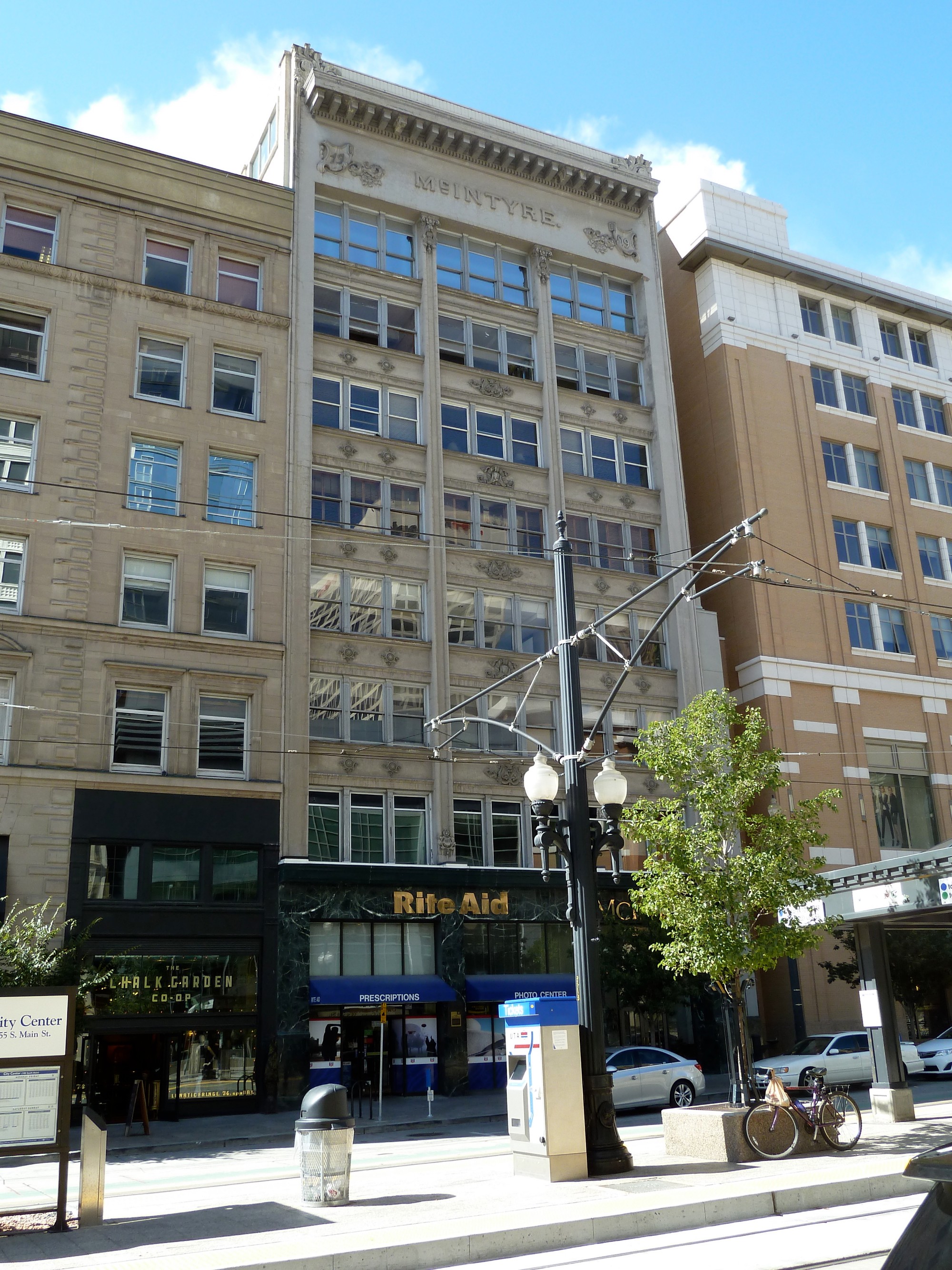 The McIntyre Building was built for William H. McIntyre, Sr., who personified much of late nineteenth-century Western culture by gaining his fortune in horses, cattle, and mining from Alberta to Texas to Utah.  The McIntyre Building, like many structures in Salt Lake at the time, was designed by Richard K.A. Kletting, who also created the original Saltair Resort and Pavilion; Utah State Hospital at Provo; the old University of Utah (now West High School); the Utah State Capital and the original Salt Palace.
William H. Mclntyre, Sr., was born in Grimes County, Texas in I848. His father, a Mexican War veteran, died in 1849 leaving the mother with three children. However, Mrs. Mclntyre remarried to a member of the Church of Ladder-Day Saints (LDS),  who subsequently moved the family to Utah. The three brothers grew up and successfully worked as partners in the cattle business, once purchasing nearly 7,000 head of Mexican Longhorns in Texas for $3.75 a head and then selling them in Salt Lake City for $24.00 a head -- a healthy profit.
That lucrative cattle business would afford brothers Sam and William McIntyre an opportunity to engage in Utah's increasingly successful mining operations. In 1873, the two brothers exchanged the cattle driven from Texas to Salt Lake City for a stake in what became the Tintic mining operation, then owned by Charles Crismon, who took the cattle. The former cattlemen invested money into the property and dug a deeper mine shaft allowing them to find  a vein of gold. Over time, the Tintic Mining District had developed into one of the most productive in the state.
In 1894 Mclntyre bought a 64,000-acre ranch in Alberta, Canada which later became famous for its fine hores and purebred Hereford cattle, which Mclntyre had imported from Wyoming in 1902.
In 1908, with Mclntyre having amassed wealth in both Utah and Canada, he decided to hire architect Richard K.A. Kletting to design and build the seven-story Mclntyre Building that remains standing today. The building opened in 1909 as the first reinforced concrete and fireproof buildings west of the Mississippi River. All of the doors, windows, and trim are made of steel. Additionally, the structure also emerged as one of Salt Lake City's first, and best remaining, examples of Sullivanesque architecture, named after the famous Chicago School architect Louis Sullivan and mentor to Frank Lloyd Wright.
The German-born Richard K.A. Kletting took part in many French projects, such as the designs of the Bon Marche, Credit de Lyonnais, and Sacre Coeur at Montmartre, all in France, before coming to the United States and settling in Utah in 1883. His skill and reputation allowed him to quickly rise to the top of his profession, becoming Salt Lake City's most sought architect. His major works include the original Salt Palace, Saltair Pavilion, State Mental Hospital at Provo, Deseret News Building, Board of Trade Building, Brigham Young Trust Company buildings, the old University of Utah (now West High School, and the Utah State Capital.

Strack, Don. "Railroads and Mining at Tintic The story of the Mines of the Tintic Mining District, and the Railroads That Served Them." UtahRails.net. May 27, 2017. http://utahrails.net/articles/tintic.php.