Chepstow is one of the lavish mansions that makes up the Ochre Point-Cliffs Historic District in Newport, Rhode Island. It was built by Edmund Schermerhorn in 1860 for his family, who summered there for fifty years until it was transferred to R. Horace Gallatin in 1911. The home was bequeathed by Alletta Morris McBean to the Preservation Society of Newport County in 1986. It has been restored to its early 20th century grandeur. According to the Preservation Society of Newport County, “Chepstow is highly evocative of the taste and collections of a descendant of one of America’s founding families, placed in the context of a contemporary Newport summer home.” Today, it is open to the public for tours on a limited schedule. 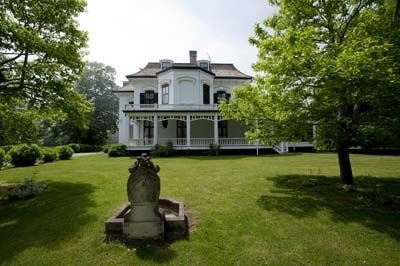 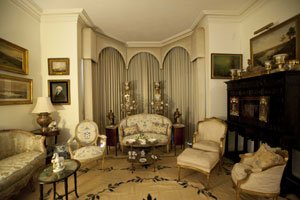 The large, white home located on Narragansett Avenue was once the summer home of the Schermerhorn family and later the Morris family, until it was bequeathed to the Preservation Society of Newport County in 1986. Edmund Schermerhorn had his “summer cottage” built in 1860. It was designed by Newport’s resident architect George Champlin Mason. The home is a large Italianate-style villa located not far from the popular Bellevue Avenue.  Italianate architecture is characterized by square towers, overhanging eaves, low-pitched roofs, and windows that are tall and narrow.  The first-floor windows at Chepstow are further detailed with a round arch.

The last Morris to occupy the property was Mrs. Alletta Morris McBean.  She passed away in 1986.  Her estate bequeathed the real estate to the Preservation Society as well as its furnishings and art collections.  Other documents left behind by earlier members of the Morris-Gallatin family were also found by the preservationists.  Furnishings and other important 19th century paintings from their other residences were brought to Chepstow to complete the historic home museum.

Years later, McBean’s niece spoke about her time at the home. Her name is Alletta Morris Cooper, and she was the daughter of McBean’s sister, Frances Elizabeth.  Cooper told an audience at the nearby St. Michael’s Country Day School that she spent time at Chepstow during the summers in the 1960s.  Her aunt threw fancy dinner parties and later they would play charades in the sunroom.  She also said that the home looked the same fifty years later, except that it was missing the flowers that her aunt used to decorate the rooms.

Chepstow is part of the Ochre Point-Cliffs Historic District which was added to the National Register of Historic Places in 1975. The district consists of multiple buildings in Newport, including some of the Gilded Age mansions, on about 230 acres of land near the water.  Today, the home is open to the public on a seasonal schedule.