The Hell Gate Pathway is a beautiful passenger and bicycle path underneath the Hell Gate Bridge and Railroad Viaduct. The pathway provides Randall’s Island with a route that connects all the recreational uses on the island. The pathway provides beautiful scenery for those whom wish to enjoy a nice walk at Randall's Island Park and is a great opportunity for site seeing experience. The Pathway was developed by the Randall’s Island Sports Foundation (RISF) in public/private partnership with the New York City Department of Parks & Recreation (DPR), additionally supported by many other organizations. 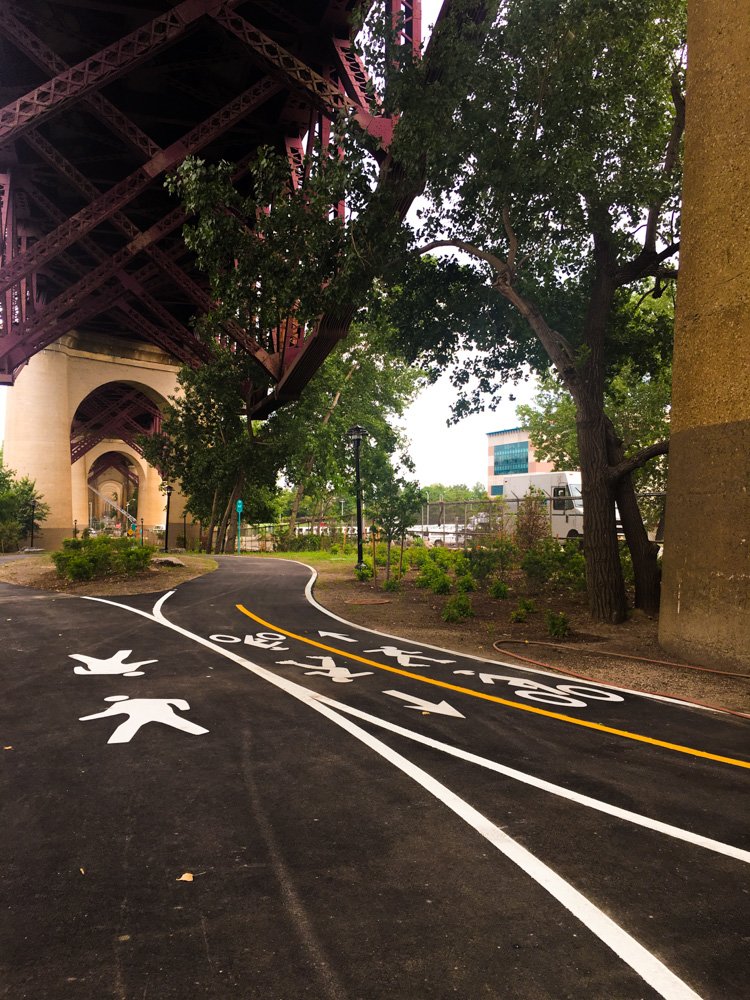 The Hell Gate Bridge and Railroad Viaduct crosses over the notorious ‘Hellegat’, a channel named by Dutch sailors due to the treacherous currents in the East River. As the bridge was initially built for freight traffic, Randall’s Island remains the keystone for the bridge in which connects to the Bronx and Queens. The bridge provides a critical rail link for both passengers and freight along the 457-mile northeast corridor between Boston and Washington D.C. As the Hell Gate Bridge opened in 1917, three short days afterwards the country entered World War I. This quickly resulted in the four track bridge being employed to convey troops to the port cities. From the Hell Gate Bridge stems the viaduct. The viaduct is a long arcade of 100ft high Romanesque arches made of sandy-colored concrete, recalling the form and grand march of a Roman aqueduct.

The route beneath the arcade is what the Hell Gate Pathway became. The Hell Gate Pathway is a pedestrian and bike path that runs through the monumental arcade, connecting to the larger waterfront pathway system that circles the Island. The northern end of the Pathway leads across the Bronx Kill by crossing to the South Bronx Greenway and onward to the larger Bronx Borough Greenway. This industrial corridor of steel trusses and concrete arches is now fashioned for shared use – above by freight and passenger rail traffic, and below by pedestrians on foot and bicycle.

The Pathway was developed by the Randall’s Island Sports Foundation (RISF) in public/private partnership with the New York City Department of Parks & Recreation (DPR). These organizations also worked closely with the New York City Economic Development Corporation. The pathway was also created and funded by a federal DOT Transportation Enhancements Program (TEP) grant with a local match from the Manhattan Borough President, the Environmental Protection Fund grants from the New York State Department of State and the New York State Office of Parks, and the Recreation and Historic Preservation alongside funding from the Office of the Mayor of the City of New York. Amtrak, RISF, and DPR continue to support, fund, and prevent falling debris from the Hell Gate Bridge, assuring safe passage over the pathway below.