Between all of Florida’s notable historic and beautiful sites is a treasure that many people do not know about. This isolated paradise would be Fort Jefferson, which is in the Dry Tortugas of Key West. This incredible island oasis is surrounded by crystal clear waters, beautiful coral reefs, and the unforgettable Key West breeze. The forts history is rich in war and trade, and its placement aided in shaping the future of this country. A jewel long forgotten, Fort Jefferson itself is unique, old, and important to the history of not only Florida, but the United States as a whole.

A frontal view of Fort Jefferson. 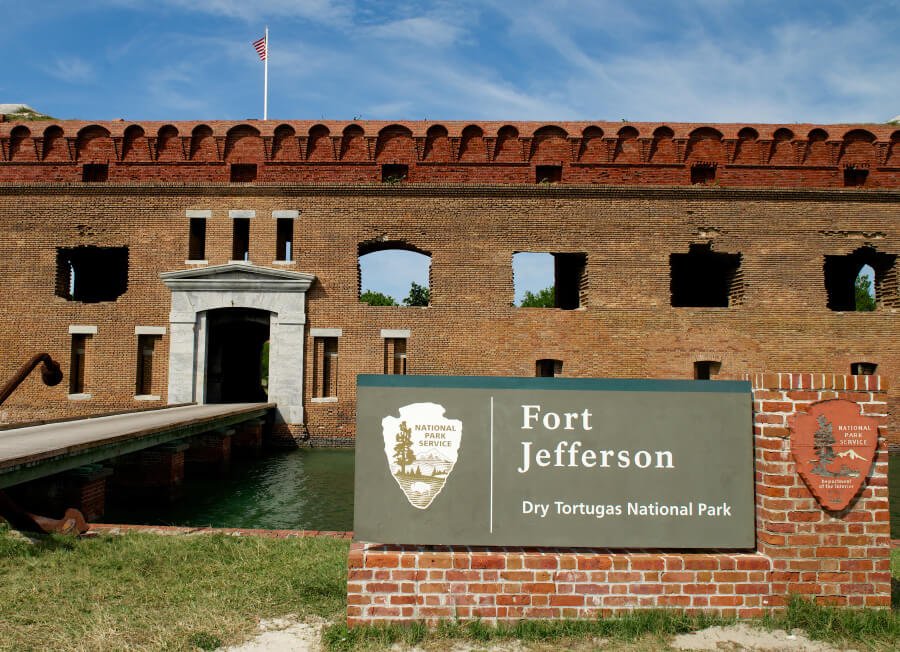 An aerial view of the fort. 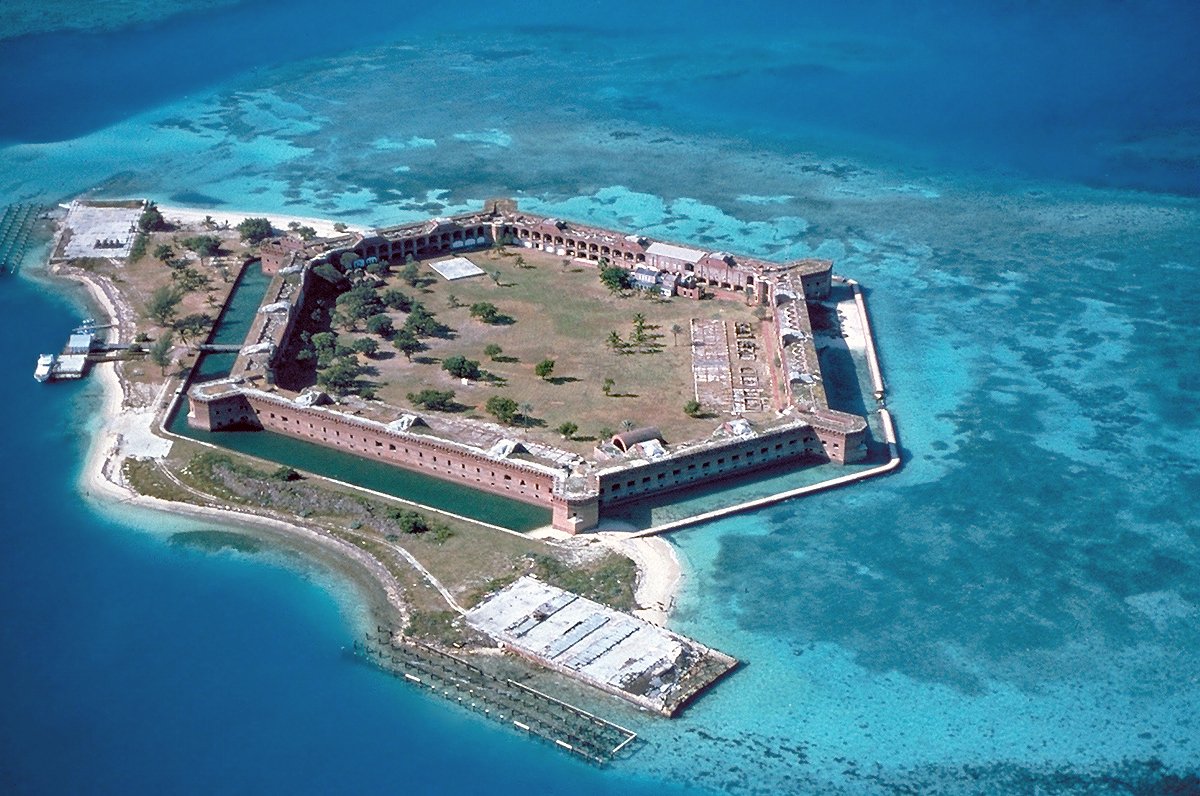 Along the beaches on the island. 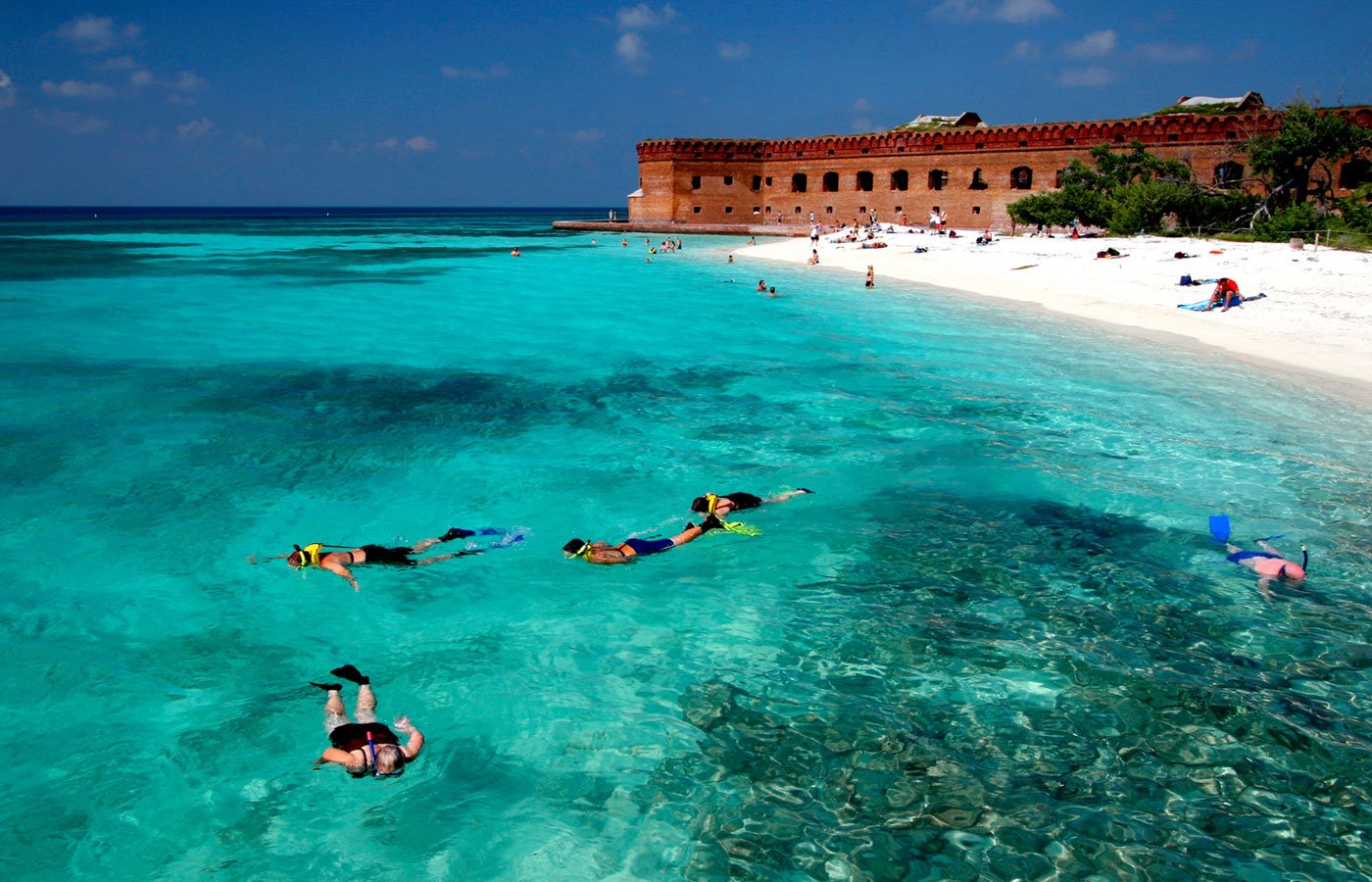 A pristine view of the waters near Fort Jefferson. 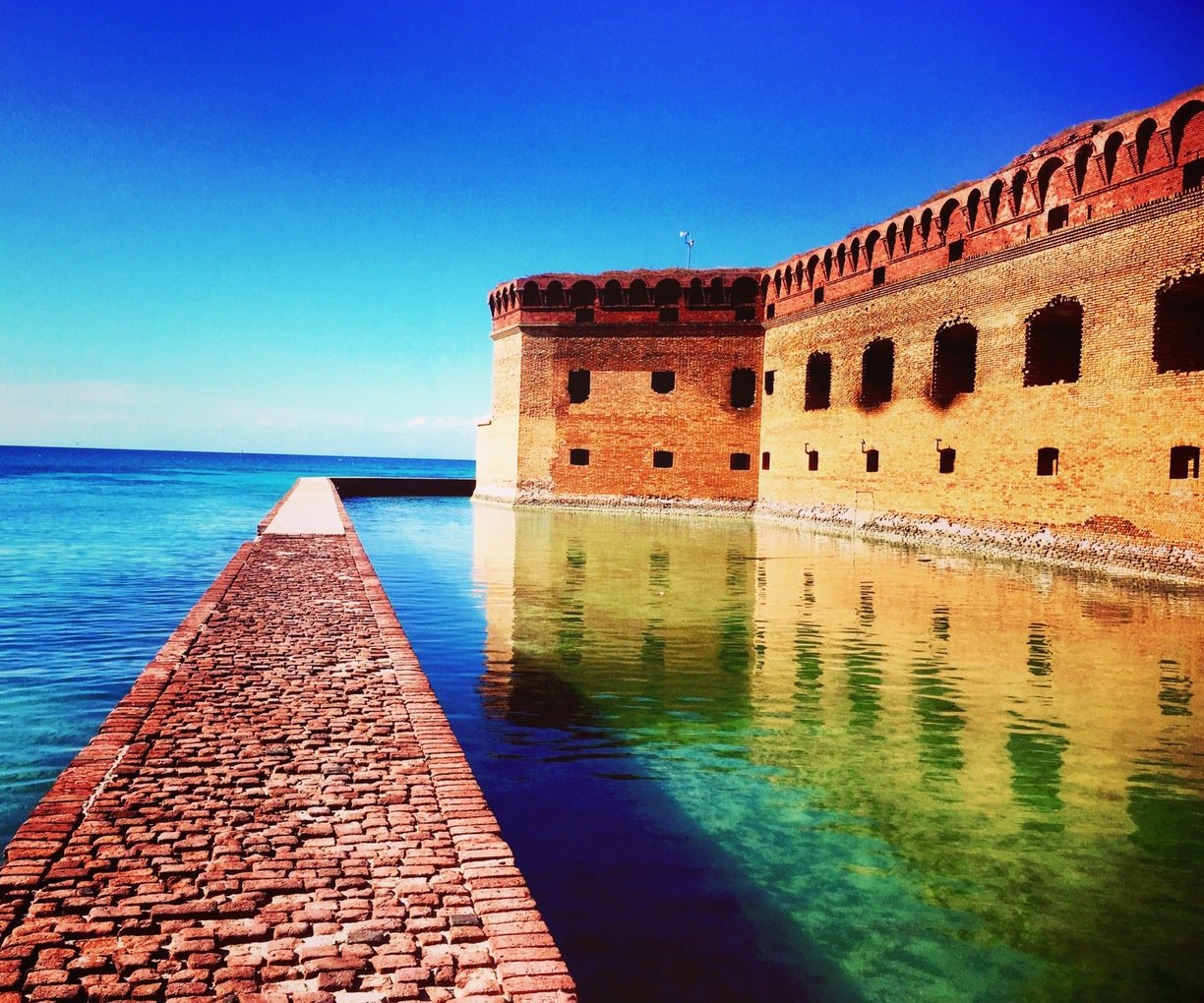 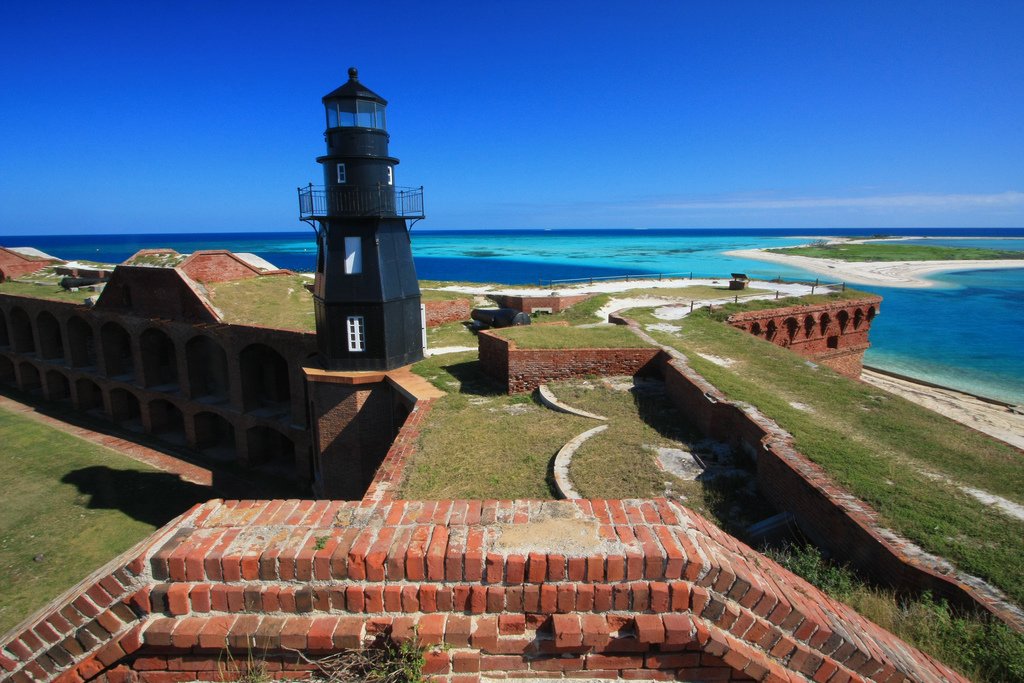 Another aerial view of the island. 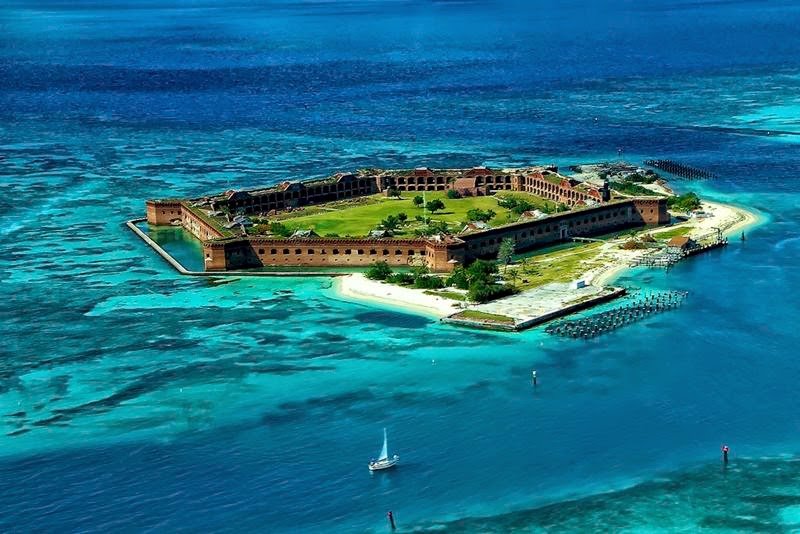 The halls of Fort Jefferson. 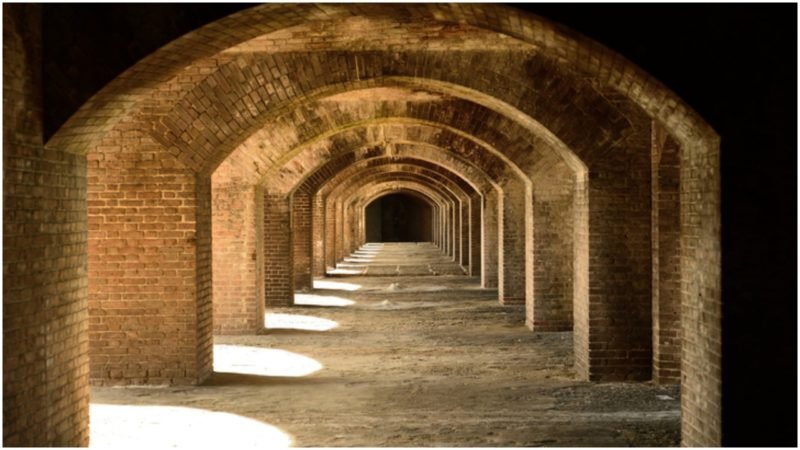 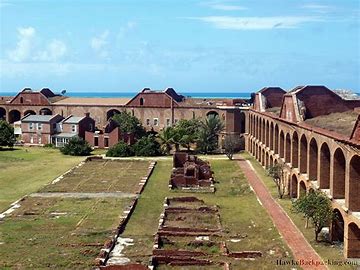 When people think of Key West, they think of clear blue waters, long calm beaches, and the ultimate vacation spot. Most individuals do not think of the old brick structure called Fort Jefferson. It is an isolated island located “about 70 miles away from key west” (Sandler) a place that can be reached through ferry rides, private boat rides, public boat rides which are offered daily, the trip departs early in the morning and return late afternoon (only two boat lines are offer) and/or plane rides.

This 7 groups of coral reefs based land is called Dry Tortugas, was named by Ponce De León. “Tortuga” refers to the turtles that used the beaches as nesting grounds. Dry was added later to let sailors know there was no fresh water in the area. The fort building took around 30 years and 16 million bricks to build, which makes it one of the largest brick structures in the western hemisphere, but it was never completed nor was fully armed. It's a six sided building. Two of the sides measured out over 325 feet long while the other four were 477 ft long. Also including eight foot thick walls that stretched up to fifty feet tall preventing escapes and intrusions. In the article written by the National Park Ferry Fort Jefferson is described to be “the largest masonry structure in the western hemisphere”. Fort Jefferson was also surrounded by moats. The fort itself carried room to arm 420 heavy guns.

The fort was named after President Thomas Jefferson. “Fort Jefferson was begun in 1846 to protect anchorages on the only shipping channel into the Gulf of Mexico. Building continued until 1875 with slaves of African extraction doing much of the construction under the direction of the US Army Corps of Engineers. As many as 40 million bricks were used for the inconceivably ambitious project.”

The Forts location is a key part in why it was built. Its location determined who controlled trading up into the mainland, whoever had hold of the Fort, controlled the trading. In his article, “The Fortress of the Dry Tortugas,” Willie Drye states, “Any nation that established a base of operations in the Tortugas could easily control shipping all along the Gulf Coast, so the U.S. began building Fort Jefferson soon after Florida was admitted as the nation's 27th state in 1845.” As we can see, the fort location was chosen for a reason and used strategically. “Never completed, the fort nevertheless housed 2,500 soldiers, workers, and prisoners at a time during the Civil War.” At the end of the Civil War, 1865, the Fort’s population declined to 1,013, consisting of 486 soldiers or civilians and 527 prisoners” (Stalter).

War and trade shaped the way this Fort was used. Maybe its most important role, was in the Civil War. During the Civil War, the Union took control over the Fort to create a blockade against the confederacy. This strategy greatly gave the Union the upper hand because it cut off shipping lanes that the confederacy would have used to ship weapons and goods in for the war. “While Fort Jefferson never witnessed a battle, it helped prevent the Confederacy from ever seriously threatening Union control of the shipping lanes. During the Civil War the Union used the fort as a prison for deserters, and it was garrisoned by some of the first Black soldiers to serve in the U.S. military.

Its most famous prisoner was Dr. Samuel Mudd, who treated John Wilkes Booth's broken leg after the actor shot President Abraham Lincoln. Mudd was imprisoned at the fort for four years after his conviction as a conspirator in the plot to kill Lincoln.” During the stay of Dr. Mudd the yellow fever hit the fort. Dr. Mudd was hit by it as well, but he helped other prisoners to recover from this illness when he was weak, so President Johnson pardoned Dr. Mudd for his act of kindness. He returned home and “continued to practice medicine. He died in 1883 at age 50” (Sandler).

The fort was abandoned because it was hit by several hurricanes but Later in the years, the Us navy took the fort as a base to invade Cuba during the Spanish -American war and in 1909 the island was claimed as an offshore national Monument by President Franklin D. Roosevelt and President George H. W. Bush signed an act to upgrade the statue of the fort from National Monument to a National park.

Some things to see nearby the fort are fort Zachary Taylor, east and west Martello tower, watch the famous Fort Jefferson`s display of six 15-inch Rod man guns which is considered the largest collection of rod man guns in the world and Truman little white house.

Although this quaint and peculiar structure sits in the middle of beautiful water in Florida’s most southern point, its role in our country’s history should be recognized as it helped shape our country, as we know it today. From being the backbone for shipping lanes for the union to a prison for war criminals, Fort Jefferson is rich in history and she be preserved for future generations to enjoy.