As of 2018, Beal's Jewelry is the only business to remain in its original downtown location many decades after one of the city's greatest catastrophes. Almost exactly 10 years after the biggest flood in Ellsworth's history destroyed much of the city's downtown, an arson's fire gutted the same area, destroying 130 buildings despite the efforts of more than fourteen local fire departments. The arson was caught and confessed weeks later, and subsequently committed to an institution for the criminally insane. Despite the extent of the damage, Ellsworth rebuilt quickly, incorporating the latest Art Deco architectural motifs of the 1930s--some of which survive in nearby buildings to this day.

The fire raged for 7 hours. Despite the efforts of hundreds of citizens, 130 buildings were destroyed, including Ellsworth's city hall. (Maine Historical Society). 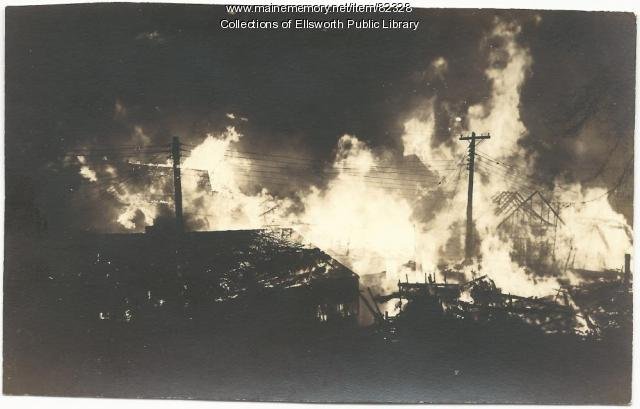 Hancock Hall, Ellsworth's city hall at the time. Citizens attempted to save it by dynamiting a nearby building to deprive the fire of fuel. Instead, burning debris was hurled into Hancock Hall, razing it to the ground. 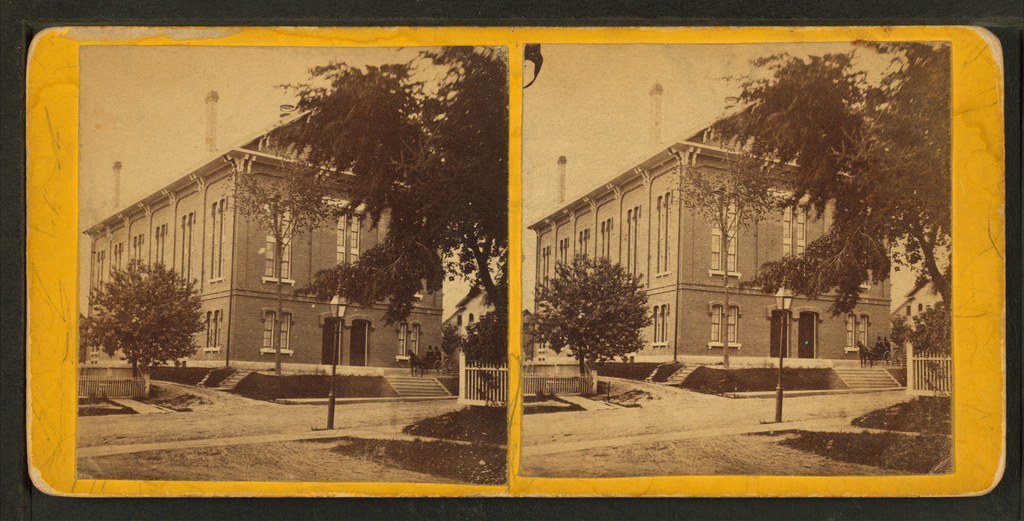 The wreckage of Hancock Hall. A new city hall was completed several blocks away, in 1935. (Maine Historical Society). 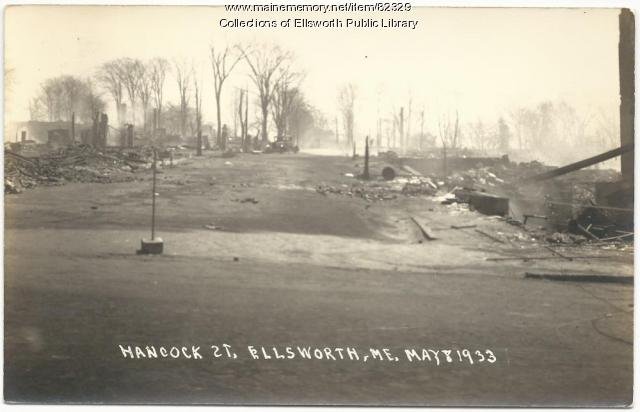 Another view of the destruction up Main Street. (Maine Historical Society). 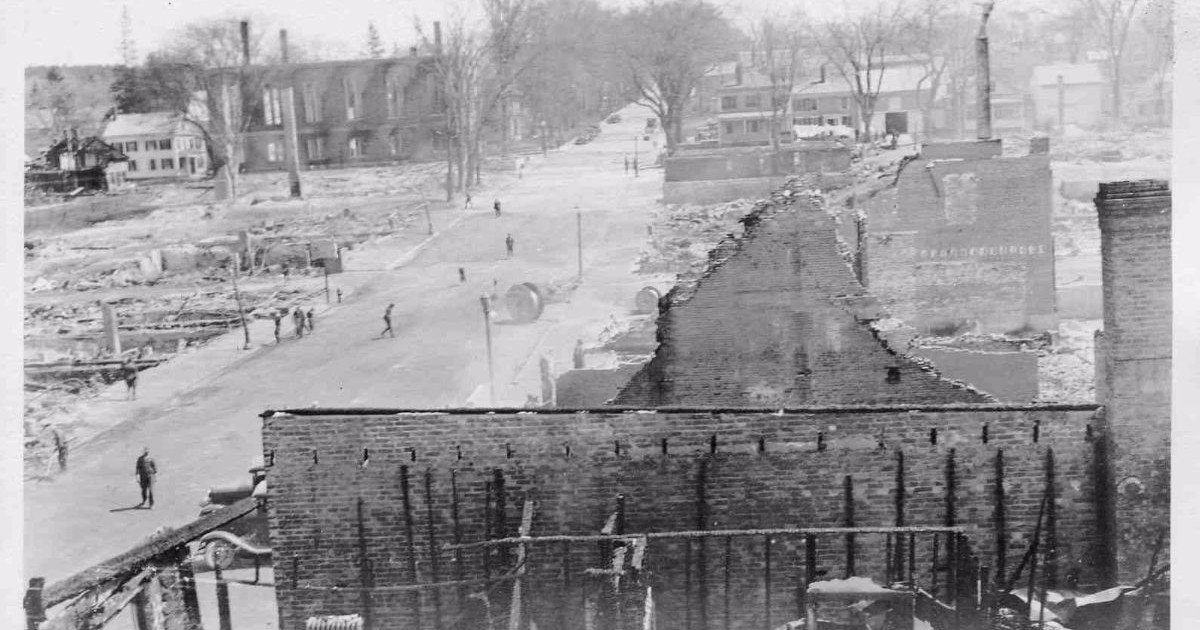 A panorama of the devastated downtown district.

Main Street rebuilt only a few years later. The presence of the Grand Theater, at left, indicates this postcard's date of origin as after 1938, when the theater was completed. 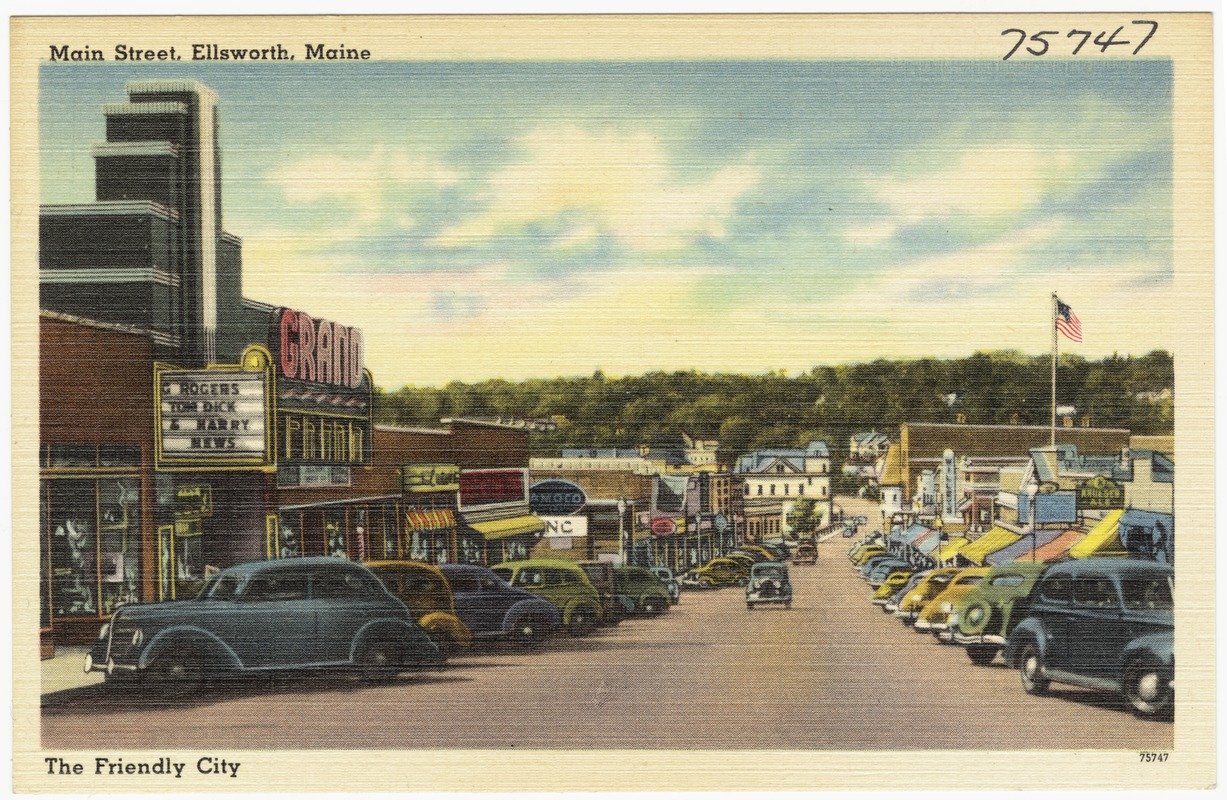 Such was the optimistic view of a reporter for the Bangor Daily Commercial in the aftermath of the massive fire that swept through Ellsworth’s downtown business district on May 7, 1933. A number of fires, believed by locals to be the work of an arsonist, had already threatened the area that season, but caused no serious damage. That Sunday, however, the building set aflame was the old Bijou Theater, abandoned for some time and now used as shop storage. Ironically, a number of citizens had recently requested the derelict building be condemned and torn down, citing it as a fire hazard.

At about 9:30pm the Ellsworth Fire Department received word of the blaze and responded with the few trucks at their disposal, but the fire spread rapidly among the timber-frame buildings of Main Street. It raged across several blocks for the next seven hours, involving firefighters and off-duty police officers from at least fourteen local departments. Ordinary citizens also contributed with garden hoses and bucket brigades. The water mains of the city were empty by 1am, and water had to be pumped over from the nearby Union River.

As the fire consumed buildings rapidly along both sides of Main Street, locals sought to stop it at School Street and Main, devising a plan to dynamite a building between the fire and Hancock Hall, Ellsworth’s city hall at the time. With this buffer, it was felt that Hancock Hall’s brick walls would be safe from the blaze. Unfortunately, too much dynamite was used, hurling burning debris across the street through Hancock Hall’s now-shattered windows. The structure was burned along with the rest of Main Street.

The fire raged for seven hours. The next day, citizens were greeted by the sight of their downtown district razed to the ground. Soon, however, state militia, state police, and American Legion members poured into the area to help the local police hunt for the arson while people picked through the rubble. The region’s newspapers expressed optimism about reconstruction. And a few weeks later, Ellsworth’s sheriff department tracked down a dishwasher from a local restaurant named Norman Moore who had suspiciously disappeared and begun working on a farm immediately after the fire. Eventually, Moore confessed to the fire without displaying any remorse or awareness of its human consequences. He was sentenced to confinement in a state institution for the criminally insane in September 1933.

Ellsworth rebuilt in the latest style, highlighted by a slew of Art Deco/Moderne structures--including the Grand Theater, completed in 1938, which remains to this day. Anew City Hall completed was in 1935, though this unique Georgian Revival building was relocated several blocks away from the old site of Hancock Hall.