Established in 1852, the three-story main building, which what was once named Western Carolina Male Academy, is now the Eastern Cabarrus Historic Museum. This museum provides a glimpse into mid-1800 to early-1900 rural Cabarrus County life. This museum is open to the public hosting special exhibits and open houses on a wide variety of topics. There is also a library available inside the museum open for genealogical and other research.

Eastern Cabarrus Historical Society and Museum is located in a historic building that was home to an antebellum men's school. 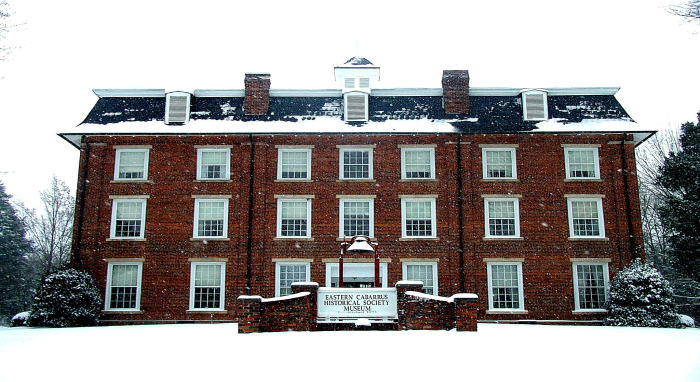 The Eastern Cabarrus Historical Society was formed in 1973 by citizens residing in and around Mt. Pleasant. This group purchased the old North Carolina College/Mt. Pleasant Collegiate Institute building and began its renovation to be used as a local museum. The Museum was opened to the public in 1980. It holds 30 exhibit rooms that hold artifacts and items from early life in Cabarrus County. The building housing the museum used to be called Western Carolina Male Academy, which was built between 1853 and 1855. The school would be renamed North Carolina College in 1859.

The academy suspended operations and studies during the American Civil War, but would reopen soon after in 1865. The school remained in active state until the year of 1902 with the last graduating class leaving in May 1901. It was reformed into another school called the Carolina English & Classical School until in 1903, the new school took over and was named Mt. Pleasant Collegiate Institute. The school operated until the year of 1933. For the next 40 years, the building was regulated to being used as an apartment complex and a storage building.

In 2013, the Society opened the second building on the site known as Society Hall. This building contains their offices, the library, a kitchen, a small meeting room, and a large lecture hall.  Each room in this museum is themed and contains items donated or loaned to the Society by local citizens. These items range from old farm tools, vintage clothing, antique toys, and old items from military conflicts from the Civil War Era. The museum

is even listed on the National Register of Historic Places.

The museum is open March 1 - October 31. Hour: Saturdays 10:00AM- 3:00PM Contact the museum for group tours. Some programs and special events are scheduled on Sunday afternoons. Reopens in early December for a Christmas Open House.