Buffalo native Ani DiFranco was a singer-songwriter who created Babeville – a multi-use facility devoted to the arts. She saved and then converted a historic church into this performing arts space. DiFranco also created an indie label, Righteous Babe Records. Buffalo’s chapter of the LGBT movement spans back long before DiFranco. During the 1950s, the city’s gay scene flourished, but the following decade ushered in a new political landscape, and a need for the community to organize became apparent. Buffalo helped fashion the idea of an LGBT community center in the ’60s. The grassroots effort operated seven days a week and published a gay newspaper called “5th Freedom.”

Built in 1871 as the Delaware Avenue Methodist Episcopal Church, Babeville is an arts venue founded by musician Ani DiFranco, who is a native of Buffalo. 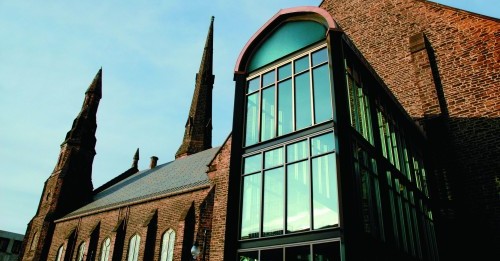 Most notable of Buffalo’s LGBT-activists through the years is Madeline Davis, founding member of the Mattachine Society and the first openly gay speaker at a Democratic National Convention in 1972. She co-authored “Boots of Leather, Slippers of Gold,” a study of Buffalo’s lesbian working class from the 1930s through 1960s, which became universally recognized as the definitive work on the socio-economic topic.