Constructed by Thomas Edison from wood and tar paper in the winter of 1893, the Black Maria Studio was the first movie studio built in the United States. Edison constructed the makeshift studio and positioned it atop a rotating platform to allow him to make adjustments related to the position of the sun. Edison created the studio after his previous invention of the Kinetoscope, an early motion picture camera. The studio stands on the same property as Edison’s former home, Glenmont, and one of his laboratories. The name of the studio comes from its appearance, as Edison’s workers believed that their creation looked like a “Black Maria,” a 19th century New Jersey nickname for a police wagon.

The Black Maria today. Photo from the National Parks Service. 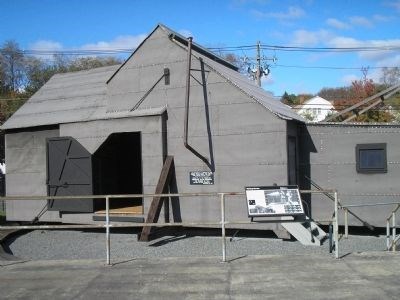 The Black Maria shortly after construction. Photo from the National Parks Service. 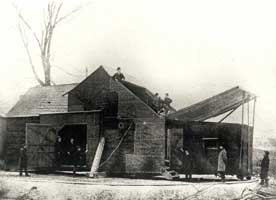 Thomas Edison was born in Ohio in 1847 but grew up in Michigan. He did poorly in school, despite interests in reading and tinkering. As a young man, Edison worked as a telegrapher. His first success as an inventor came by improving the way stock tickers worked. In the 1870s, Edison went on to invent the phonograph and the light bulb. After the death of his first wife, Edison remarried, and the couple moved to Glenmont. Glenmont was a mansion in West Orange, New Jersey where he would later add a laboratory in 1887. There, he invented the Kinetoscope.

Before the invention of the Kinetoscope, there were other devices that could produce “moving pictures.” Magic lanterns, for example, projected images from glass slides and could be switched out quickly to give the illusion of movement. There was also the Zoopraxiscope and the Chronophotographe, the inspirations for Edison’s invention. One of Edison’s assistants, William Kennedy Laurie Dickson, who had experience with photography, was tasked with creating a motion picture camera. He worked on the project hands-on with assistant William Heise while Edison supervised. The Kinetoscope was completed in 1892 and first demonstrated in 1893.

Once the Kinetoscope had been invented, Edison and his team needed to film content. So, they began building a stage out of wood and tar paper in the winter of 1893. The studio sat atop a lazy Susan so that it could be turned to the best position for sunlight throughout the day. It also had a retractable roof to allow light in (since artificial lighting for film would come later). They filmed shorts with celebrities such as Annie Oakley and oddities such as acrobats. Filming ceased in 1903 because, by then, Edison had a better studio in New York City.

The first Black Maria Film Festival was held in 1981. The festival focuses on the art of the short film. There is an international jury to judge the best works presented. They encourage provocative works that speak out for people who have little voice in feature-length films or the mainstream media in general. The festival is hosted by fifty to sixty different institutions as a means of bringing a film festival to cities that are not home to one. The Black Maria Film Festival not only bears the name of the United States’ first film studio but also tries to live up to its legacy of innovation and creativity.