The people who ran South Bend’s first indoor, city-owned swimming pool denied entry to African Americans for thirty years. Its transformation into the Indiana University South Bend Civil Rights Heritage Center is a powerful symbol of how the past must be bravely recognized and rectified. 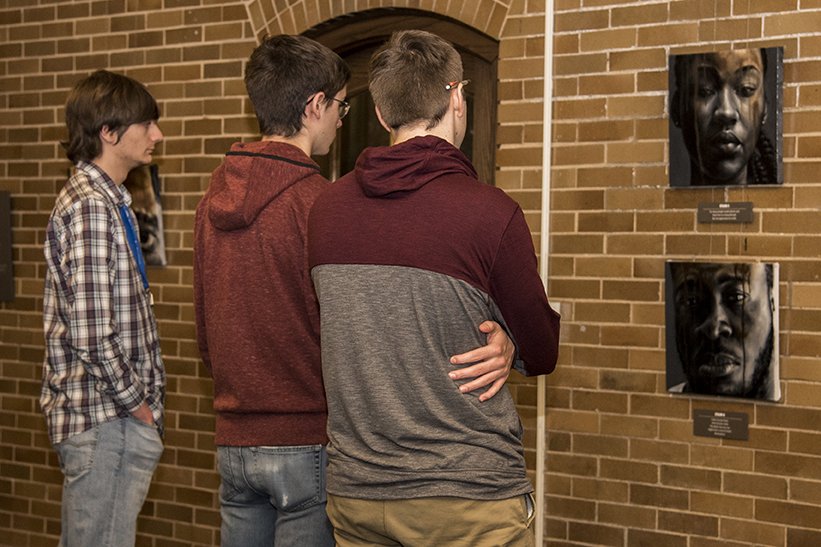 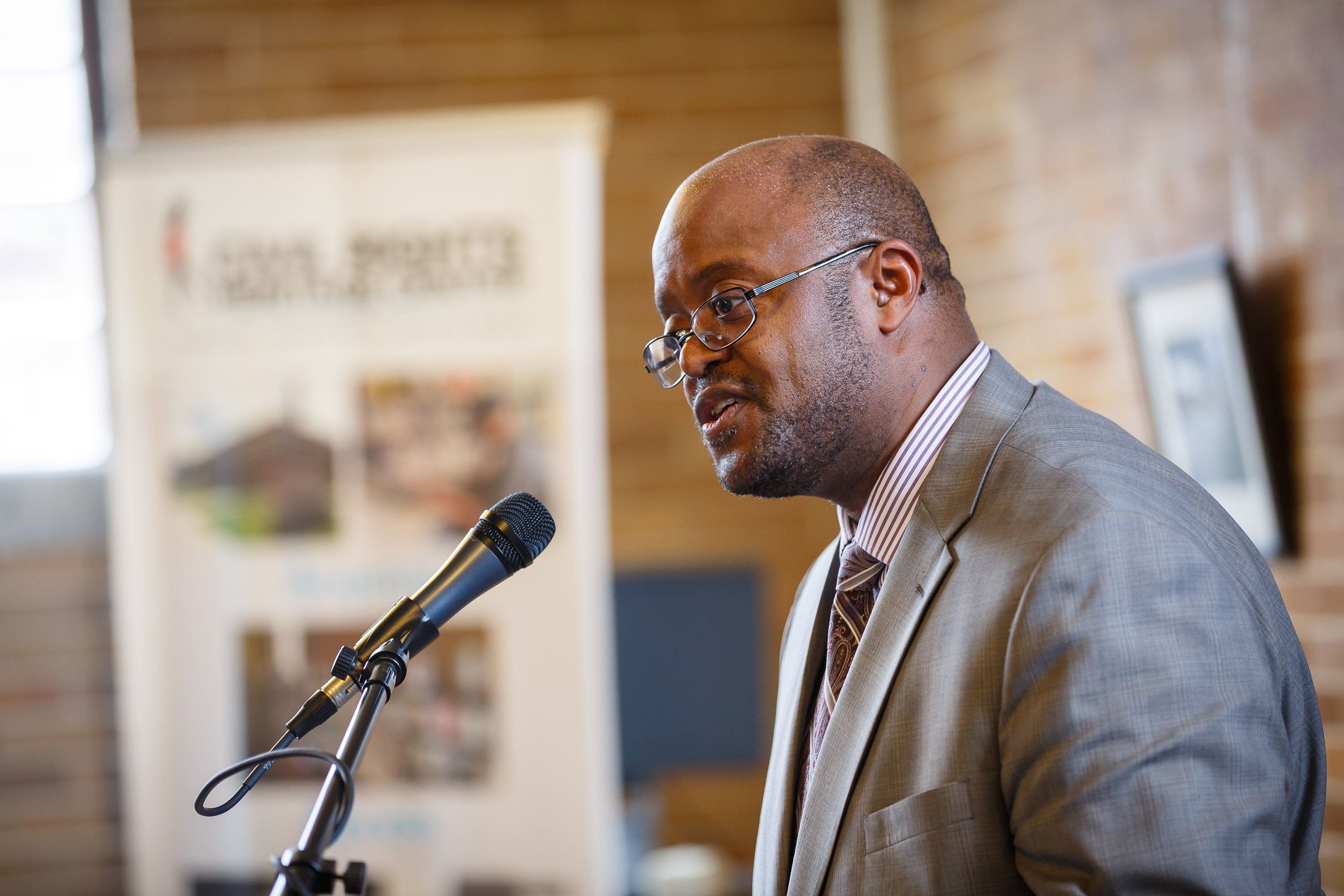 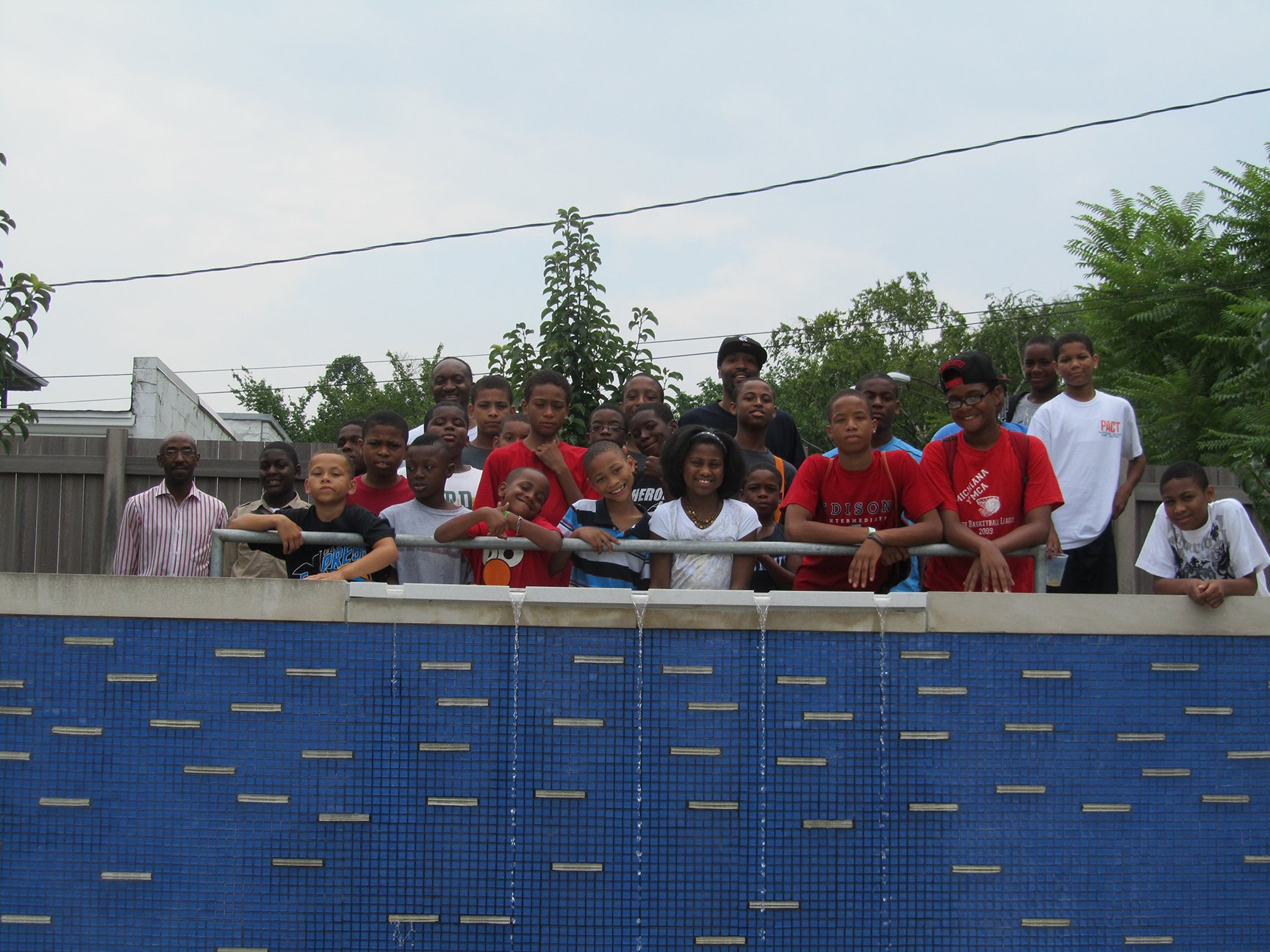 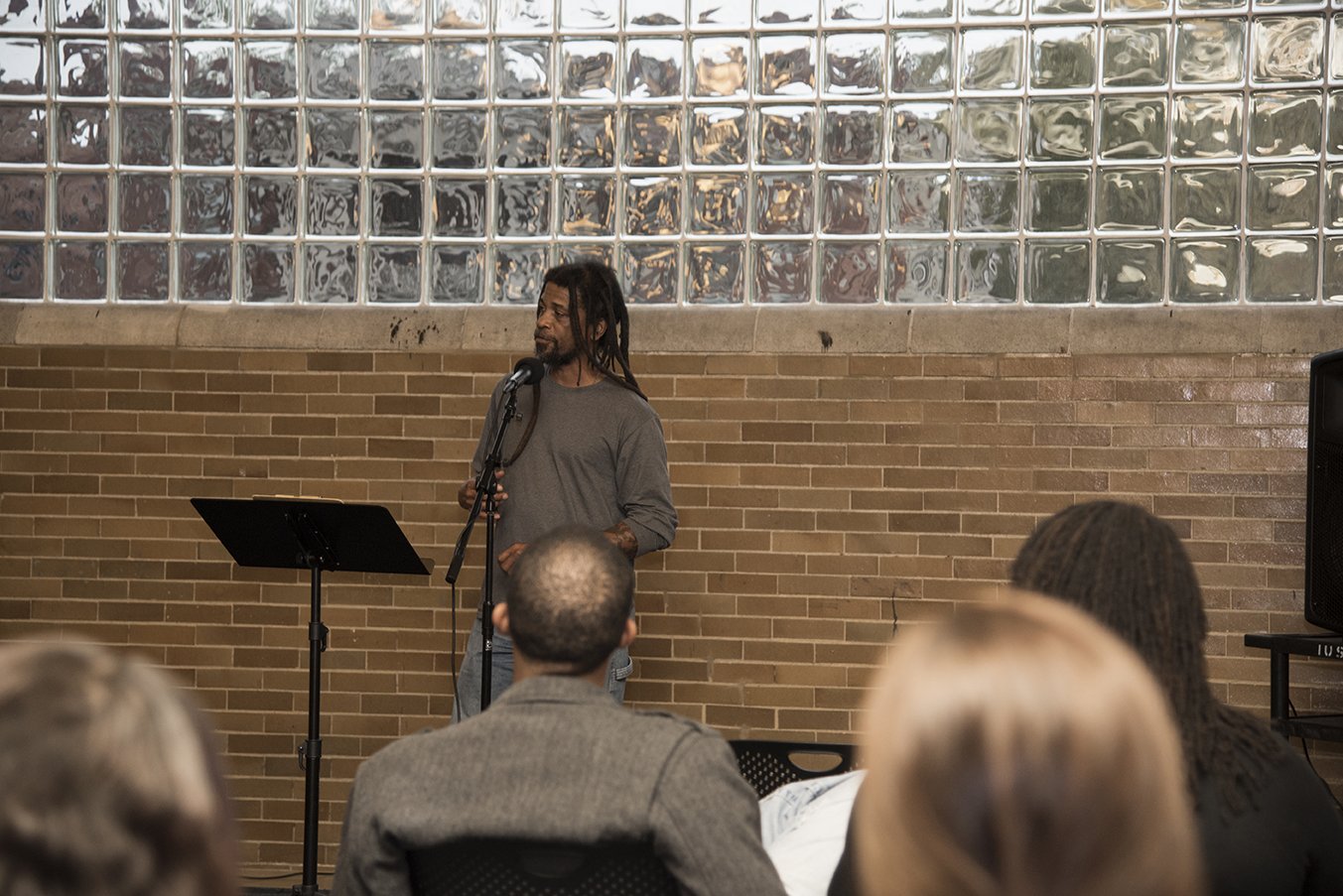 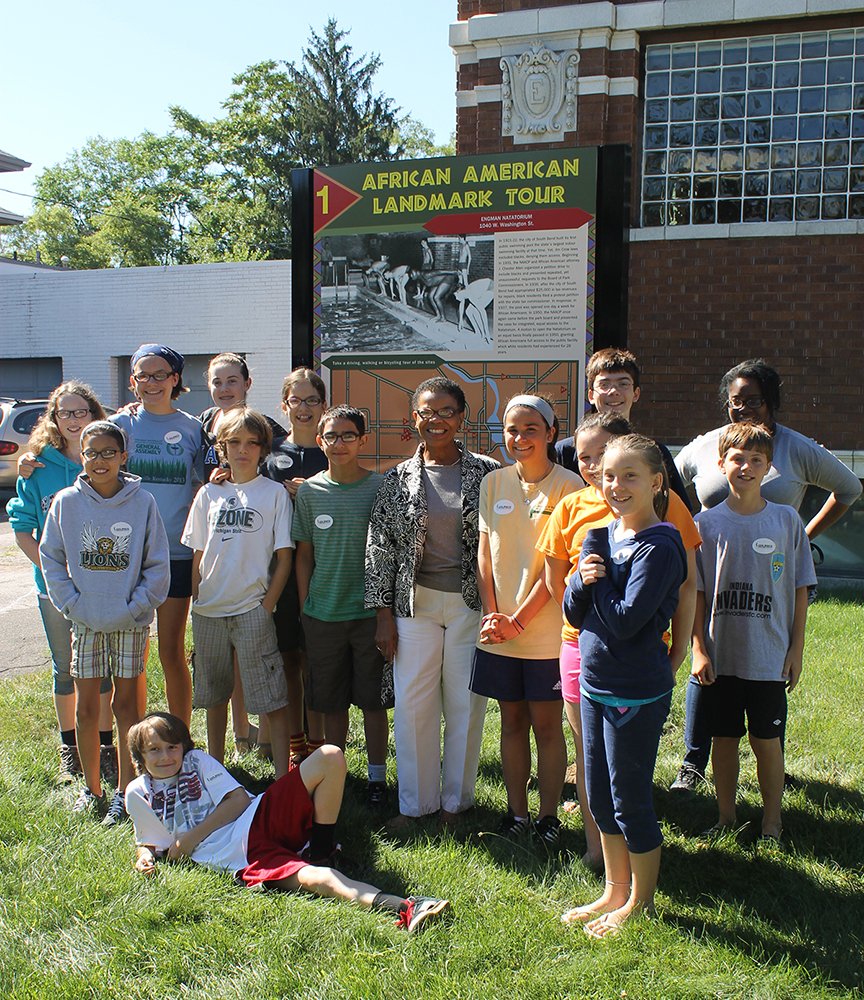 Built in 1922, the Engman Public Natatorium was the City of South Bend’s first city-owned swimming pool. Despite the word “public” carved in its facade, the Natatorium denied entry to African Americans for fourteen years, then segregated people for fourteen more. As a taxpayer funded institution, the Natatorium became a focus of early 20th century civil rights action from a coalition of Black and white lawyers, politicians, and other professionals. The pool closed in 1978 and sat abandoned for almost thirty years before Indiana University South Bend students and faculty led neighbors, city leaders, and local non-profits to transform it into a place of learning, healing, and action against injustice for the 21st century.

As early as 1881, public calls came to reduce drowning deaths in South Bend’s St. Joseph River. The South Bend Tribune called a city natatorium to teach swimming “a necessity, not a luxury.”[1] Twelve years later, with no action and continued deaths, the Tribune wrote: “A crying need of South Bend is a natatorium. It has been talked of and written of and schemes have been proposed, but as yet nothing of the kind has developed.”[2] In January 1919, at an address to the South Bend Chamber of Commerce, A.R. Erskine, President of the Studebaker Corporation, clearly stated his belief that a natatorium is one mark of a city’s progress: “[W]e need more schools, churches and hospital facilities; also a natatorium or city bathing beach, and every other improvement we can possibly get to make South Bend an attractive, beautiful city.”[3]

Finally, in June 1919, the South Bend Common Council voted to build a natatorium. Two weeks after their vote, the South Bend Parks Board of Commissioners formally announced it would be built near the corner of West Washington and Chapel Streets, on land donated by Harry and Maude Engman.[4]

On the evening of June 29, 1922, several hundred people attended a two-hour long public opening event of the new Engman Public Natatorium. It officially opened for regular swimming on July 2, 1922. In a booklet entitled South Bend World Famed listing all of the wonderful reasons why people should move here, the Natatorium is called, “a great asset.”[5] By September 1922, the Parks Board estimated almost 10,000 people took advantage of the brand-new facility.[6]

Not everyone had the opportunity to use this supposedly “public” asset, however. The people who ran the Engman Natatorium chose to institute a full ban on African American people. The full ban lasted fourteen years, when another fight over additional funding to fix the faltering new building provided leverage for local activists.

In 1931, the South Bend Chapter of the National Association for the Advancement of Colored People (NAACP) challenged the natatorium’s racist exclusion with a petition delivered to the Parks Board. Itforeshadowed arguments that would be repeated for years—that, as taxpayers, people of color deserved equal and unrestricted access to the places their dollars were supporting. It invoked the arguments made for constructing the natatorium in the first place, stating:

By reason of such exclusion of colored men, women, and children from the enjoyment and [comfort] of said Public Natatorium the colored populace has no safe place to which they may resort for the purpose of swimming… [People] are compelled to seek such dangerous opportunities for swimming as the nearby rivers, gravel pits, and so-called swimming holes… [A] youth of the colored group of this city did lose his life by drowning last summer while swimming in one of the abandoned gravel pits of this city.[7]

The same Parks Board that invoked drowning deaths of young swimmers as inspiration to build the Natatorium, resisted ten years later when facing a similar call to protect Black lives against drowning.

In October 1936, a new petition was signed by thirteen African American taxpayers (including reporter and politician Jesse Dickinson), “on the ground that colored citizens are excluded from using the natatorium.”[8] After five years of delaying much needed fixes to the building, the Natatorium was declared unsafe and the Parks Board had closed it to make repairs.[9] Since the repairs required significant additional taxpayer money, J. Chester Allen—one of the lawyers with the NAACP who signed the petition against exclusion—leveraged a state law requiring that city appropriations must be passed through the State Tax Board and that protests against any appropriation would be heard by the Tax Board as well.[10]

This brought in John Rothrock, representative of the Indiana Board of Tax Commissioners, to hear the case and arbitrate. He first stated:

I have never seen a city the size of South Bend that did not own and operate sufficient bathing facilities and that did not provide facilities for colored people. You have about 5,000 colored citizens here and they must be given a chance to swim, otherwise they will swim some place without protection.[11]

However, he then ruled: “I do not approve a plan to permit colored persons to use the natatorium at the same time as white persons, but I do think that a schedule should be arranged whereby the colored persons can use the pool.”[12]

The schedule allowed for segregated use only once per week, on Mondays. This was hardly full and equitable access, and it continued to reinforce racist ideas about Black and white human beings inhabiting the same spaces together.

Finally, in a February 1950 challenge at the meeting of the Parks Board, Attorney J. Chester Allen joined with other NAACP organizers including attorneys Zilford Carter, Charles Wills, and a white ally from the Jewish community, Maurice Tulchinsky, to threaten further legal actions if the Natatorium did not end their racist policy. The Parks Board aquiesced, voting that, “there is to be no race, creed or color discrimination at the Public Natatorium and henceforth attendance and classes, private classes excepted, will be open to all alike…”[13]

Though officially not allowed, some segregation did continue. Willie Mae Butts remembers it being around 1957 or 1958 that she tried to enroll her young son in one of the aforementioned “private classes” so he might be able to save her if she were drowning (she did not know how to swim herself). An employee first told her the class was full. She called back six weeks later at the start of registration for another class. The employee told her, “they haven’t given me the okay to enroll any colored kids.”[14]

By the 1970s, the Natatorium had operated for over fifty years. It was no longer “a great asset” like it was in 1922. It was smaller, significantly older, and less modern than the many other swimming facilities in South Bend. Paul McMinn, last director of the Engman Natatorium, remembered its final months:

We had repairmen coming all the time... It basically was on its last legs, and...the cost of just trying to keep it up, at some point...the ceilings and everything started to fall in.[15]

At a Parks Board meeting on July 10, 1978, members weighed the Natatorium’s anticipated $190,000 building repair costs plus $37,050 annual operating costs against the roughly $2,000 in annual ticket sales and came to a unanimous decision to close it.[16]

The Natatorium sat vacant and continued to crumble for decades.

The Natatorium’s neighbors found their partner and savior from a coalition of students, faculty, and staff at Indiana University South Bend. The Civil Rights Heritage Center formed on campus in 2000 to “use the American Civil Rights Movement as living history to promote a better understanding of individual responsibility, race relations, social change and minority achievement.”[xxxii] In 2005, Civil Rights Heritage Center historian David Healey submitted a three-page treatise titled, “The Natatorium Project,” proposing IU South Bend use the Natatorium as a historical, cultural, and outreach center.[17]

On May 23, 2010, almost 88 years after thousands of white people gathered to get their first tour of the brand-new swimming pool, a diverse crowd gathered to see it transformed. Hundreds marched along West Washington Street to see the Natatorium’s new purpose as a home to the Indiana University South Bend Civil Rights Heritage Center.

Then-Mayor Steve Luecke welcomed Barbara Brandy as the first invited guest. Ms. Brandy had told a story from when she was nine years old, wearing a red bathing suit her grandmother had made for her. She recalled arriving at the Natatorium and people staring at her as she tried to enter. She was turned away for coming on the wrong day.[18] Ms. Brandy became the first guest invited to enter so Mayor Luecke could offer her a formal apology on behalf of the City for the discrimination faced by her and thousands of others.

Ever since, people continue to gather there. Instead of the sounds of swimmers and splashes echoing around the brick walls, what echoes today are the sounds of people talking with each other, confronting difficult histories, and building coalitions to directly challenge the systems that continue to oppress people. A place that exemplified the fight for early twentieth-century injustice is now a hub for action against early twenty-first-century injustice.

In August 2018, the City of South Bend’s Historic Preservation Commission—with a unanimous vote of the Common Council—designated the Natatorium a locally protected historic landmark, providing a strong legal framework against any major alteration or destruction of the building.

The sites included in the Indiana University South Bend Civil Rights Heritage Center African American Landmarks Tour are crucial to obtaining a better understanding of the growth and development of the county's black community from the 1830s through the middle of the 20th Century. The tour includes homes of prominent black leaders, black-owned businesses and institutions such as churches that played a significant role in the history of the area's black residents. The tour was organized by the Indiana University South Bend Civil Rights Heritage Center in partnership with the Northern Regional Office of Indiana Landmarks. The tour is underwritten in part by grants from the National Trust for Historic Preservation and Indiana Humanities.

The sites included in the Indiana University South Bend Civil Rights Heritage Center African American Landmarks Tour are crucial to obtaining a better understanding of the growth and development of the county's black community from the 1830s through the middle of the 20th Century. The tour includes homes of prominent black leaders, black-owned businesses and institutions such as churches that played a significant role in the history of the area's black residents. The tour was organized by the Indiana University South Bend Civil Rights Heritage Center in partnership with the Northern Regional Office of Indiana Landmarks. The tour is underwritten in part by grants from the National Trust for Historic Preservation and Indiana Humanities.