The Buffalo Museum of Science offers an extensive collection of over 700,000 specimens and artifacts that represent all facets of the natural world. The museum places a regional emphasis on Western New York and many of its exhibits are interactive and immersive. In operation since 1929, the museum also presents a wide variety of programs and services for families, teachers, adults, and community organizations throughout each year. The Museum also operates Tifft Nature Preserve in South Buffalo, a 264-acre urban wetland preserve on reclaimed former industrial land and seasonally sponsors archaeological exploration at the Hiscock Site in nearby Genesee County, NY, one of North America’s richest Ice Age sites.

The Buffalo Museum of Science opened in 1929 and houses the most complete collection of artifacts and specimens from the greater Niagara region. 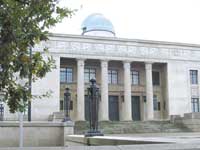 The museum's roots date back to 1836 when the Young Men's Association (YMA) was established. The YMA became the city's cultural center and soon began collecting fossils, various specimens, insects, shells and other items. Eventually, in 1861, the Buffalo Historical Society was formed to properly manage the now large collection of historical and natural history items. After being located in several locations the society moved into the current building in 1929, which would eventually become the Buffalo Museum of Science.

The museum is part of the Martin Luther King Jr. Park Historic District, which is a National Historic Landmark.