The Wilcox Female Institute is a historic Greek Revival-style school building in Camden, Alabama. The two-story brick structure was built between 1845 and 1850 as a boarding school for girls. The school closed in 1910 and the building was then used by the Wilcox County school system for over 50 years. It was acquired by the Wilcox Historical Society in 1976. The group made it into their official headquarters. It was placed on the National Register of Historic Places on April 3, 1975. 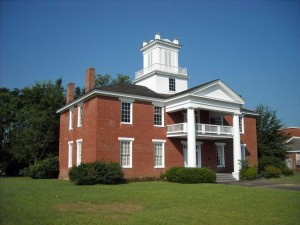 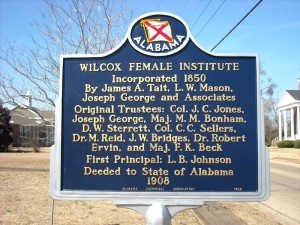 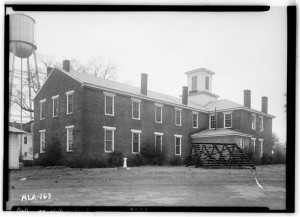 The school in Camden was built on the site of a block of brick stores now owned by Mrs. C. B. Jones’ heirs. Afterwards this school was closed and the Wilcox Female Institute was built and chartered. Later it was used as the county high school. This Institute was built according to authentic sources about 1845. Mr. James Asbury Tait, a distinguished citizen of Wilcox County, showed great interest in the erection of the building. The bricks were made by slave labor. The wealthy planters of this section subscribed money for the erection of the building so that their daughters might enjoy the privileges of a boarding school nearer home, instead of sending them to Virginia or the Carolinas. In 1850 the Wilcox Female Institute was incorporated. It was one of the first schools of its kind in the South.

From the beginning it was a chartered female college. Professor Jackson was one of the early instructors. A great deal of attention was given to languages and mathematics. English was taught to a great degree of perfection and letter writing and composition were perfected as a an art. The Reverend John Miller, an Associate Reformed Presbyterian minister bought the building in 1855, and was the president of the Wilcox Female Institute, assisted by an able faculty of teachers. Reverend Miller left the building to his two daughters, Mrs. Sallie Miller Brice and Mrs. Janie Miller Dale. They sold the building later to the state for a high school building. It was used as a gymnasium and recreation rooms in connection with the new high school building.

The building stands at the corner of Broad and Fail Streets, and is one of the favorite landmarks in Camden. The building is now the home of the Wilcox Historical Society. It is used as a small museum and as a site of various club meetings and receptions.