The fourth Spanish mission established in California, San Gabriel Arcangel was founded in 1771--only a few years before the American Revolution broke out on the other side of the continent. Two Franciscan friars and ten soldiers set out from the Spanish settlement in San Diego with instructions to raise their cross "forty leagues" north. The original site, in present-day Montebello, was destroyed by flood five years after its founding, causing the current location to be selected in 1776. The mission flourished until 1834, when Franciscan lands were secularized and sold to friends of Mexican Governor Pio Pico. In 1908, the remaining establishment was placed back in the care of the Catholic church. Today the mission, which played a crucial role in the development of Los Angeles, welcomes visitors to the church, museum, and grounds, the latter of which offer views of extensive ruins.

The mission in 1856, in a drawing by Henry Miller, who produced one of the most comprehensive collections depicting the California missions before the age of photography. UC Berkeley, Bancroft Library. 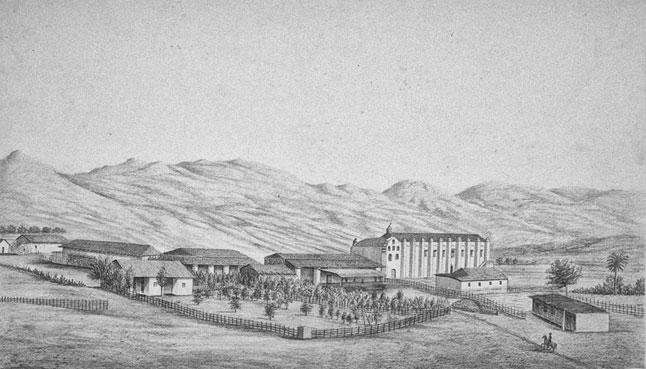 Arcangel's campanario or "bell wall" circa 1900. One of the massive bells was forged in Mexico City and weighs over a ton. The original 3-bell campanario was destroyed in the 1812 earthquake. 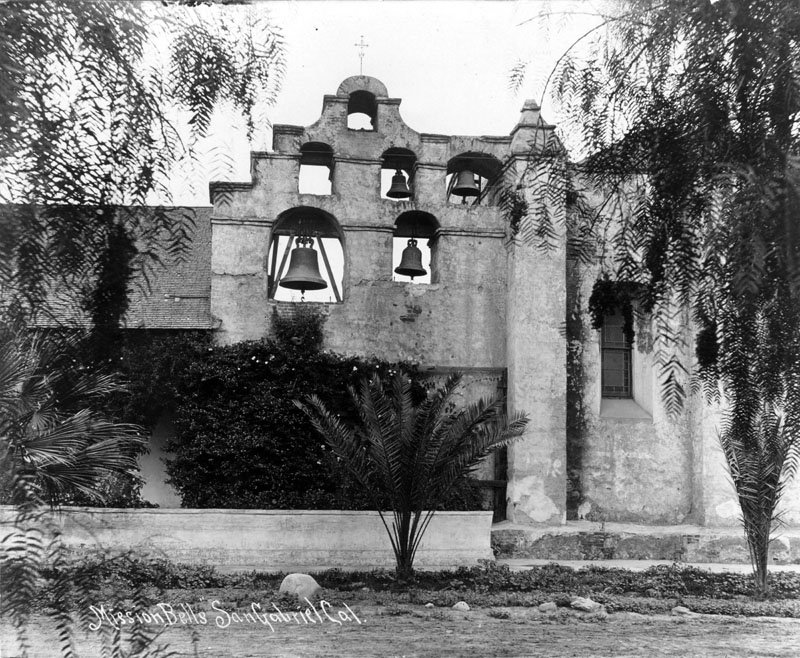 West end and southern facade in the late 1800s. The writing on the wooden fence in foreground are handwritten advertisements from local merchants. Courtesy of Water and Power Associates. 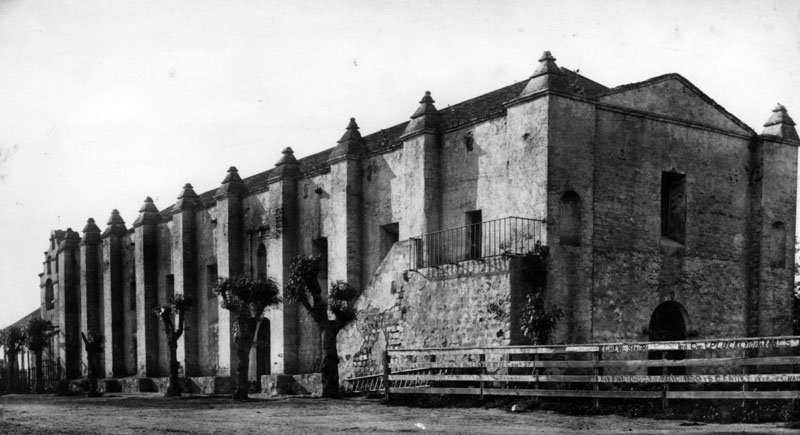 Elevation drawings of the mission by the U.S. Department of the Interior, noting in several places which portions of the structure are original and which have been rebuilt. 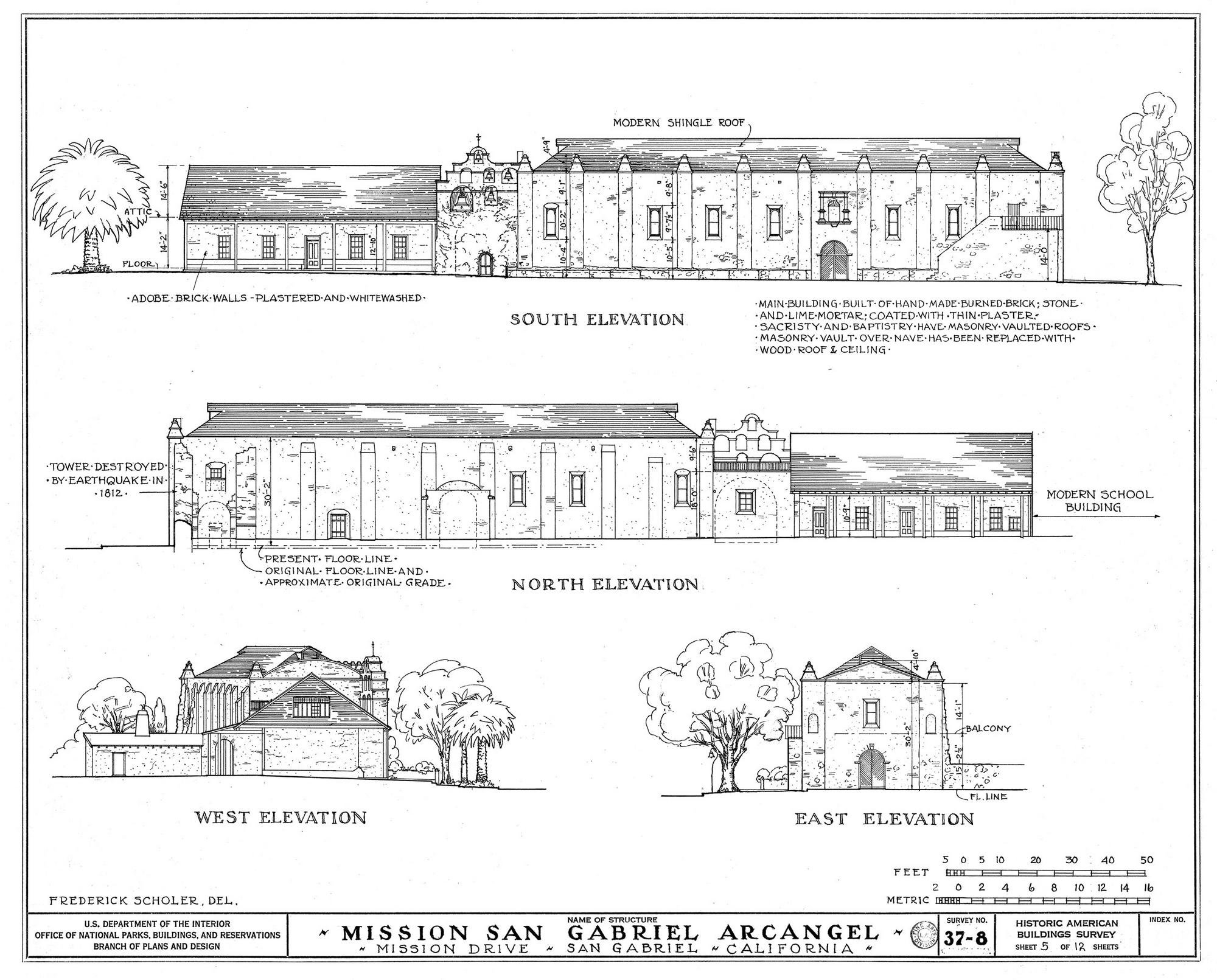 Architectural drawing of the belltower (campanario) by the U.S. Department of the Interior. Campanarios were featured in every mission, just as in most Catholic churches of the era. 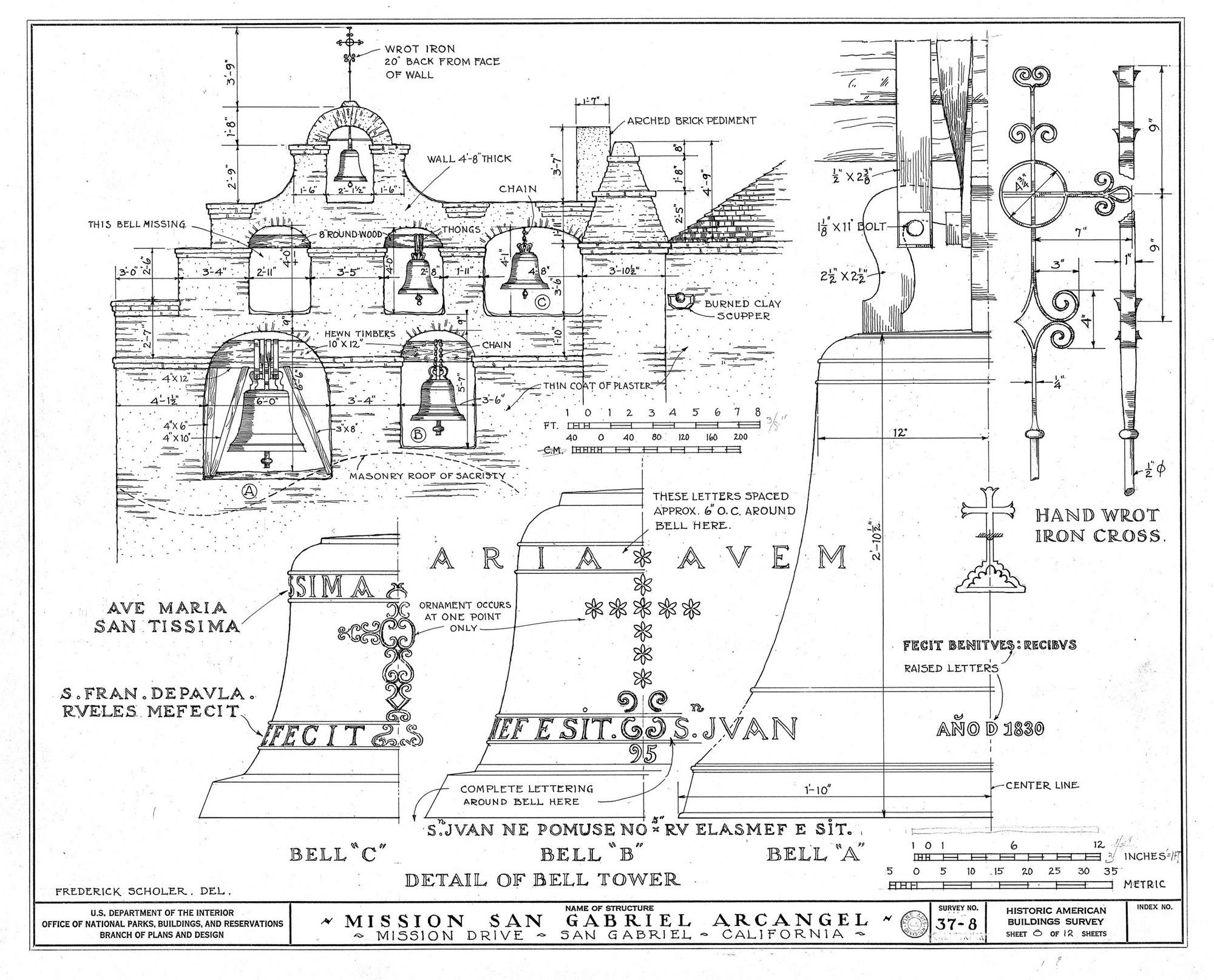 A modern painting of the mission from the 1800s. Arcangel's architecture was unique among missions, having heavy Moorish influences from its designer Father Antonio Cruzado, who was from Cordoba, Spain. Santa Barbara Mission Archive. 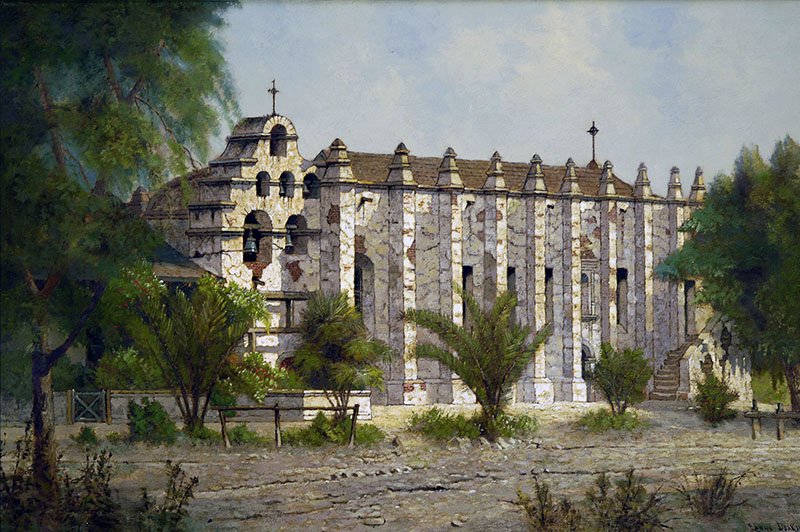 Arcangel circa 1870. The unpaved road at left is El Camino Real (the King's Road"), the 600-mile trail that connected all 21 missions, and California's first major overland commerce route. 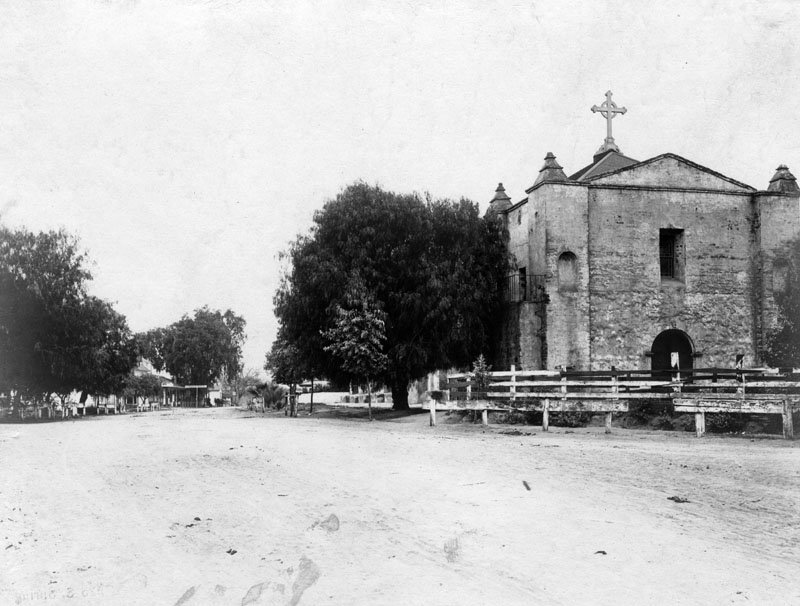 A map of the Spanish missions and ranchos in the Los Angeles. Note the many modern place names that correspond to the original Spanish and Mexican land grants. 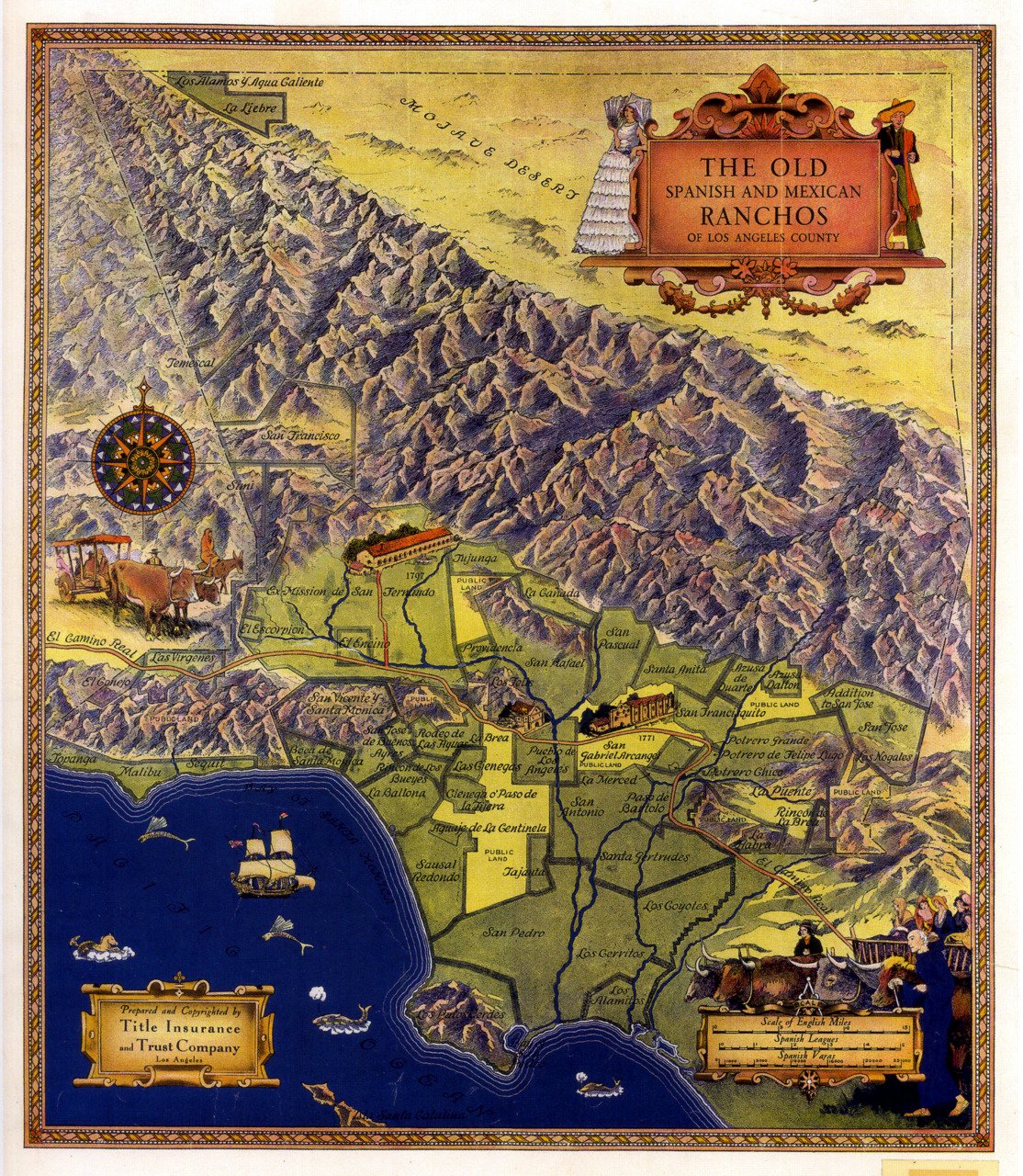 Famed explorer Jedediah Smith and his party arrive at San Gabriel Arcangel in 1826, the first Anglo-American explorers to travel to California overland across the Rocky Mountains. Courtesy of AAA Club of Southern California. 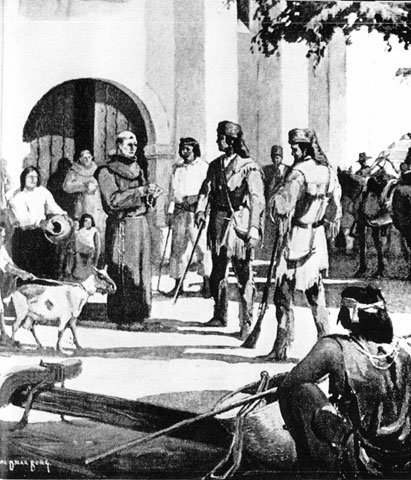 Friars converted thousands of Tongva and Gabrielino natives, largely responsible for the hard labor of the missions. Sometimes violent clashes occured, like a "massacre" of 50 Spaniards on the Colorado River in 1780. Santa Barbara Audubon Society. 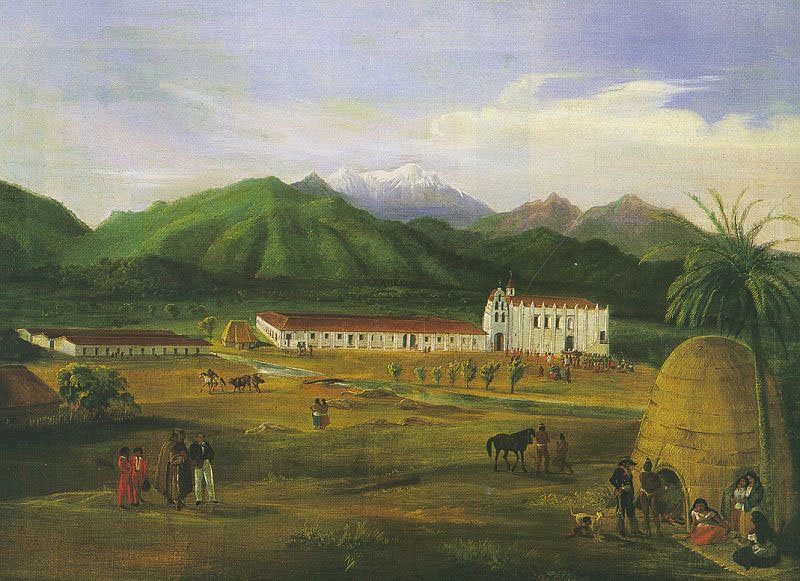 Having first established missions in San Diego and farther north near Monterey, it now remained for Father Junipero Serra and his Franciscan friars to establish a land route between the two fledgling communities--while pacifying and Christianizing the land and natives between for the Catholic church and Spanish crown. To that end, Fathers Angel Somera and Pedro Cambon were sent northward and commanded to establish a mission at a distance of "forty leagues," or approximately 120 miles from San Diego. Setting out on August 6, 1771, they founded the new mission near present-day Los Angeles on September 8.

The mission began to flourish and would eventually baptize thousands of California's Native Americans, peaking at a population of 1,700 in 1817. Much of this success was due to its position on the Rio Hondo on a fertile floodplain well-suited to crops, where a large community of converts (known as neophytes) could be sustained. Additionally, a much sought-after overland route was finally "discovered" by Spanish soldier-explorer Juan Bautista de Anza from his base in Tubac, Sonora in Mexico to the newly unlocked territories in Alta California. Crossing the difficult mountains and desert that had hitherto denied passage to the Spanish, Anza was guided in 1774 by a Baja Indian named Sebastien Tarabal, who had made his way home to Sonora from San Gabriel Arcangel. Once this overland route was established, most traffic from Spanish Mexico flowed directly to San Gabriel Arcangel and from thence out to the rest of Alta California. This secured a prominent place for Arcangel in the development of the mission network.

Two years later, however, floods along the Rio Hondo severely damaged the mission, and the Franciscans were forced to move to higher ground. Closer to the foot of the San Gabriel Mountains, three miles from the original site Arcangel found its new home, where it survives to this day. The soil was no less fertile there than at the abandoned location, allowing the Spanish (with most of the labor performed by Indian neophytes of the Gabrielino and Tongva peoples ) to cultivate large vineyards, olive groves, and orchards of orange, fig, and pear trees. A foundational principle of the mission system was that each would be a self-sustaining settlement, and in this San Gabriel Arcangel succeeded grandly. Hundreds of acres of agricultural foodstuffs were guarded against wild animals and wandering livestock by a huge cactus hedge, remnants of which could still be seen into the 1950s.

The mission lacked a permanent church for more than two decades, but the foundations were finally laid in 1791 and its structure, complete with 4-1/2-foot thick walls, was completed in 1796. Unfortunately, its roof collapsed in an earthquake a few years later, and the entire structure was further damaged in an 1812 earthquake (in which a number of the missions suffered badly). Despite these setbacks, San Gabriel Arcangel prospered, exceeding its brethren in agricultural products and second only to Mission San Antonio de Padua in Christianizing native converts. It was soon surrounded by several large ranchos (cattle ranches owned by Spanish, and later Mexican citizens) and served as the spiritual and cultural center of the blossoming pueblo of Los Angeles. In 1830, a 99-ton schooner christened Guadalupe was built at the mission, disassembled, and transported to the harbor in San Pedro where it was launched--the first European ship built in California with native materials. The vessel carried trade goods to Mexican ports. The anchor resides on the mission grounds.

Of the 21 missions, Arcangel was less affected by the overthrow of Spanish rule and assumption of Mexican independence. It could not help being dismantled by the 1834 secularization, however, which stripped the missions of their land. The Franciscan friars fled the mission in 1835, though they returned shortly thereafter. Just before the American invasion during the Mexican War of 1846-48, Californio Governor Pio Pico seemed on the brink of selling even Arcangel's structures to private citizens--and was stopped by the timely arrival of American forces. The pueblo of Los Angeles changed hands between American forces and Californio militia more than once during the war, culminating in the final decisive Battles of Rio San Gabriel and La Mesa on January 8 and 9, 1847. The resulting American victories, one of which was won on the banks of the San Gabriel River less than ten miles from Mission San Gabriel Arcangel (and even closer to the mission's original site), were the last battles of the war fought in California. The territory was soon ceded to the United States.

In 1859, the U.S. government returned the mission to the Catholic church and by 1908 it was under the care of friars of the Claretian order. Extensive repairs were carried out the structure throughout the century, including structural reinforcements carried out in 1993 due to an earthquake in 1987. The mission church, garden, and grounds are open to the public and tours are available. The grounds feature extensive ruins of the old mission complex, including a candle and soap factory and aqueduct which brought water to the mission from nearby Wilson Lake.