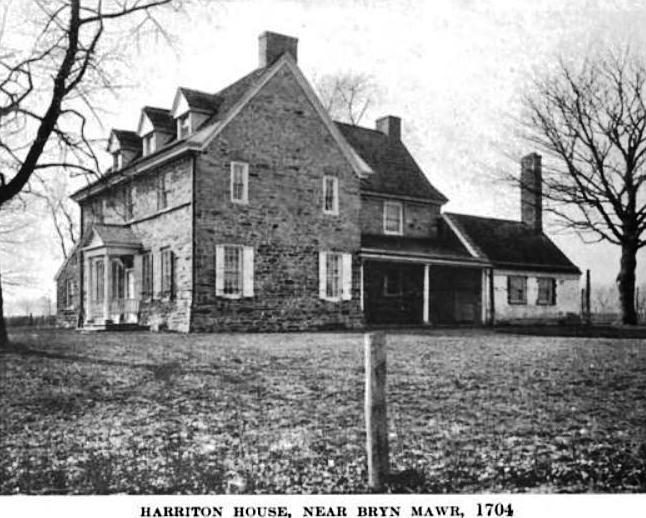 The Harriton House received its modern name after Rowland Ellis sold the farm to Richard Harrison in 1719.  Despite Ellis' intense involvement in the local community, the farm on the estate of Bryn Mawr was little more than a subsistence farm.  According to letters written by Ellis himself, he was farming only 15 of the 700 acres of the estate as the 1600s drew to a close.  The land Ellis did farm persists as a local park that is still maintained as of the creation of this entry.
Richard Harrison, upon purchase of the Bryn Mawr estate, changed the name to reflect his family's name, and the name became permanent.  Harrison was himself a Quaker and had sought out the estate as an ideal location to continue the cultivation of tobacco, which he had met some success with previously in the state of Maryland.  The climate of Bryn Mawr is remarkably friendly to tobacco cultivation, and Harrison's expertise brought success to the plantation until his death on the 2nd of March, 1745.
Harrison's success was built upon his import of slavery to Harriton, which was an understandably controversial decision among the local community and the state of Pennsylvania.  According to the Harriton Association, there is reason to believe that the Harriton Estate was the northernmost plantation to operate on the enslavement of Black Americans.
In 1774, Hannah Harrison, daughter of Richard Harrison, married Charles Thomson who came to manage the Harriton Estate after their marriage.  Thomson was by far the most well-known occupant, largely because of his involvement in the politics leading up to the American Revolution.  Thomson was the first Secretary to the Continental Congresses, a position that ceased to exist following his retirement and the reorganization of the government of the fledgling United States.
During his tenure as Secretary, he designed the Great Seal of the United States which is still used on all official government documents to this day.  He also was the man responsible for traveling to Mt. Vernon, the home of George Washington, to inform him of his election as President of the United States in the year of 1789.
Charles Thompson was a staunch abolitionist and did not carry on the use of slavery at Harriton Estate, instead choosing to employ paid laborers and offer shares in the Estate to his workers.  He was known for arguing that "slavery is like a cancer on this great new country" and believing that the persistence of slavery as an institution would lead to bloodshed if it was not resolved by religious, philosophical, and political leaders.  He devoted himself to the management of the estate in 1789, after 15 years of service to the United States as Secretary to the Continental and Confederation Congresses.  In working the farmland, he found great interest in scientific agriculture, which led him to help found the Philadelphia Society for Promoting Agriculture which now represents the oldest surviving agricultural organization in the entirety of the United States.
In the early 1900s, the Harriton Estate became the site of the Harriton Guernsey Dairy, which was, according to the Harriton House Association, owned and operated by Harrison family members descended from Hannah Thompson's (Harrison) brother.  The dairy farm succeeded and pedigree descendants of the Glenwood Guernsey cattle bred on the farm are still milked on farms to this day.
In the present day, the Harriton House Association has worked diligently to restore the house to its appearance as of the time of Charles Thompson's residency.  In addition to items owned by Charles Thompson, the Harriton House also features a number of other 18th century antiques and works of art.  On the land, the Harriton House Association maintains an apiary, community garden, and a strictly decorative plot of cultivated tobacco as well as a number of farm animals who occupy one of the barns on the surrounding land.  The stone barn has been converted to serve as an educational center.
The Harriton House Association, in addition to tours, offers various levels of membership donation tiers that allow interested parties to participate and contribute to the preservation of the site and the further research of Bryn Mawr's history.

Harriton Cemetery. LowerMerionHistory.org. Updated Dec. 2002. Accessed 01/20/18. http://www.lowermerionhistory.org/burial/harriton/. Source of information on the Harrison family members and others who were buried on the site. Source of Richard Harrison's date of passing.

Wednesday through Saturday, from 10:00am to 4:00pm by appointment Entry costs $5, free with student ID