Winterville Mounds, named for a nearby community, is the site of a prehistoric ceremonial center built by a Native American civilization that thrived from about A.D. 1000 to 1450. The mounds, part of the Winterville society's religious system, were the site of sacred structures and ceremonies. Archaeological evidence indicates that the Winterville people lived away from the mound center on family farms in scattered settlement districts throughout the Yazoo-Mississippi River Delta basin. Only a few of the highest-ranking tribal officials lived at the mound center. 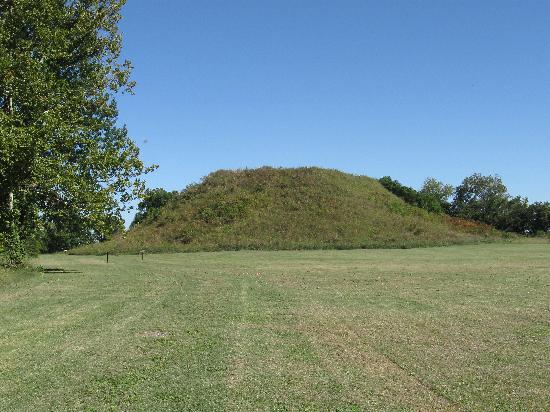 Winterville Mounds
The Winterville ceremonial center originally contained at least twenty-three mounds. Some of the mounds located outside the park boundaries have been leveled by highway construction and farming. Twelve of the site's largest mounds, including the 55-foot-high Temple Mound, are currently the focus of a long-range preservation plan being developed by the Mississippi Department of Archives and History and the University of Mississippi's Center for Archaeological Research.
Archaeological evidence indicates that the Indians who used the Winterville Mounds may have had a civilization similar to that of the Natchez Indians, a Mississippi tribe documented by French explorers and settlers in the early 1700s. The Natchez Indians' society was divided into upper and lower ranks, with a person's social rank determined by heredity through the female line. The chief and other tribal officials inherited their positions as members of the royal family. The elaborate leadership network made mound building by a civilian labor force possible.
A great fire during the late 1300s consumed the original building on the Temple Mound at Winterville. According to archaeological evidence, the cause of the fire remains a mystery. The site continued to be used afterwards, but no more mounds were built or maintained. Even though the site continued to be occupied after the fire, the general population declined at Winterville while increasing at settlements and mound sites 50 miles to the south, in the lower Yazoo River basin. By 1450 A.D. the Winterville Mound site appears to have been abandoned completely.
Archaeological Investigations
During the late nineteenth and early twentieth centuries, relic collectors occasionally visited the site, although few artifacts were discovered. The National Park Service and Harvard University's Lower Mississippi Survey conducted the first modern archaeological studies at Winterville in the 1940s. Lower Mississippi Survey archaeologist Jeffrey P. Brain directed extensive excavations at Winterville in 1967. His final report, Winterville: Late Prehistoric Culture Contact in the Lower Mississippi Valley, was published in 1989 by the Mississippi Department of Archives and History.
Preservation of the Site
In 1939, the Greenville Garden Club led a community effort to purchase forty-two acres of the Winterville Mounds site and to convey the property to the City of Greenville. Supported by the Winterville Mounds Association, the Mississippi Department of Wildlife, Fisheries, and Parks (formerly the Mississippi Park Commission) operated Winterville as a state park from 1960 until 2000, when the property was conveyed to the Mississippi Department of Archives and History. In 1993, Winterville Mounds was designated a National Historic Landmark.
Visiting the Site
Winterville Mounds, an official state historic site listed on the National Register of Historic Places, is maintained by the Historic Properties Division of the Mississippi Department of Archives and History.
It is located on Mississippi Highway 1, six miles north of the intersection of Highways 82 & 1 in Greenville, Mississippi. The grounds are open daily from dawn to dusk. The museum is open from 9:00 a.m. to 5:00 p.m. Monday through Saturday and 1:30 p.m. to 5:00 p.m. on Sunday. Admission is free.