Amzie Moore was a prominent civil rights leader in the Delta beginning in the 1940s. Moore built the house in 1941, the first brick home owned by an African American in Cleveland. Moore is often referred to as a “civil rights giant.” In 1950, he founded the Regional Council of Negro Leadership (RCNL). The RNCL hosted public meetings where prominent speakers, including Thurgood Marshall, addressed Delta audiences. RCNL also held voter registration classes, including some in Moore’s home. Along with Herman Perry, Moore started the Bolivar County Voters League. He served as the first president of the Cleveland NAACP chapter as well Vice-President of the State Conference of the NAACP. 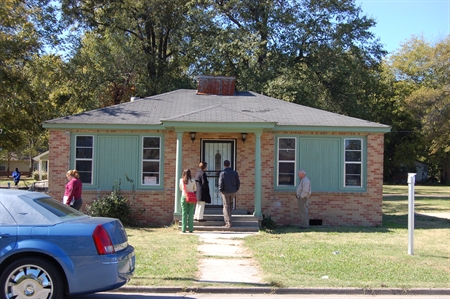