The monument to Timothy Ahearn was commissioned by members of the Maple Athletic Club and the New Haven Chapter of the Yankee Division Veterans Association and was dedicated to their neighbor and fellow soldier, Timothy Francis Ahearn of Fair Haven. Ahearn was awarded both the Distinguished Service Cross and the Croix de Guerre for his actions at Verdun. He is also the only known New Haven soldier to have fought in every major battle of World War I, and was likely gassed. Although Ahearn survived the war, he died at age 25 far from home, and was buried in St. Lawrence Cemetery in West Haven, close to the location of this monument. The Timothy Ahearn Monument became the site for annual Seicheprey Day observances from the late 1930s until circa 1980, when the last doughboys of the 102nd died. 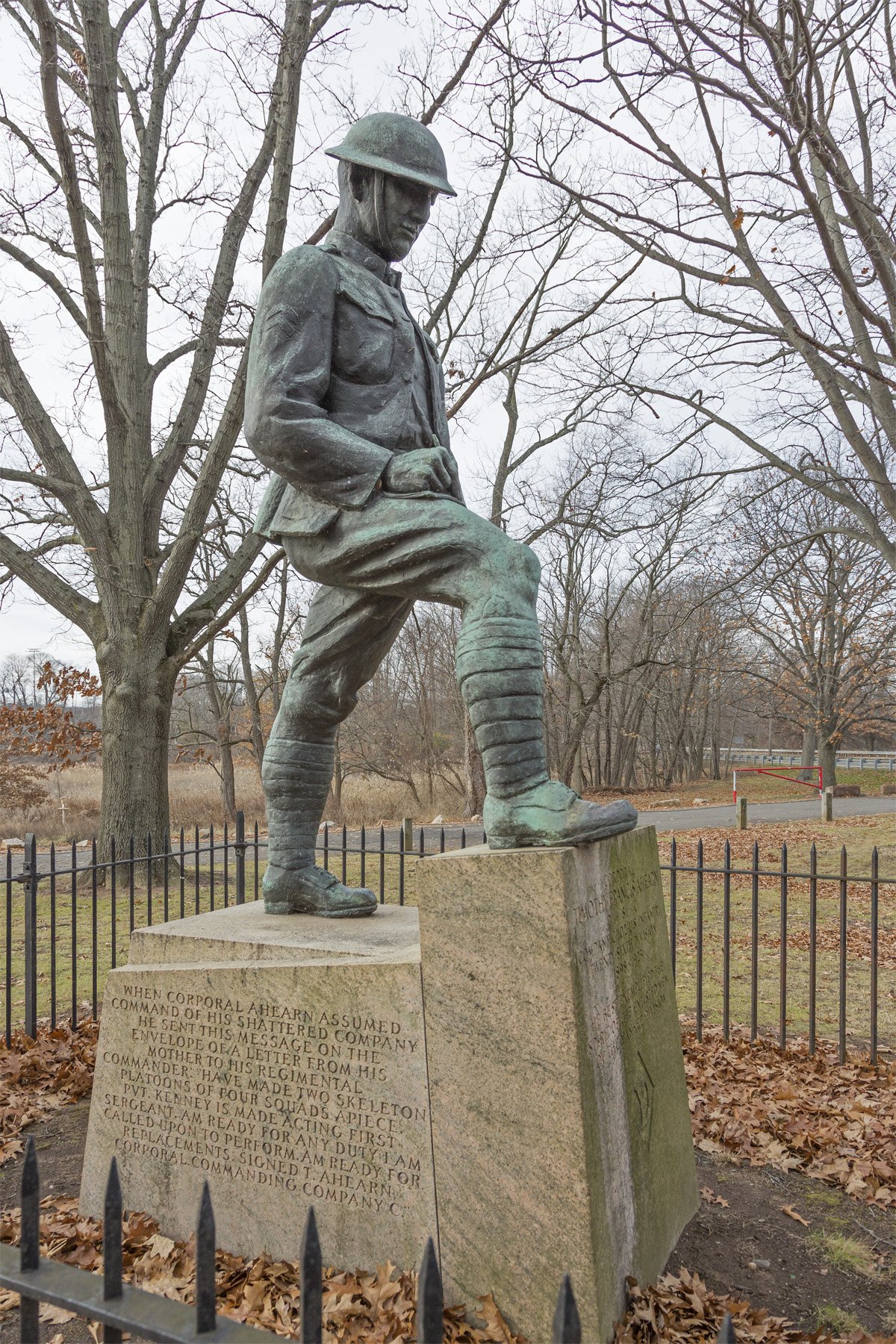 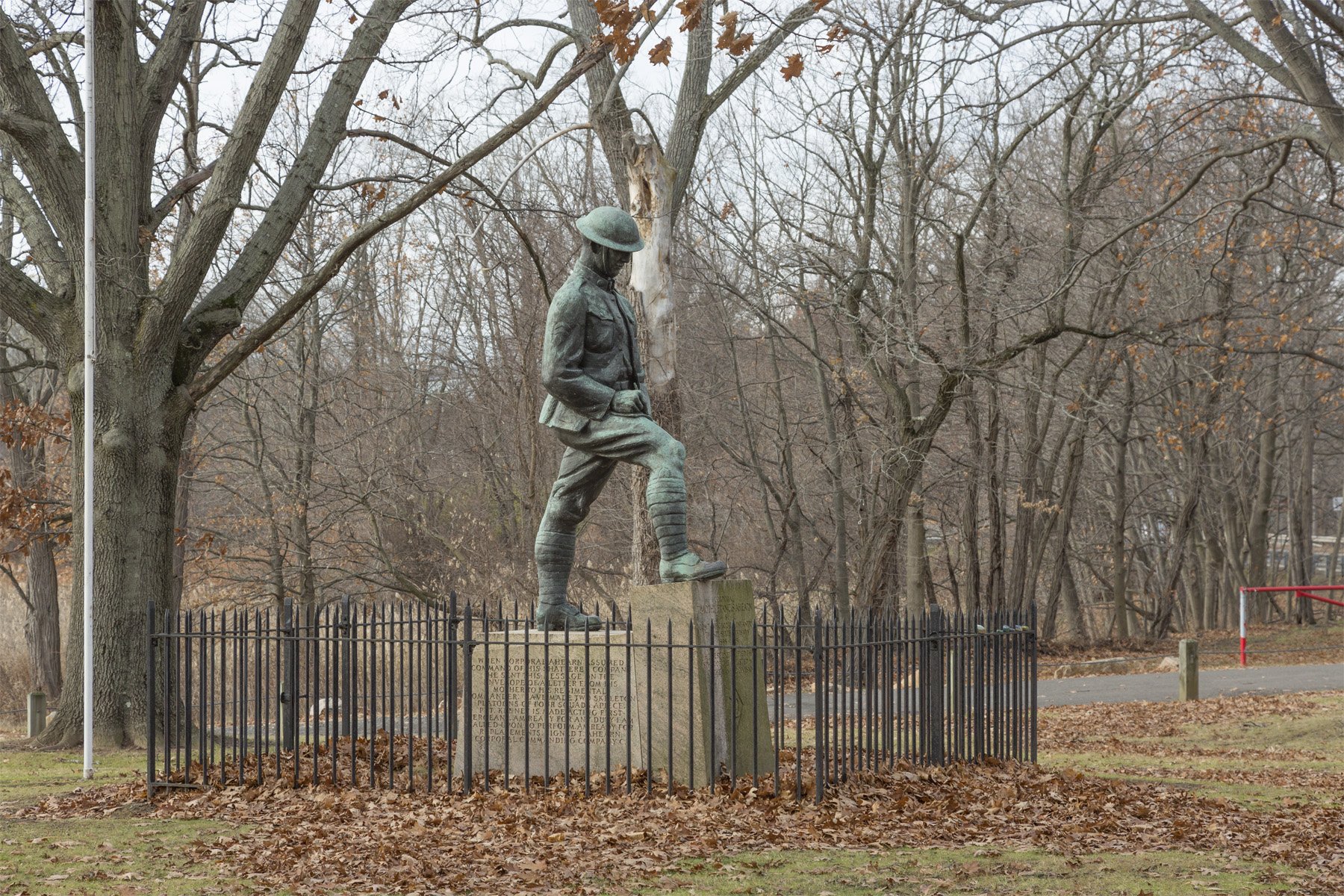 The New Haven Chapter of the Yankee Division Veterans Association were fortunate in their timing, as this monument became part of the Works Progress Administration (WPA) program, which matched an artist on the WPA rolls to projects with matching funding. Artist Frederick Lang of Darien, Connecticut was chosen for the commission and Maxwell & Pagano company installed the bronze once it was completed. A large parade and wreath laying ceremony were held for the monument's dedication in 1937.

The "YD Men" (Yankee Division) and the Maple Athletic Club chose to remember Ahearn in this monument, as his actions in France, according to General Clarence Edwards, "best exemplifies the spirit of the YD."  The Yankee Division had been formed in Boston, and the 102nd Regiment, pulled from the Connecticut 1st and 2nd National Guard, formed during the summer of 1917. Their training grounds were located on the west side of New Haven, on land donated by Yale University--hence the site was called "Camp Yale." Here, Timothy Ahearn and many friends and neighbors from Fair Haven (a heavily Irish section of New Haven), as well as other doughboys from around New Haven and the State of Connecticut, prepared to enter the Western Front in late 1917. The 102nd Regiment became one of the first American regiments to land in France, and also one of the first regiments to fight without direct French Army support.

The defining event for the 102nd Regiment was the Battle of Seicheprey, which occurred on April 20, 1918, in a "quiet" sector of World War I. The Germans--called the "Boche"--attacked the small village of Seicheprey unexpectedly in the early morning hours, and the Americans, very green as compared to the seasoned European armies, fought hard. By the end of the day, hundreds of doughboys had been killed or taken hostage. The 102nd was decimated, but, went on to participate on the front lines in every major battle afterward due to the influx of American soldiers from across the United States into the regiment.

After the Armistice in November 1918, when the 102nd was back in New Haven, the anniversary of the Battle of Seicheprey became an annual day of observance. Although Timothy Ahearn was remembered for the Battle of Verdun, his monument became the site where New Haveners would gather--right up until around 1980, when the last doughboys had died--to remember Seicheprey and their service. Timothy Ahearn's neighbor and fellow doughboy, John Dillon, became the New Haven Veterans Division chapter president, and helped to commission several monuments to the 102nd Regiment, including this one, and another to A. Frederick Oberlin of Hamden, another doughboy who died early due to gas exposure.