The largest non-sectarian burial place in Yonkers, Oakland Cemetery traces its origins to 1866 when the Yonkers Cemetery Association was organized. This association established a large burial ground on the south side of Saint John's Cemetery. The Yonkers Cemetery Association struggled financially during its early years, and was reorganized as Oakland Cemetery in 1882. The cemetery, which now comprises about 50 acres, is the final resting place of many of Yonkers' most notable residents. 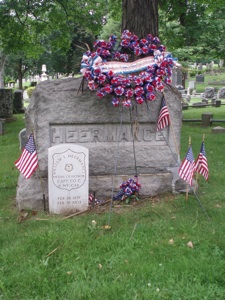 The largest non-sectarian burial place in Yonkers, Oakland Cemetery traces its origins back to 1866. At that time, Yonkers was growing rapidly, and its residents needed an appropriate place of burial for their family and friends. To meet this need, several city residents formed the Yonkers Cemetery Association on December 3, 1866. The following year the association acquired three farms next to Saint John's Cemetery from Leonard W. Jerome, the maternal grandfather of Winston Churchill, on which it established Yonkers Cemetery. The first burial in the new cemetery was made on September 2, 1867.

"From the valley of the Nepperhan the land rises gradually to the east, culminating in a considerably extensive plateau, covered with groves, containing some of the finest old forest-trees growing in this part of the State. The level ground is admirably adapted for burial-plots, while the hillside affords ready facilities for the construction of vaults and tombs. Abundant springs of water gush forth at several points among the rocks, which add much to the life of the ground....A receiving vault, built in the side of the hill, about a quarter of a mile back from the entrance, is of gray stone and cost about eight thousand dollars. The entrance to the cemetery is a particularly easy one, at the southwest corner of the grounds."

Visitors to the cemetery enter through iron gates that were constructed in 1867. To the left of the gates stands a structure, now connected as one building, that originally consisted of two separate structures: a chapel and an house for the cemetery overseer. Plans for these buildings were developed in 1871.

In 1927 Oakland Cemetery sold 14 acres of land to Westchester County for the construction of the Saw Mill River Parkway. The size of the cemetery -- 51 acres -- has not changed since that time. Oakland Cemetery is still a favored final resting place for the residents of Yonkers, and its grounds may be visited from 8:00 am - 4:00 pm daily.