Plaque honoring the July 21,1871 Massachusetts Agricultural College (M.A.C.) rowing team's winning crew in their upset victory against rivals Amherst, Bowdoin, Brown, and Harvard. "Here come the farmers" was among the winning refrains uttered by newspapers and the M.A.C. college president alike. In 1907 a Trophy Room was established in North College (no longer extant) where the relic of the shell was displayed, mostly likely with the "Winning Crew" plaque and "College Regatta" banner. By 1956 campus maps show North College slated for demolition and the plaque and other regalia would have been removed from the site prior to that date. 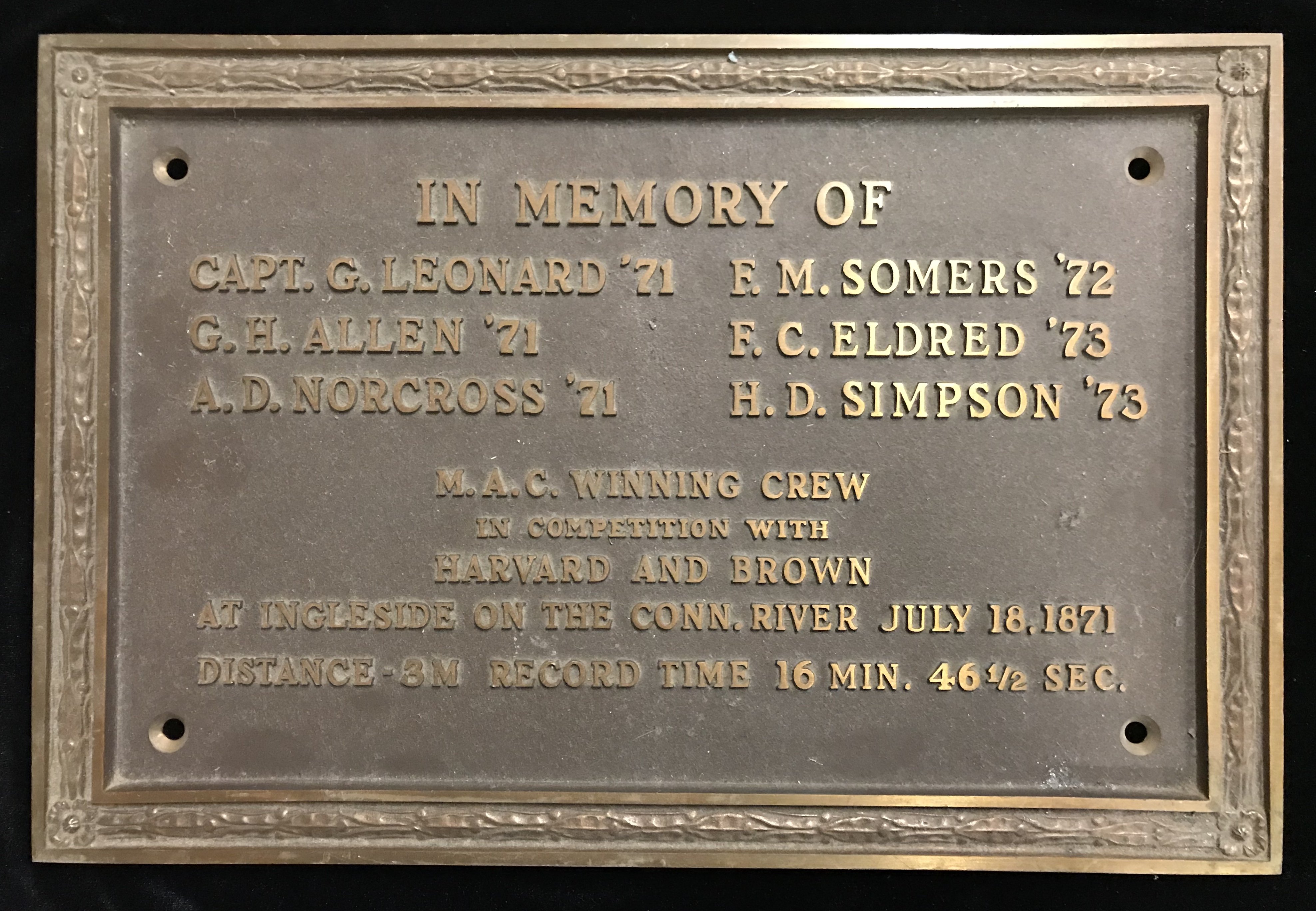 "From the Ingleside" relic of the winning shell, circa 1907 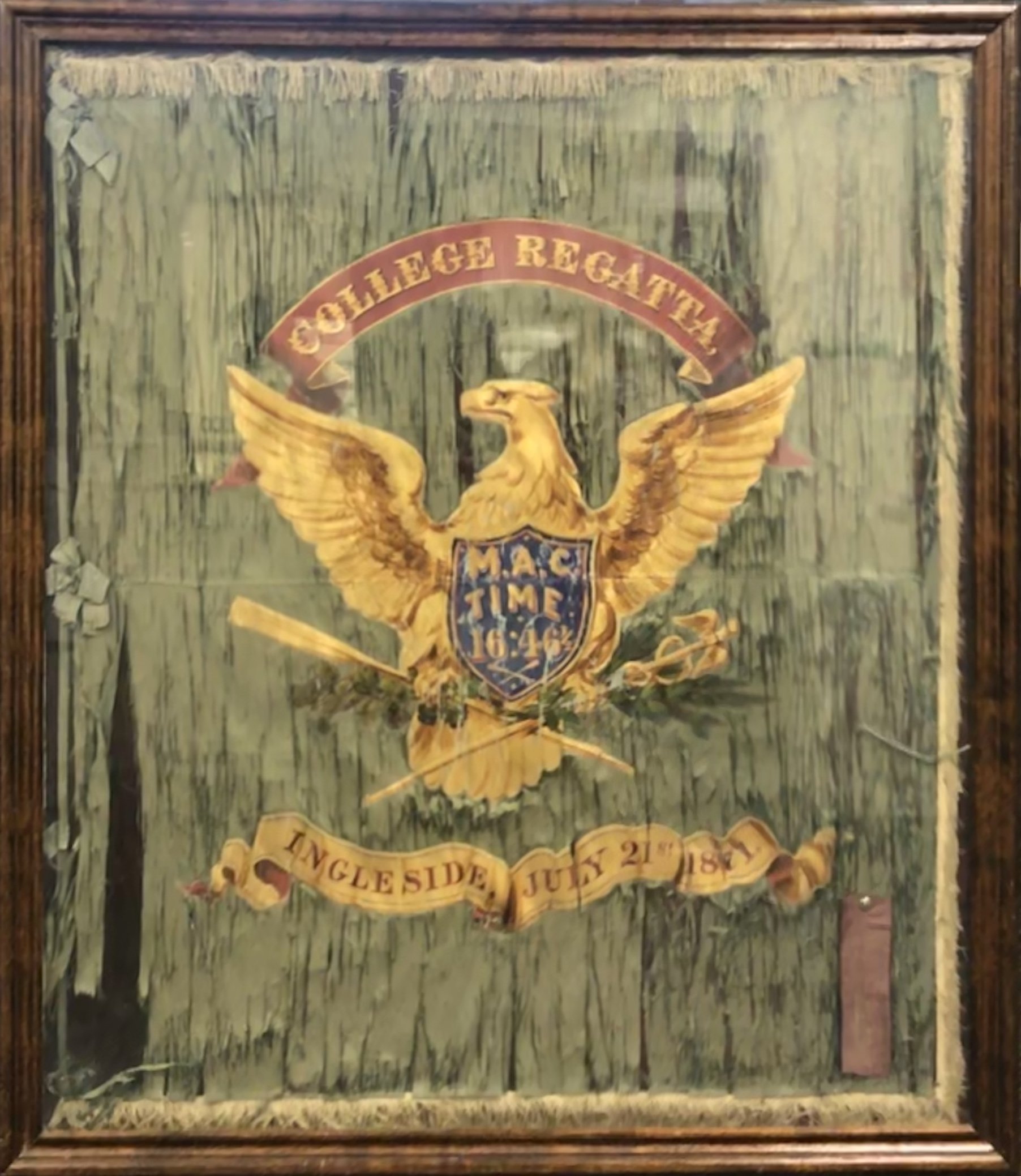 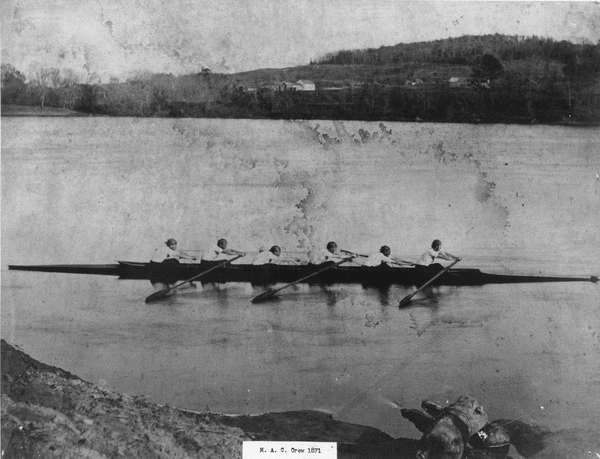 Account of the victory of the Massachusetts Agricultural College crew over Harvard, Yale, and Brown. 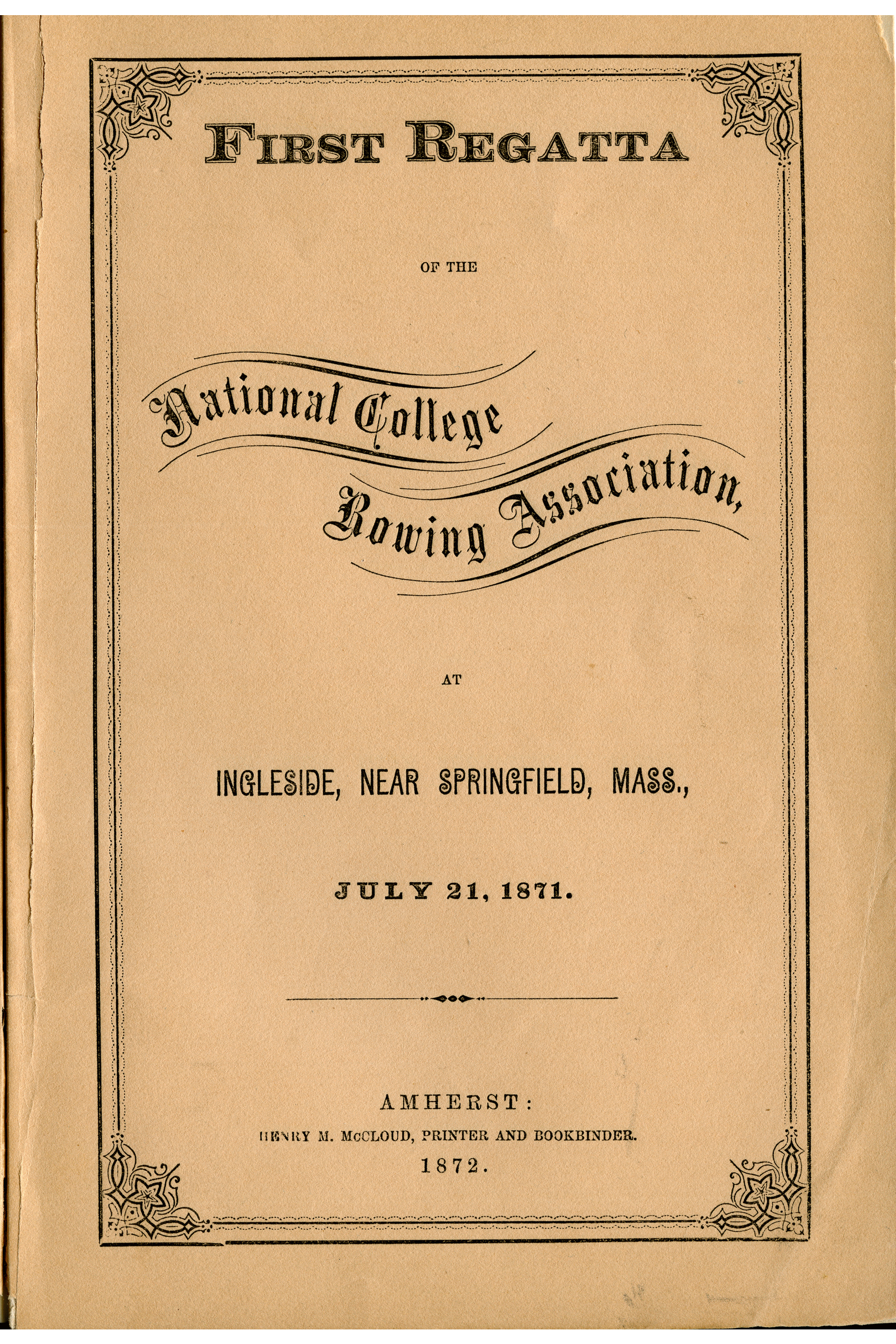 In 1870, the year before the first class graduated from the college, Massachusetts Agricultural College students formed a boating association, acquiring a Spanish cedar shell from a Springfield rowing club in which to practice. In their first and only race that year, they took on the newly established crew at Amherst College, winning a three mile race in the Connecticut River near Hatfield.

The following year, the MAC club joined the newly organized Rowing Association of American Colleges, along with Amherst, Bowdoin, Brown, and Harvard. Training on weights indoors until the weather improved and then running the three miles to the river to practice on the water, the team purchased a better shell from Amherst College and hired Josh Ward, one of five brothers from a renowned rowing family, as coach. Manned by Gideon H. Allen, George Leonard (bow and captain), and Arthur D. Norcross from the Pioneer Class of 1871; Frederick M. Somers (Class of 1872), and Henry B. Simpson (Class of 1873), the team entered the First Collegiate Regatta at Ingleside, near Springfield, on July 21, 1871, pulling off a shocking win against heavily favored Harvard, which lagged by fourteen lengths, and Brown, which followed by twenty. The MAC crew logged the fastest time on record for a six-oared crew, 16 min., 46.5 secs. for three miles.

Having witnessed the shocking upset, a jubilant President William Smith Clark splashed into the river to congratulate the crew personally and then rode back to campus at full speed to spread the news. The victory was viewed as enormously important for the new college, a vindication of sorts, and an affirmation that on an even field, the humble Aggies could stand up against and defeat their supposed social and intellectual superiors. A pamphlet that appeared shortly after the event captured both the pride in the Mass Aggie team and the class sensibilities involved:

We used to hear a theory elaborated a few years ago, when Harvard was beating Yale in race after race, that the victory in rowing was due quite as much to brain as to muscle. We were told that there was a great deal in blood, a great deal in breeding, and insinuation was that while Yale could show very good limbs, and sinews and backs that one might approve, she somewhere lacked a culture (nobody thought then that it was agriculture she lacked,) for want of which she must be inevitably be beaten. You see, blood will tell, said the sagacious theorists, and the college that has the most culture, that puts the most brain power into the stroke, is bound to win. But Harvard went on winning, and there was no way to disprove the theory...

But what shall we say now? Here come the Farmers, about whose culture we have heard nothing, whose blood is very likely red, who may not part their hair at all, who may never even have seen the Charles nor the Back Bay, and row right away from a boat full of Harvard brains. It is an audacious and revolutionary piece of business, and makes necessary a reconstruction of a good many theories... (First Regatta, p.24]

MAC students entered the next two Regattas in 1872 and 1873, losing to Amherst and Yale respectively, and the Boating Association continued until 1875, with college and class crews selected annually. One of the early shells used by the Association, probably the boat they purchased in 1870 and used until 1874, was rescued after being abandoned and placed as a trophy in the cases in the natural history room in South College until 1885, when that building burned, after which it was hung in the rafters of the Drill Hall, before finally being removed to the College's Trophy room in 1907. A fragment of the boat used in 1871 is housed in the University Archives.