At this location in the mid-19th century, New York's elite would gather at the Hamilton Club. Elizabeth and Reverend James Gloucester, African American real estate investors, purchased the five-story building shortly after they sold all of their property in Manhattan. With approximately $150,000, the couple purchased the Hamilton Club and renamed it Remsen House after the street where it was located. The Gloucesters turned the building into a boarding house with the top floor of their property serving as their family home. The couple held many meetings and dinners at the property and the other floors were rented to commercial enterprises.

Until the building was demolished in 1936, the Resmen House served as a meeting space and boarding house and was owned by Elizabeth Glucester, a leading African American resident. 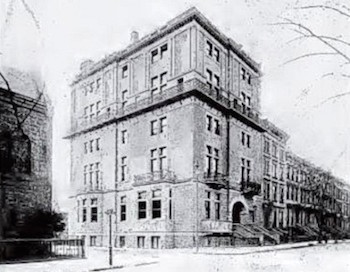 The Hamilton Club was originally an exclusive men’s club founded to provide a place for the city’s elite to gather to eat, drink, and discuss political and finical matters. In the 1860’s the club membership had expanded and would no longer be suitable for their meetings. In 1865 the building was sold to African American entrepreneur, Elizabeth Gloucester, and her husband, Reverend James Gloucester.

The Gloucesters were able to purchase the five-story building shortly after they sold all of their property in Manhattan. With approximately $150,000, they purchased the Hamilton Club and renamed it Remsen House after the street where it was located. The Gloucesters turned the top floor of their property into the family home where they frequently held meetings and dinners.

In 1878 the couple formally opened Remsen House as a boarding house, and the building became Elizabeth’s main occupation and source of income. She held meetings for the Freedman’s Friend Society, Union Soldier Associations, and the Ladies National Union Fair. She hosted family friend, Frederick Douglass, whenever he was in town. Prominent white residents of New York City and Brooklyn like Henry Ward Beecher and his sister, Harriet Beecher Stowe, also frequently held or attended meetings at the property.

At the time of Elizabeth’s death in 1883, the property had increased in value to about $300,000, which in today’s standards is about $7 million dollars. The property was divided among her husband and five surviving children. After the death of Rev. Gloucester in 1890, the couple’s daughters ran the property for a few more years and then eventually sold it back to the Hamilton Club. The Remsen House was demolished in 1936.