Built in 1935, the Duke Ellington Bridge carries Calvert Street NW over Rock Creek Park in Washington, D.C., connecting the neighborhoods of Woodley Park and Adams Morgan. It was originally called the Calvert Street Bridge until renamed in 1974 in honor of jazz musician Duke Ellington, who was born in Washington, D.C. The bridge’s construction was part of a larger local trend of replacing old iron-truss bridges with robust masonry structures. 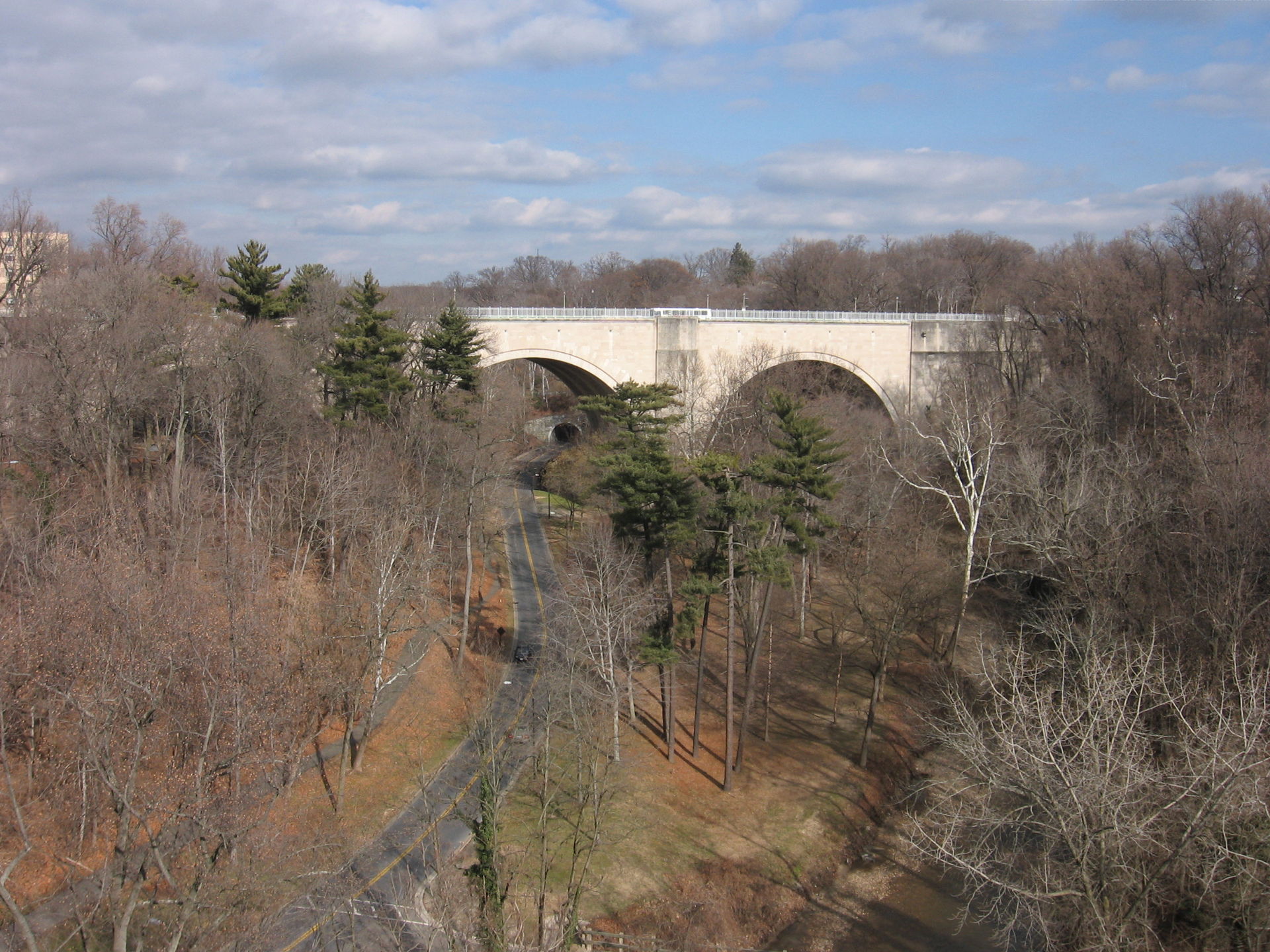 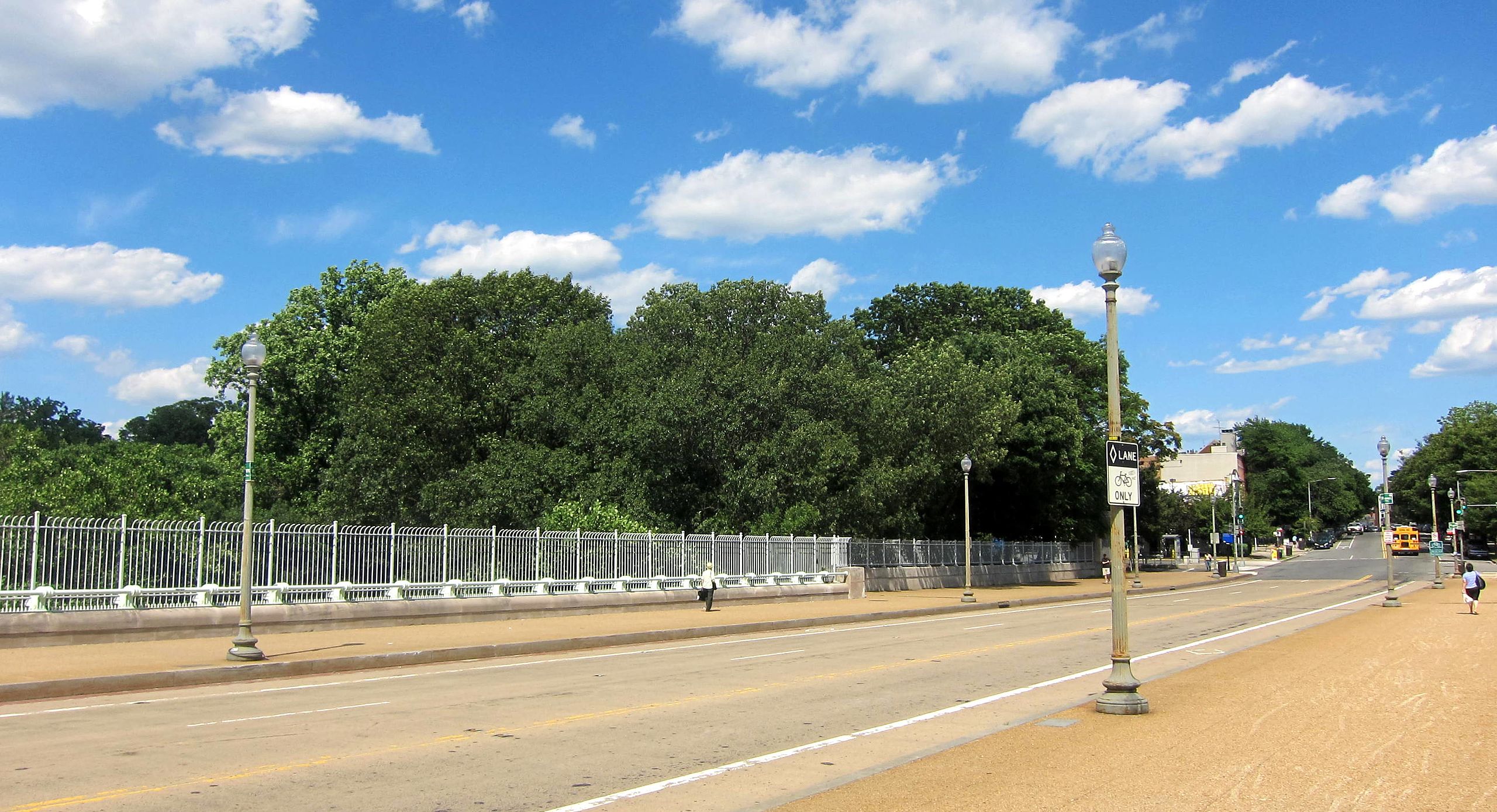 The 1891 bridge constructed for streetcars. Courtesy of the HABS report for the Duke Ellington Bridge. 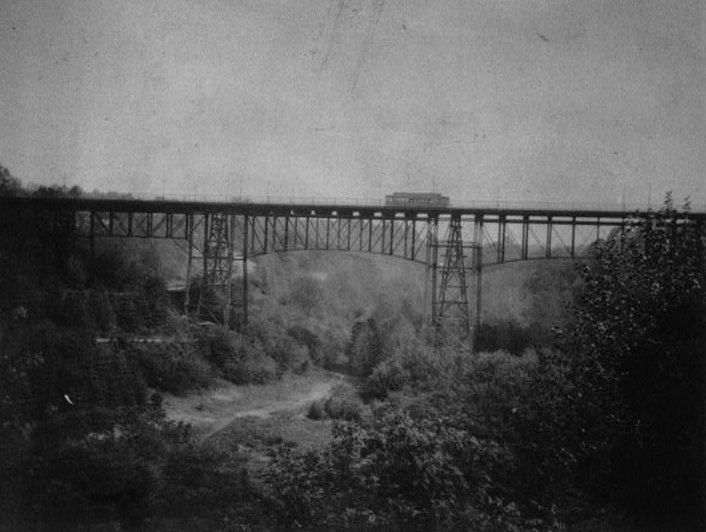 A view of the Duke Ellington Bridge from the Potomac Parkway tunnel, with the Taft Bridge in the distance. Courtesy of the HABS Report for the Rock Creek Parkway. 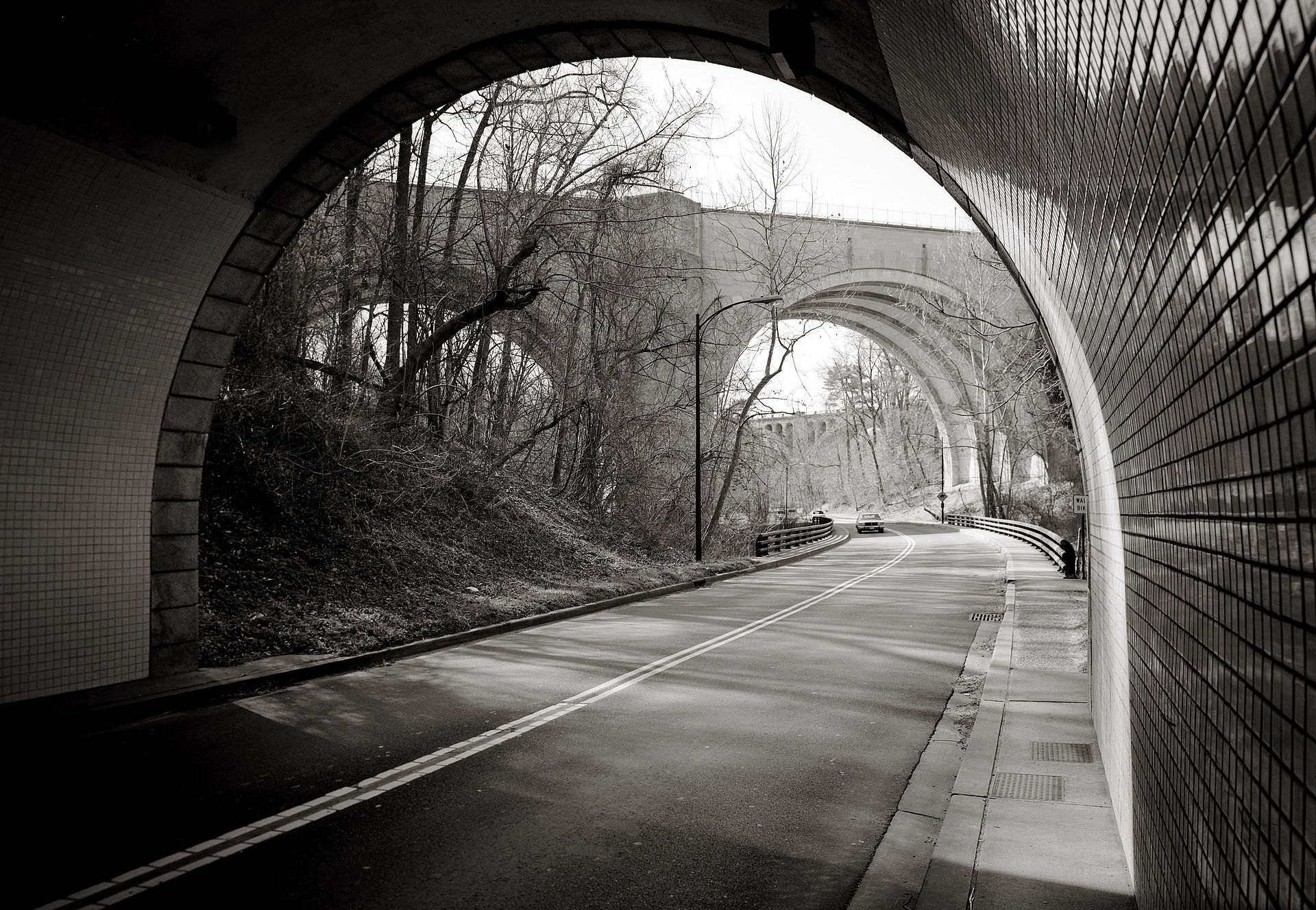 Jazz musician Duke Ellington, for whom the Bridge was named in 1974. Wikimedia Commons. 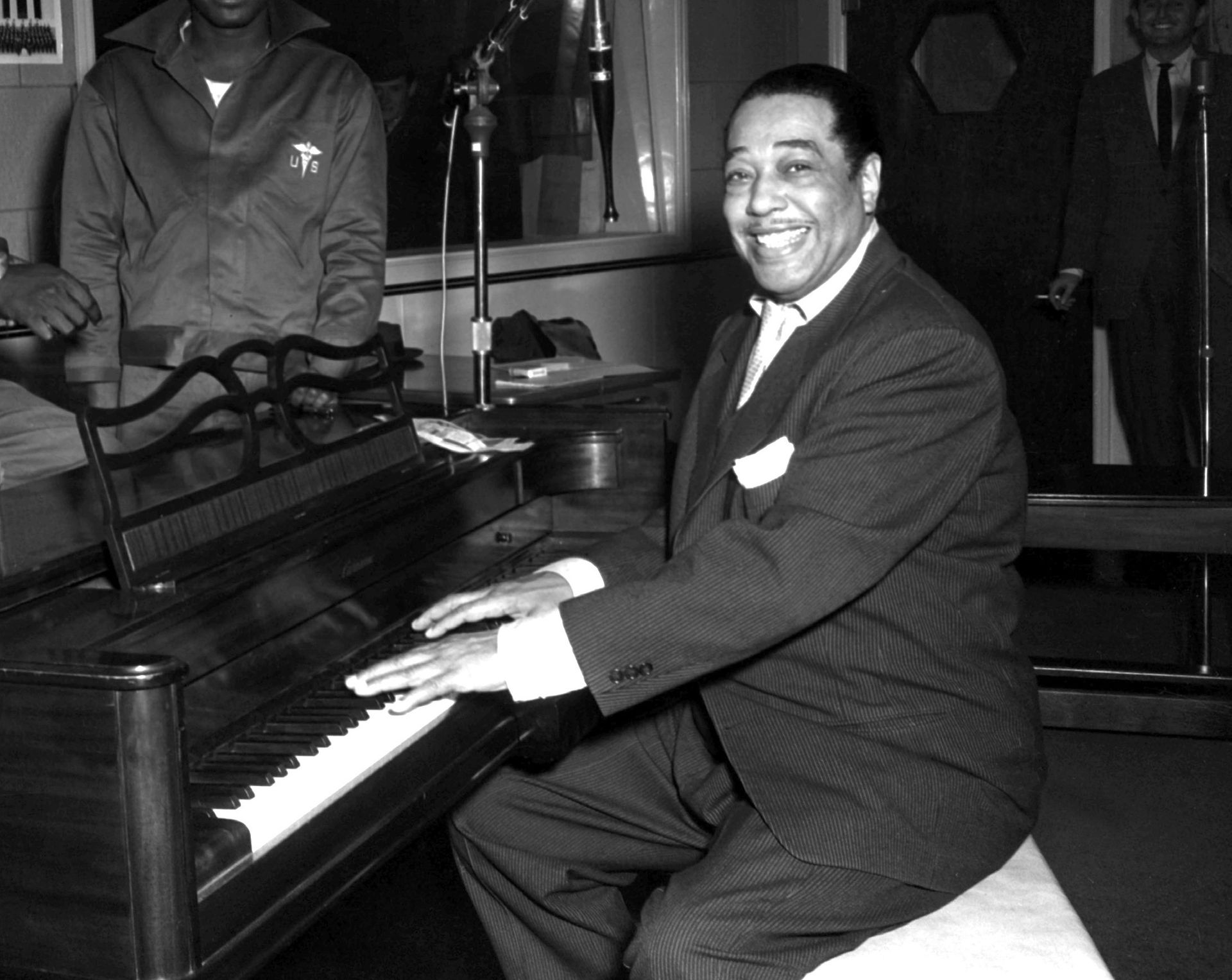 Plaque on the Duke Ellington Bridge honoring the musician, who was born in Washington, D.C. Wikimedia Commons. 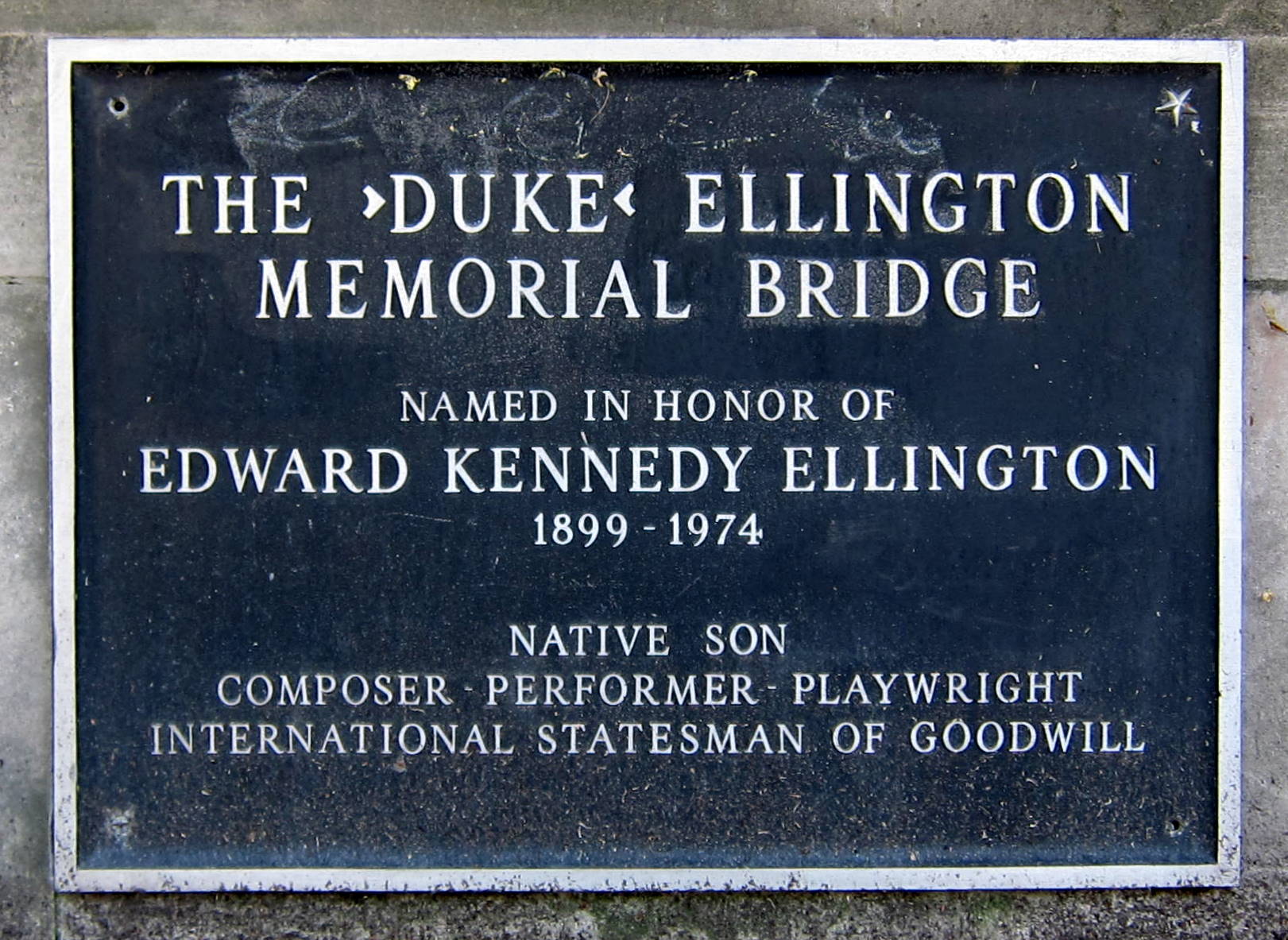 The Duke Ellington Bridge was the last of three major bridges in the Rock Creek area of Washington, D.C., constructed after the William Howard Taft Memorial Bridge in 1907 and Klingle Valley Bridge in 1931. Its design, both practically and aesthetically, was chosen in light of its grand predecessors. The Duke Ellington Bridge replaced an 1891 iron-truss bridge that carried streetcars over Rock Creek. The streetcar line, run by the Rock Creek Railway Company, helped develop northwest Washington in the late nineteenth century. Just as the Duke Ellington Bridge is an important route for cars and foot traffic today, the streetcar line made suburban transportation easier. The streetcar ran from Chevy Chase along Connecticut Avenue and Calvert Street on a 20-minute weekday schedule in winter and 12-minute schedule in summer, when locals and tourists visited Rock Creek Park, the National Zoo, and Chevy Chase Lake. By 1911, however, the Calvert Street bridge was already failing and needed reinforcement. It did not keep up with technological advancements and proved too narrow to carry both streetcars and automobiles. Furthermore, the city was using the 1901 McMillan Senate Park Commission Report to implement urban development plans and the Commission of Fine Arts (CFA) to oversee design. The Commission of Fine Arts, along with the District Commissioners, envisioned a new bridge that was practical and more attractive than existing structure, which was called “unsightly” by the Washington Board of Trade in 1923.

Beginning in the late nineteenth century, officials in Washington, D.C. were interested in upgrading the city’s bridges. It signaled a new, more sophisticated era of D.C. architecture and engineering and represented the city’s growth into the suburbs. The Taft Bridge, completed in 1907, was both a feat of engineering and aesthetically pleasing against the beauty of Rock Creek Park. In 1931, the old iron-truss viaduct crossing Klingle Valley was replaced with an art deco bridge, formally known as the Connecticut Avenue Bridge. The neighborhoods this bridge connected, Woodley Park and Cleveland Park, experienced rapid growth in the early twentieth century, especially with the construction of upper-class homes. These structures set a standard for engineering design in D.C.

The Calvert Street bridge went through multiple designs over the years. The first designs were proposed by architect George Oakley Totten, Jr. in 1917, though they proved too ornate and expensive. Totten proposed a simpler design composed of three large arches and two smaller ones, which was given preliminary approval by the CFA. Still, there was concern that the Calvert Street bridge design would deflect too much from the Klingle Valley bridge’s art deco design. The Klingle Valley Bridge architect, Paul Phillipe Cret, and engineers Modjeski, Masters & Chase, proposed their own designs in the early 1930s. The District Commissioners and CFA grappled with these designs for over a decade, as the existing Calvert Street Bridge fell into disrepair and neared collapse.

The District Commissioners and CFA had a lot to consider in terms of bridge design. What materials should be used? How many arches should the bridge have? Which design was the most attractive? Which was the most structurally sound? In 1933, they finally settled on a design by Paul Cret and Modjeski, Masters & Chase. The final design incorporated limestone-faced concrete and three arches. It complemented the Klingle Valley Bridge, which used exposed bronze as decoration or support under the arch.

The new Calvert Street Bridge was completed in 1935. It included hidden streetcar propulsion lines and public utilities like water and sewer lines. Sculptor Leon Hermant crafted four relief panels depicting railway, highway, air, and water transportation, which were placed on the abutments. While the bridge was under construction, engineers moved the iron-truss bridge as a detour for streetcar and automobile traffic, shifting the structure eighty feet downstream using rollers pulled by horses. It was then demolished once the new bridge was usable. The bridge underwent a few alternations over the years, such as expanding sidewalks. In the 1980s, suicide prevention fences were installed at the bridge to address a growing problem.

The Calvert Street Bridge was rededicated as the Duke Ellington Bridge in 1974. Born and raised in Washington, D.C., Ellington had an illustrious career as a jazz musician and composer whose work transcended the genres of swing, jazz, and art music.