In 1864 the Union controlled gunboat, the USS Columbine was sent up the river to support infantry. The Confederate commander John Dickison set up an ambush at Horse Landing. Once the boat got in range, Dickison's men opened fire on the vessel and disabled it. Once aboard the Columbine, Confederate forces captured the supplies and destroyed the vessel. 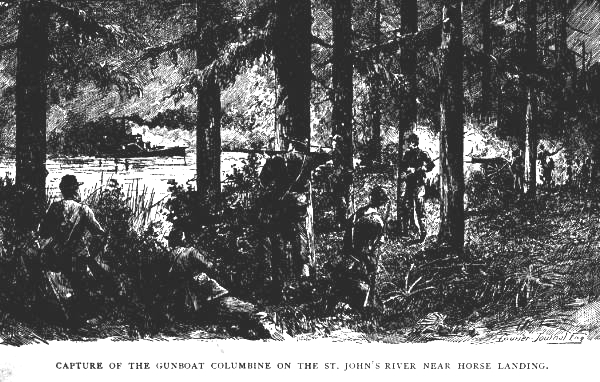 This marker was created largely through the efforts of historical reenactors. and the Florida Confederation for the Preservation of Historic Sites.

Captain John Dickison was the commander of Company H of the Second Florida Cavalry. This unit performed many successful raids leading up to The Battle of Horse Landing. The planning for this attack started when Confederate spy named Lola Sanchez told Dickison that she overheard Union officers talking about a surprise attack on Confederate troops.

Lola Sanchez became a Confederate spy after her father was falsely accused of being a spy. She lived at her fathers home on the Saint John's River across from the Union controlled town of Palatka. This allowed her to gather information very effectively. When she heard the plan to attack the Confederates, she traveled to warn Dickison by herself.

Once Dickison got the news he proceeded to rally his men and crossed the river to set a trap. Early on May 22nd, the USS Columbine began to make its way up the river. That's when Dickison's soldiers opened fire on the warboat which disabled it. Once the boat eventually floated to the shore, all remaining Union soldiers were captured. Once all the supplies were taken off the ship, it was burned to prevent it from being taken back.

Dickison, Mary. Dickison and his men reminiscences of the war in Florida. Gainesville, FL. University of Florida Press, 1890.